The part of Kyoto I’m in is very upscale and has tons and tons of fancy shops. I wanted to take a walk around town today and see what I could find.

It was a late start for me today. I’m getting a little more acclimated to the time now, so waking up extra early like I normally like to do is becoming a bit more difficult. After grabbing a couple snacks from the lobby and getting ready for my day, I set out at around 12:00. It was right around lunch time, so there were lots and lots of people, but since I ate not too long ago, I decided to walk around for an hour or so before picking a shop.

And to think, there were several branches off this main path that also looked like this.

Inside the arcade are shops of just about anything you can think of. Clothes, restaurants, video game arcades, pachinko parlors, tea shops, US army surplus stores, mask sales men… It was pretty insane and really fun to walk through.

Japan is a country that does not allow the sale of firearms to consumers. That’s actually really wonderful, but then you get silly model shops like these.

Video games have made me weary of creepy mask salesmen.

Hey, look who I found at the end of the Arcade! I could have sworn you were supposed to be in Osaka.

Miles and Miles later, I was starving. Time for lunch! A little more exploring later and I found a little underground place that had an insane lunch special on sashimi. Japan’s food is so amazingly good and is usually criminally cheap. How do they get away with meals like this:

FOR 1200 YEN?? ($11). It’s going to be hard to go back to the states where a meal like this would probably be like $70. The cuts of fish were wonderful and the tempura was fun to eat too! They tempura fried what seemed to be a melon and it was amazing with soy sauce! At the end of the meal, even though I was pretty stuffed, I wanted to try out their little desert special. They had little tiny ice cream truffles powdered with bitter cocoa. They were delectable and would slowly melt into a thick mousse.

One lunch later and the weather really decided to take a turn for the worst. It wasn’t raining or anything, just the opposite. 90°F+ and what felt like 100% humidity. Guh, there was no way I was walking in this. I went back to the hotel to rest up a little bit and decided that I would go out a little later in the day when it wasn’t so miserable outside.

My hotel sat a couple miles away from Gion, an older part of Kyoto known for its long alleyways of gorgeous (read, expensive) restaurants and Geishas. I wondered what I’d find down there, so I took a walk, hit the subways, then wandered all over the place. This was definitely another tourist hot spot. Rightfully so, I suppose, since the area was very pretty, though the crowds were a bit nuts. Down the beaten path I walk first, eventually coming across the brilliant Yasaka Shrine right at the end of the street. A magnificent temple campus with lots of huge orange gates, lanterns, and lots of Zen architecture and statues. The main entryway was pretty crowded with people that have been drinking a biiiiiiit too much, so I wanted to get out of there and get a little deeper into the shrine. I walked up to the humble cleansing fountain, spooned a few ladlefuls of water over my hands, then put the ladle back exactly as I had found it. Off into the temple.

Walking a little deeper into the campus and you will find the many huge ropes attached to bells to be rang by those who wish to pray. Just beside the bells was a huge collection of lanterns above what appeared to be some sort of stage. It was brilliant! My camera couldn’t really cope with the brilliance of the lanterns against the darkness of the night. For the next few photos, I had to adjust my exposure time to about 3 seconds, so I apologize for any blurring.

A stoic stone protector of a tiny Zen fountain

Said Zen fountain. It was so peaceful.

Further still I wander into the temple, when suddenly, I was alone. I was too far away from the entrance for any of the other tourists, so I was isolated in my own little section of the temple. I love when this happens. I continued on and soon after a set of giant stone stairs…

After that moment of serenity, it was time to jump back into the fray. While the main streets were pretty hopping, some of the tiny alleyways were sparsely populated. I headed down some of the darker, less crowded alleys and found tons and tons of very fancy, very exclusive, very expensive restaurants. The walk was quite pretty though. There was a certain charm to all these traditional buildings, each with their own red lantern outside. 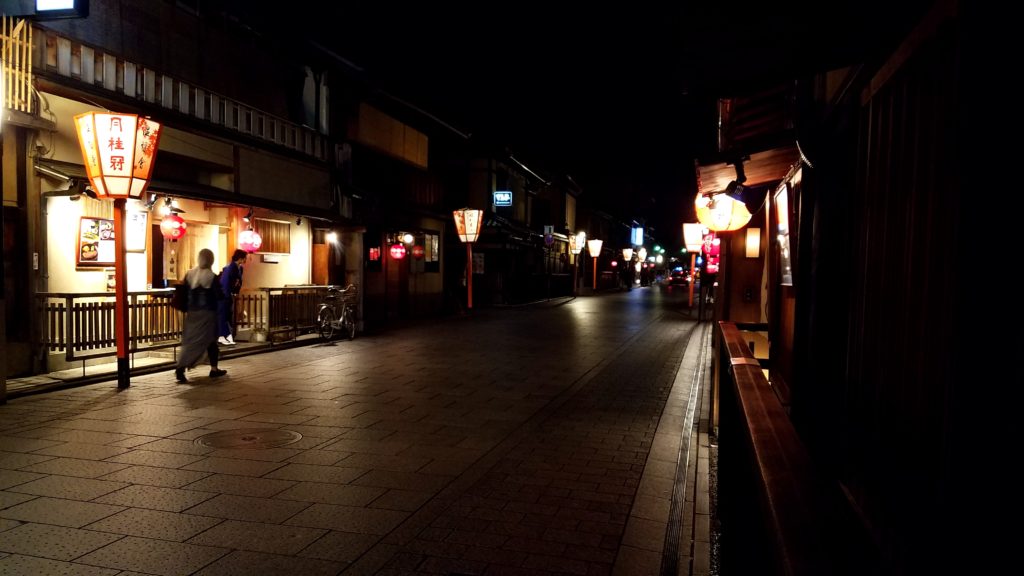 I walked down these maze-like alleys for hours. I enjoyed the walk since this was a quieter part of town. Just then… Was that a Geisha? A Geisha just zipped into that building. I begin to walk down that lonely street and suddenly…
I was face to face, alone with another Geisha in a brilliant red Kimono. Whoah…
This was a unique moment for me. Normally, Geisha are absolutely swarmed with tourists trying to take photos with them, and yet, here I was, for just a few seconds, all alone with one.

I looked her in the eyes and said, “こんばんは” (Konbanwa, Good Evening). She softly replies, “こんばんはございます” (Konbanwagozaimas, A more respectful Good Evening). I walked past, and that was it. What a crazy little moment that was. It was so quick that I could barely process it. Neat.

Dinner time yo. I want something fast, delicious, and packed with meat. Kyoto obliged when I found a small bar-style restaurant that served huge bowls of various thin-grilled meats. A sign out front read, “No meat, no life.” No truer words have been spoken. Chicken, skirt steak, pork, you name it. All charred up on a grill, piled high into a big bowl of rice, then slathered in a deliciously savory

spice sauce. Why is Japan so delicious? How will I cope without it?

Finally, after that wonderful huge-normous meal, I was beat. I walked for a couple more miles (while full, ughjkfds), then hit the subways back to my hotel. On the way there, there was of course, many vending machines. Even though I exclusively drink water, there was on drink there that I’ve always wanted to try. Japan’s infamous Pocari Sweat. Yes, not “sweet,” sweat. What an odd name. I’ma’ try it.