Morning comes and I’m up bright and early writing away. I remember the hotel staff mentioned that there was “free breakfast” served in the morning, and I wondered when that was. I found my little information card and it was breakfast was served up until 9:30… it was 9:25. I quickly got dressed and booked it to the lobby, only to discover that there was ample food left and even some nifty auto-grinding coffee machines.

I stocked up on lots of free pastries, grabbed a cup of coffee, then headed back to my room. The pastries were… meh. Hey, at least they were free. With that light breakfast out of the way, it was time to find something to do today.

The subways confused me last night. I needed some more practice with them. Since I was in Kyoto, I thought I’d take a trip down to the less glamorous part of town and see the headquarters of a company that I loved for all my life. Nintendo.

I had no intentions of going inside the buildings (not like I could anyways!), but I thought it would be cool to check out where nearly 40 years of digital magic came from (Nintendo as a whole being founded in 1889!). Going down to Nintendo would require several subway rides to and from, so it would be perfect to practice a little more. I chose to take the subway from my hotel to zip down to the next subway that would take me to Kyoto Station. From Kyoto Station, I would walk the remainder of the journey since I’d like to see a little bit Kyoto too. 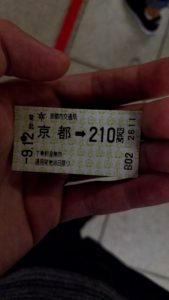 Turns out, after using the subways so many times in a row, I managed to figure out the system pretty well. You don’t need to select a city on the ticket screens. Simply find the “You are here” on the big route maps placed above the ticket machines, follow the same colored line as the “You are here” to your destination stop, then look at the black number (red number is for child prices) to find your fare. Simply place that fare into the machine and automatically a button will appear representing the ticket value of the money you just inserted. Press that button to receive a ticket and that’s all you need to do.

Take that little ticket, put it into the receptacle at the gates and continue to walk forward. Immediately, your ticket will pop out from the other side. Grab it and you’re good to go.

Another thing that I learned while on the subways is that you need to pay close attention to the signage. Failing to correctly read the signs may put you on the wrong station platform or put you on a train that goes off in some random direction.

Alright, my quick trip through the tubes has concluded at Kyoto Station, now it was time to march. There was some light, intermittent rain, and the skies were mostly grey and gloomy. It was still rather warm and humid though. As I walk, the high-class and upscale Kyoto that I saw near the train station began to fade into rusty industrial hues. The smell of the environment also changed – Much more of a petroleum smell in this side of the city. It was definitely less glamorous than the main tourist hot spots, but this looked to me like the real side of Kyoto. 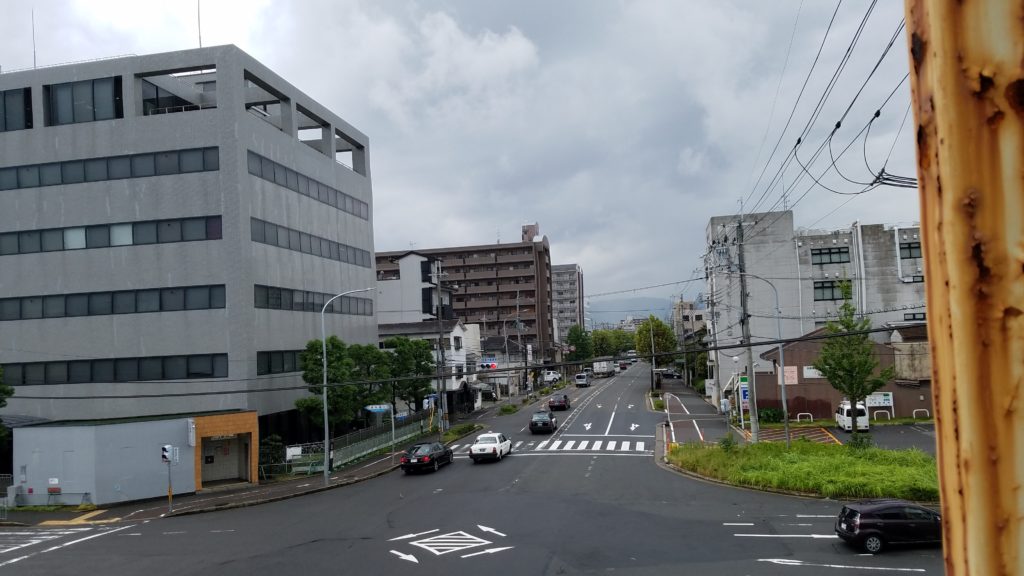 Rust, gray concrete, lots of power lines. The gritty industrial side of Kyoto.

But, amidst that sea of boring grey concrete lie a bastion of magic and goodness inside of a gleaming white tile building. 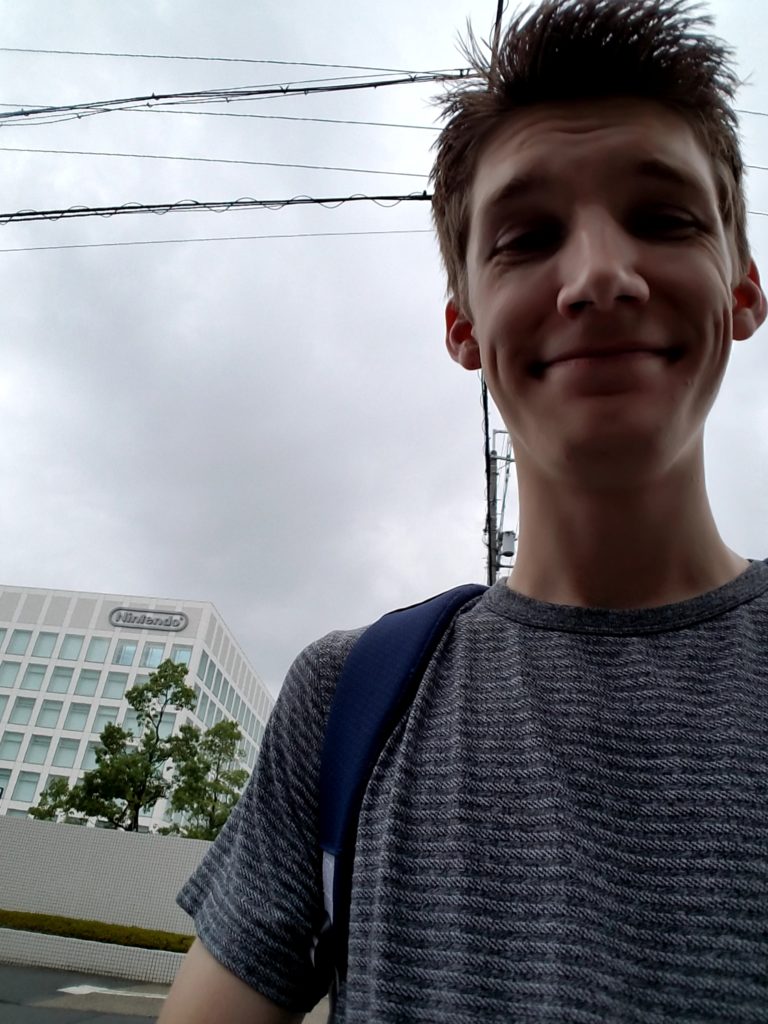 Hey! We made it! That is the Nintendo Research and Development Building. 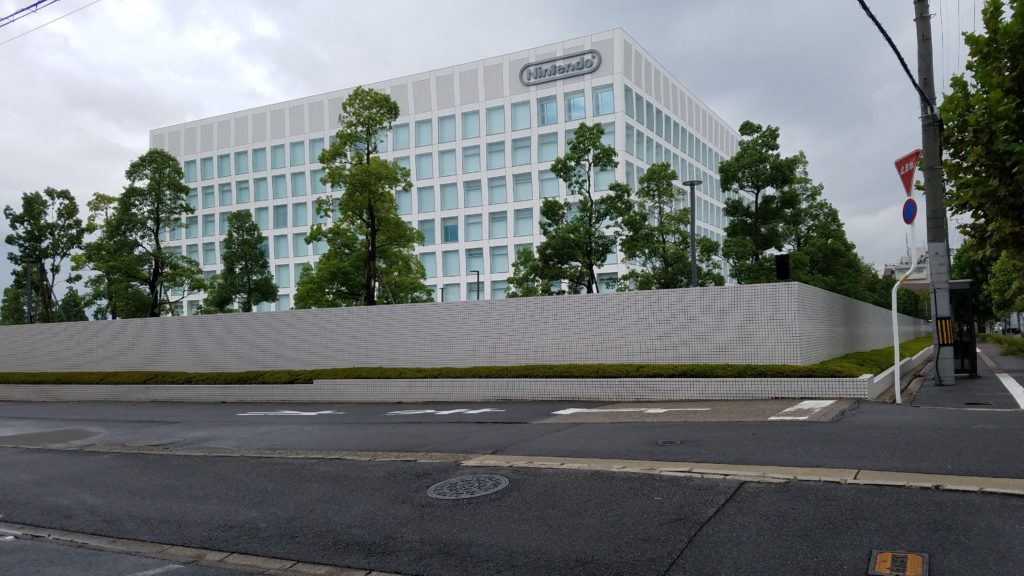 So much colorful, happy magic came out of these buildings, even though they’re pretty plain and boring looking. 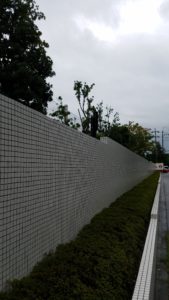 An infrared tripwire system found atop the Nintendo wall.

I took a walk around the perimeter. It was hilariously clear to me that I was indeed not the first fan to come walking through this area. Judging by the grassy barrier, the super tall wall, guards, gates, and even laser trip wire systems, I don’t think I was going in for a visit. Still though, it was really neat to see this place in person. I’ve always looked up to Nintendo for their impeccable design and they’re countless brilliant games.

A bit of a walk around the campus, and soon you will find Nintendo’s main headquarter building. 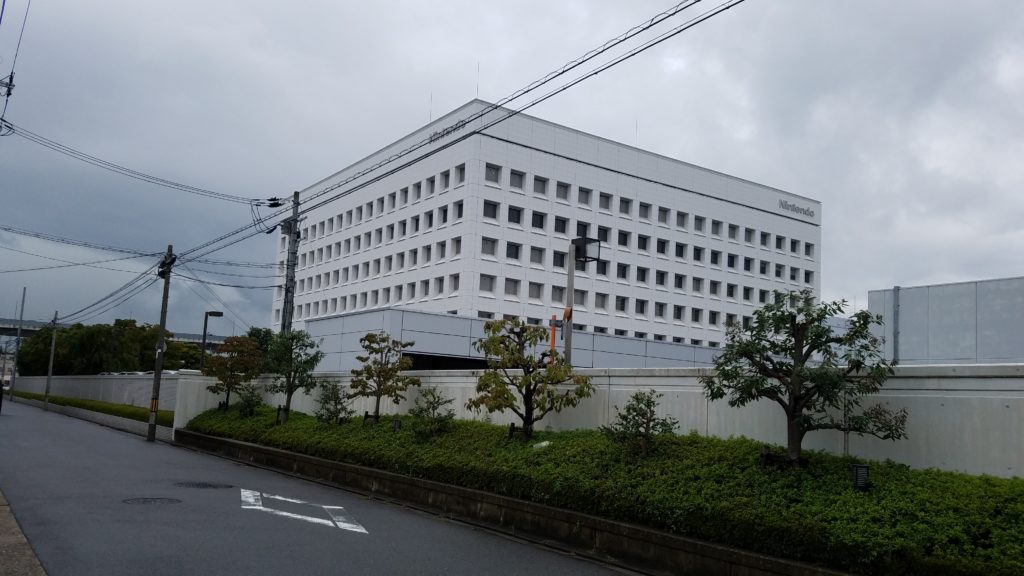 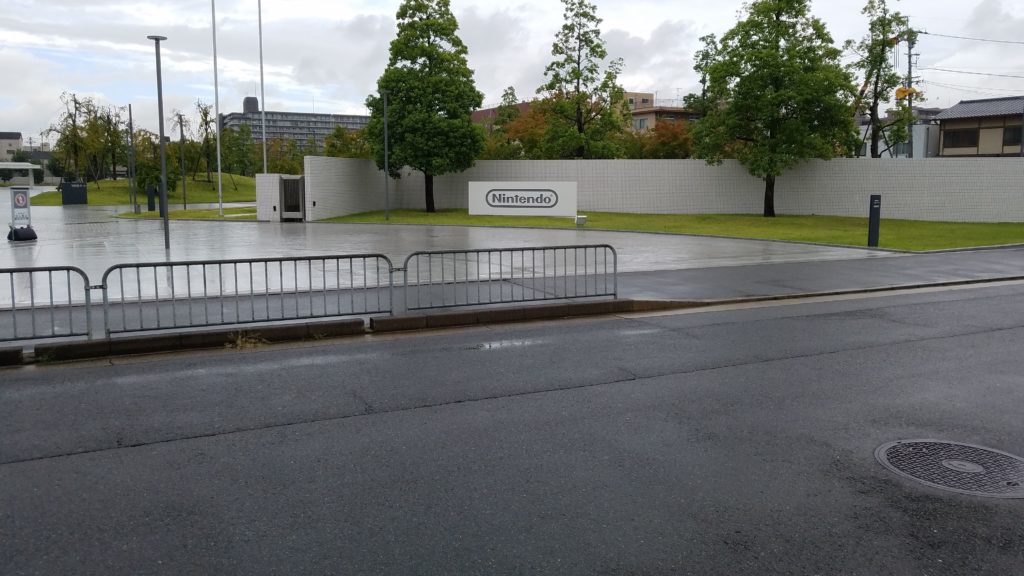 The main campus gate and sign. Notice to the left, a small sign that forbids any visitors. There was a giant Pikachu banner in the guard office though!

Seeing the Nintendo buildings was super cool and all, but this trip actually had an ulterior motive. I suspected that deep within that industrial park lies some pretty killer places to eat. This area of town was clearly not designed for foreigners. The English subscripting on all of the signs had vanished, announcements were not bilingual, and all the restaurants and shops in this area were small mom-and-pop operations. Directly across from the Nintendo campus lies a tiny Udon noddle shop. It was a little late into the lunch cycle (13:00), so I wondered if they were still open. Yep, open, but not very crowded. There sat one man that I could have sworn was Miyamoto at first glance and I almost died… but upon further inspection, it was just a normal person. Oh well. I ordered up the daily special and looked around.

On the wall was a collection of signatures that I could only assume were from big Nintendo names stopping by for a bite to eat. Keep in mind that this shop was directly across the street from Nintendo. 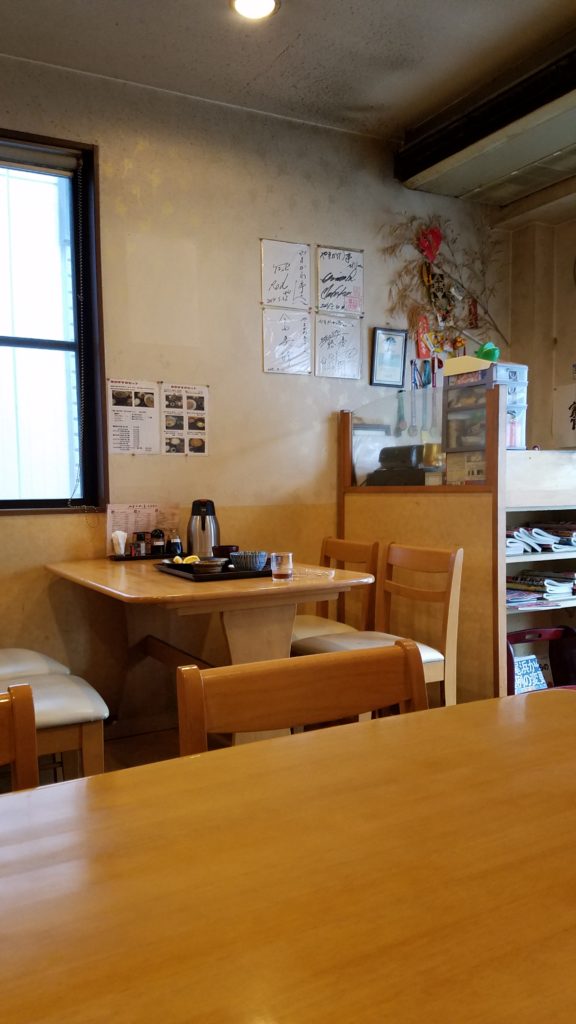 Some signatures on the wall.

Lunch arrived and as always, it was stupid delicious. It really is going to be hard to go back to the US when all the food here is just to die for. 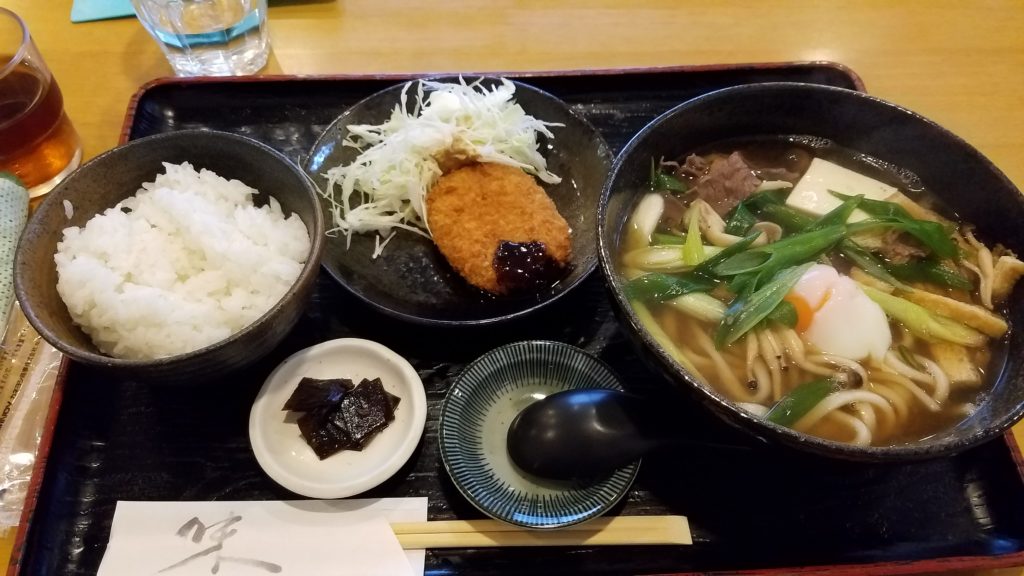 Fun fact: There is also an enormous Porsche dealership right next door to Nintendo. Tons and tons of beautiful cars, good food,  AND Nintendo. This was a super fun spot in an otherwise dull industrial park. 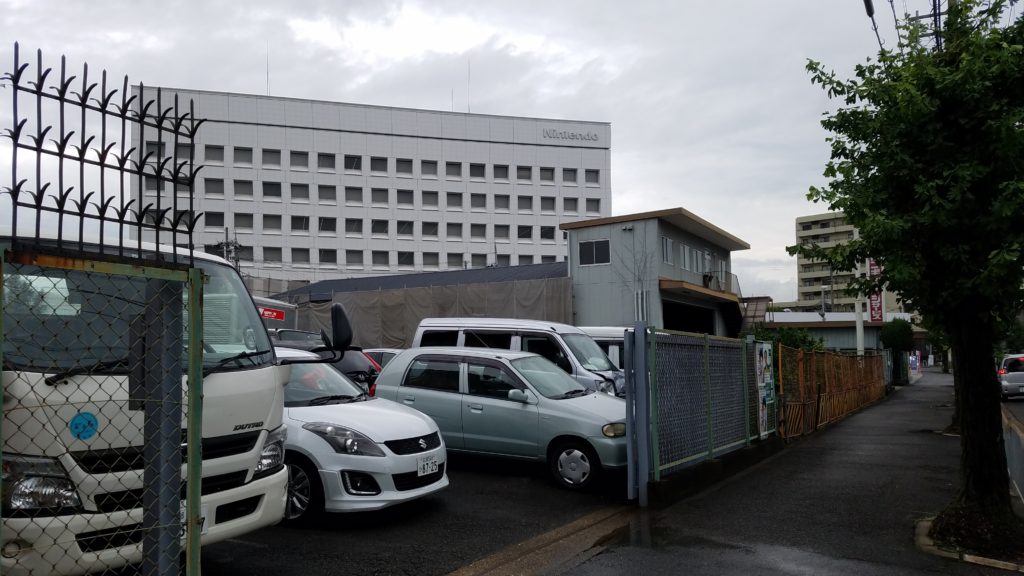 You can see that the Nintendo building really stands out inside this rusty industrial park.

I took one last look at Nintendo HQ, then I did a little more walking through this area of Kyoto. I eventually crossed over the Kamo River. I found it interesting that the embankments of the river were thoughtfully designed to contain Tsunamis should one ever pass through. Eventually, I found my way back to the subways and made my way to my hotel for a little rest after my long walk. 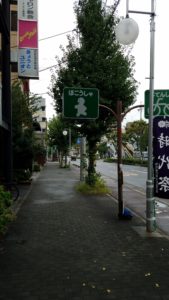 My next adventure for the day was to seek out one of those crazy conveyor belt sushi restaurants I’ve always heard so much about. I managed to find a highly-reviewed one, but it was back at Kyoto Station. BACK TO THE SUBWAY! I’m getting lots of practice with the subways today – I’m becoming a pro at these trains.

After getting lost in the enormity of Kyoto Station, I eventually found the restaurant. There was a short line out the door, so this place must be good. This was actually the first time I had to wait for a restaurant in Japan. Twenty minutes later, and I was seated at the rotating sushi bar. Chefs worked tirelessly to constantly restock the conveyor belt while patrons grabbed any piece that looks good to them.

Prices were determined by plate color. The standard white and blue plate was 143 yen. A multi-colored plate meant the price was still 143, but contained no wasabi. Finally, a gold and blue plate was for premium cuts, costing about 350 yen.

I ate what I felt to be lots and lots and it only amounted to about 1200 yen (~$11). So good. So affordable. There were a couple rolls there that just cranked the wasabi factor up to 11 though. They were super yummy, but every piece set my sinuses ablaze for a short few seconds.

I liked the little conveyor belt sushi idea. It was fun to see what magical things went by and you got to try anything that looked interesting. Fun!

I ended my night with another short walk through the Kyoto Station area and finally jumped on the subway back to my hotel. I’ve gotten pretty good at these things today!