More meat for the meat gods. Today was going to be a special day. I was going to take a day trip from Kyoto to Kobe and indulge on what is rumored to be the finest cuts of beef in the world. Kobe Beef.

Lots of blogs, travel documentaries, and YouTube videos claim that Kobe beef is the be-all-to-end-all divine food and is usually described as “the best thing I have ever eaten in my life.” Would Kobe Beef be the best thing that I have eaten in my entire life? I’ll travel down to Kobe and find out!

I got ready, prepared my backpack, then jumped on a train towards Kobe. I skipped breakfast this morning, so I was super hungry and really raring to go for this meal. I accidentally missed the Shinkansen sitting right in front of me headed towards Kobe, so I had to opt for the slower generic train. The ride was much longer, but there were many cool sights along the way, so I enjoyed the ride.

An hour and a half or so later, and I arrived at Kobe Station. It was another hot and sticky day, but since Kobe was near the ocean, there was at least a cool breeze. I didn’t have any particular steakhouse in mind, so I pulled up Google Maps, found a highly rated restaurant down the street a bit, then took a walk-through Kobe. It was only about 2 miles away, so the walk wasn’t that bad, however; Kobe is a bit more mountainous that the cities I have previously visited, so dealing with the verticality of the paths was pretty tiring at times. Finally, I get to the steakhouse annnnnddd…

There’s a sign on the door that says they will be closed for renovations between the 12th and the 17th. Ughh.. I seem to be running into a lot of closed restaurants on this trip. Okay, whatever. About a quarter of a mile west lies another highly reviewed steakhouse within a hotel. Alright, let’s check that place out.

A little walk in Kobe

Now normally, Kobe Beef meals are served on a teppan by a chef in front of you, but since I didn’t have a reservation, I had to order from an ala carte menu. No big deal, I was here for the beef, not the show. Soon I was seated in an opulent room with a big fireplace and smooth jazz music playing softly in the background. I love that lots of restaurants and cafes stick to smooth jazz and swing music – it makes everywhere feel fancy!

I await my meal.

I call over the server, then order the most expensive cut of Kobe Beef on the menu… and some rice too, of course :)

Moments later, I’m greeted by a perfect cut of medium-rare Kobe Beef, various sauces and toppings, and a big bowl of rice.

In the center was the cut of beef along with some tiny fried potato rings. To the top right was black salt, miso paste, and a pickled radish paste /w green onions. The sauces were tomato sauce and soy sauce. I was instructed to mix the radish paste and green onions into the soy sauce. To eat the beef, I should first dip the piece into the black salt, grab a little miso paste, then dunk into tomato sauce, then dunk into the soy sauce. Lots of steps per piece, but then I took my first bite.

I think Gunnery Sergeant Hartman from Full Metal Jacket sums up my reaction quite well.

That was an unreal cut of meat. I’ve never experienced meat that was this tender before. It was savory and delicious! Easily the best steak I have ever had in my life by far. Wonderful, to say the least.

You know, I’d say yes. Not just for the flavor of the meat, but for the experience. I can now say that I have genuinely tried Kobe beef in the actual city of Kobe. Just that little talking point alone I think is worth the price tag.

Is it worth traveling all the way to Japan just to try this meat?

Nah. Trust me, it was a delicious steak, but people kinda’ hyped this waaaaaay too much. If you’re in the area and you’ve got a budget surplus like I did, by all means, come down and try it. You won’t be disappointed! If you save up and spend years preparing for just this meal, you’ll probably be let down. It’s a ridiculously good steak, but it’s not a life-altering, “touched by god himself” meal. Dare I say, the Sushi that I first tried at The Sunshine City Mall in Ikebukuro is still my favorite meal flavor-wise that I’ve had so far!

Gotta’ say though, that meal changed the steak game for me. That tender umami bomb was awesome!

I finished up the rest of my meal and was asked if I’d like a coffee to finish up with. Sure, that sounds great!

If we could end meals with really good coffee each time, that would be awesome.

I got a little coffee set with really good creme, then just took in the atmosphere and reflected on my meal. I like livin’ the good life. I’ll keep working hard and saving away so I can do stuff like this more often.

I finished up, accepted that I will not be having a budget surplus today, then released myself into the city of Kobe for a little while. I wandered only for a short bit before stumbling into another one of those crazy huge shopping arcades. 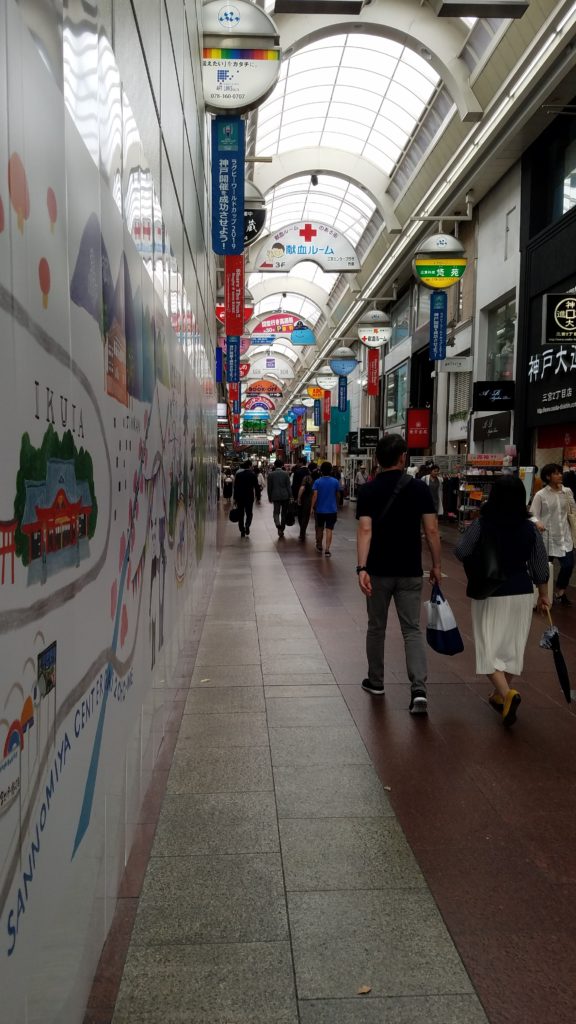 These arcades really do feel infinite

In Japan, it’s almost guaranteed to be handed fliers and give-away items when walking through shopping centers. Nearly every store has a vendor barking at the crowd and attempting to pass out fliers promoting their business. In the center of the shopping arcade, numerous promoters walked around in brightly colored vests plastered with promotional information and signs with more information strapped to their backs. At first, I thought they were just a health company promoting their products, but once I walked by, I was given some of their promotional material.

It was a pack of tissues with a promo card in it! They were the Japanese red cross and they were promoting a blood drive! Ahhh, I see! 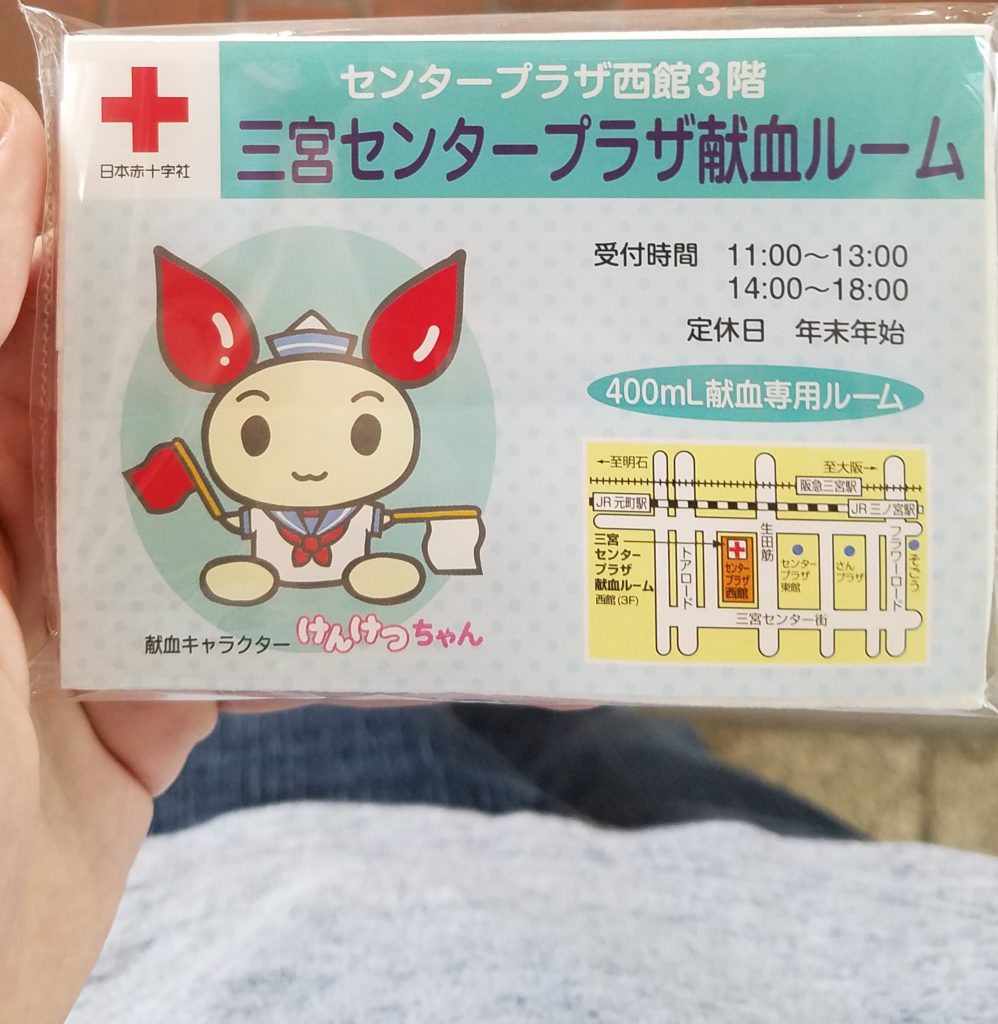 Of course there is an adorable blood-donation mascot. This is Japan! He is けんけつちゃん, “Kenketsu-chan”

I spent a couple more hours wandering around Kobe, but didn’t really find too many other things of interest. Other than the awesome steak, it was a pretty average day with lots of travel by train and walking around as usual. I did, however, pass through Osaka a few times on my train rides. Osaka will be my next destination and I CAN’T WAIT!