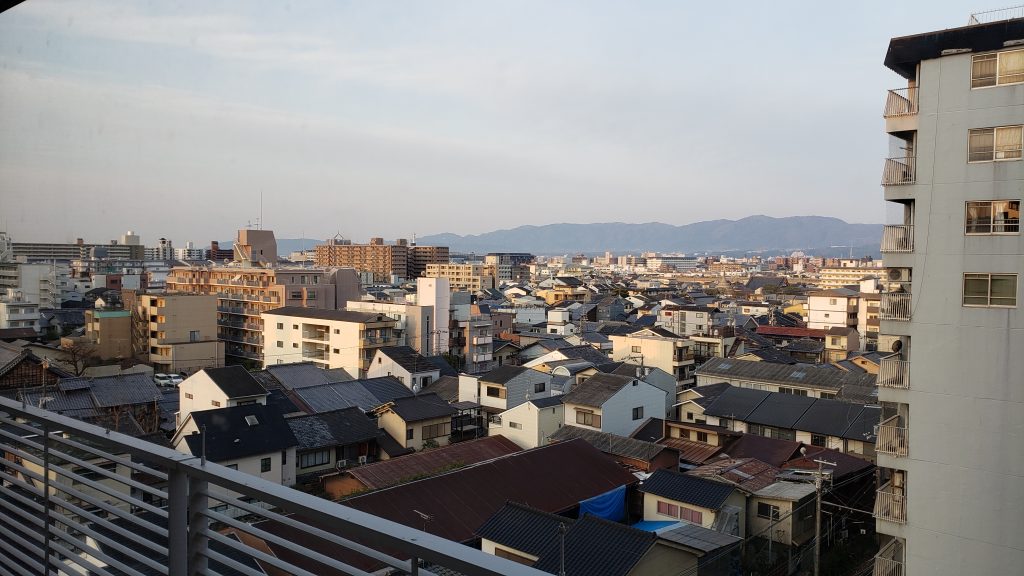 Today’s forecast called for chilly and overcast weather, but the sunrise this morning was very pleasant and relatively clear. Abbie and I started off the day with some pastries that we bought from the fancy bakery stall right near our hotel. 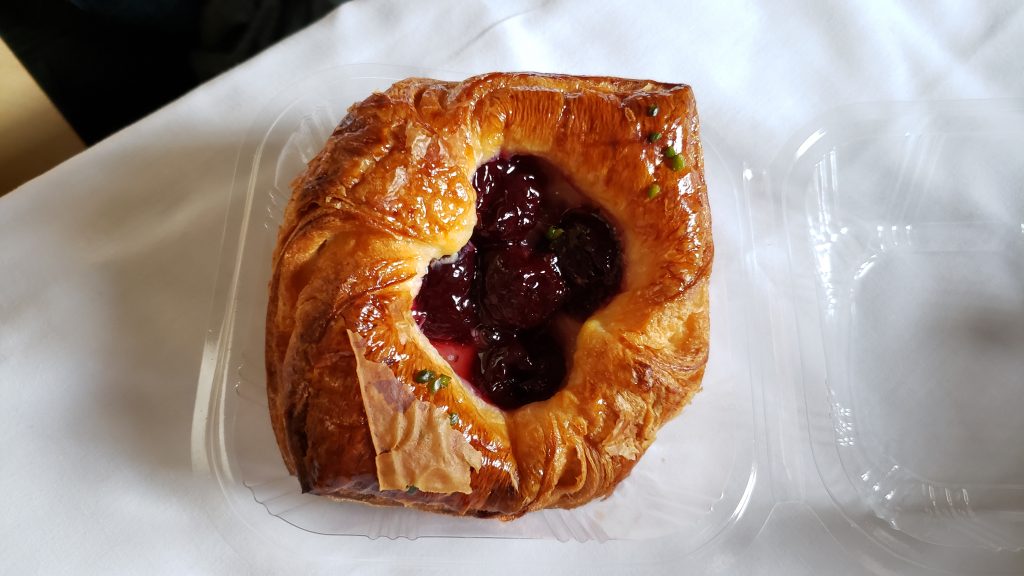 Since we only had one full day here, we wanted to make the most of it. Even though Kyoto has lots to offer, Abbie and I had three major goals:

Today was going to require quite a bit of walking, but we were prepared. At around 9:50, we set out to see a small part of Kyoto.

We made our way to Shinkyogoku and stopped at a cafe for a proper coffee (and cocoa) plus second breakfast, I guess. The coffee here is just SO good. I want to know their secret. 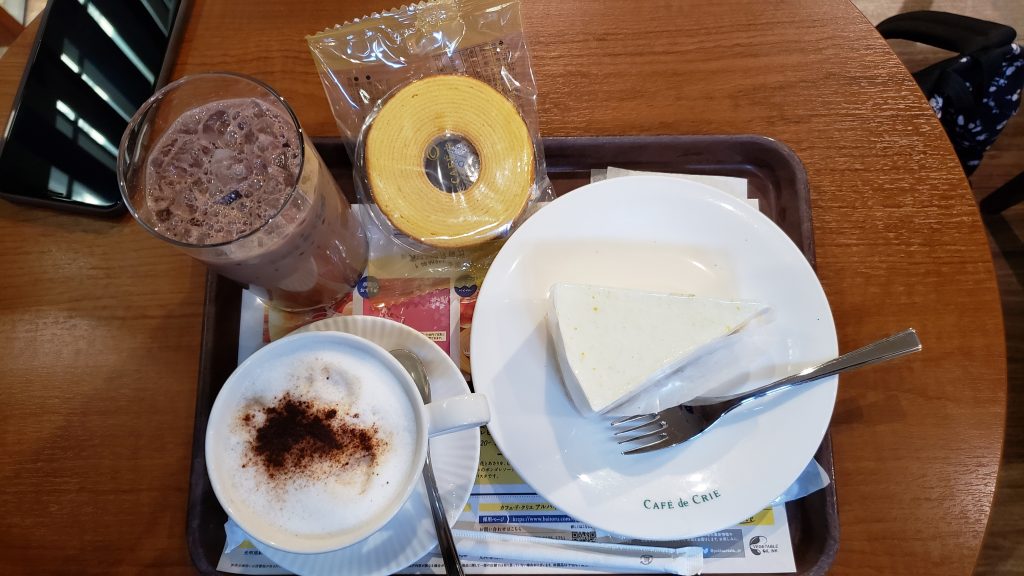 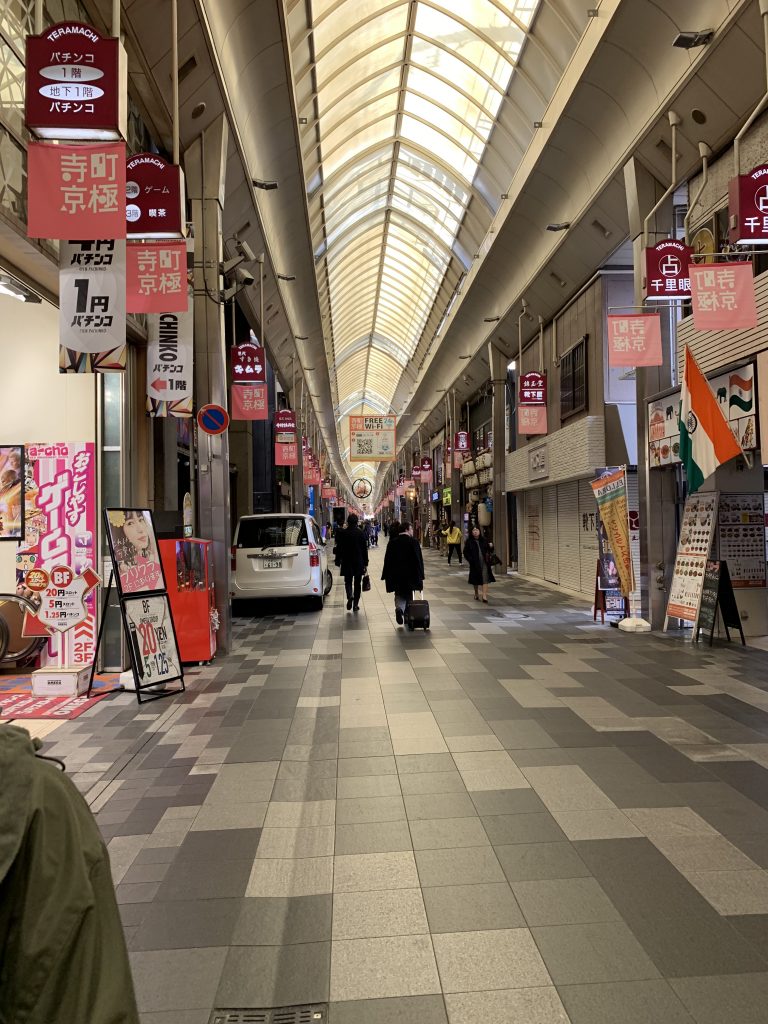 These shopping arcades are always fun. So many shops and infinite variety. You can find everything here! It was about 10:30AM, and most of these stalls opened at 11AM. There was a little stationary store that we decided to visit to kill some time while we waited for the rest of the stores to open.

This was heaven for Abbie. Fancy pens, paints, papers, tapes, inking markers, and any color you could think of. “You shouldn’t have brought me here, I won’t be able to control myself,” exclaims Abbie as she holds a fist-full of Copic markers. Copics are specialty alcohol markers known for their legendarily smooth colors and are often extremely expensive in America with their median price hovering around $8 a marker. Since Copics are made in Japan though, they’re about $2 a piece here. 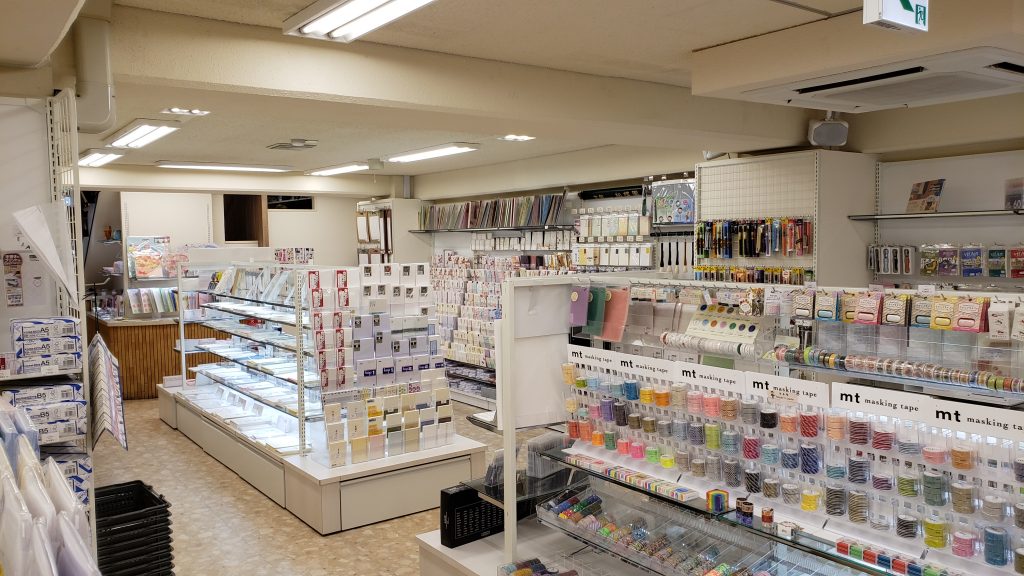 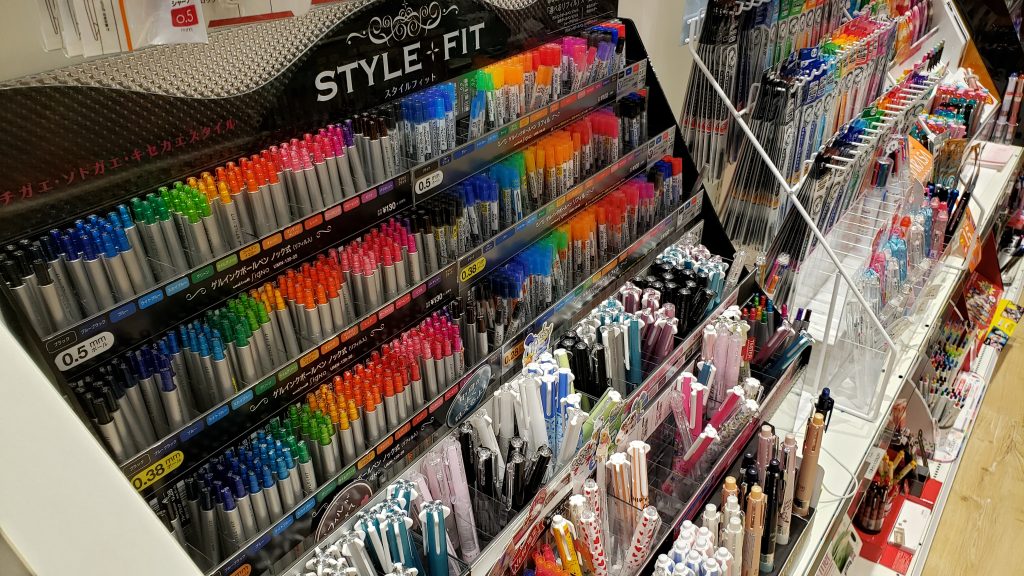 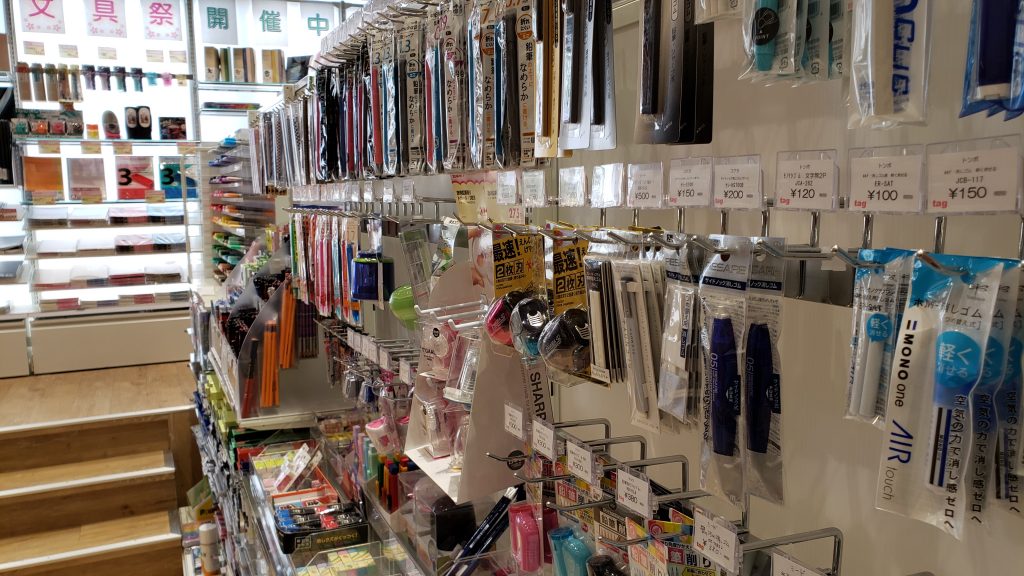 So many things. You can see the display of Copic markers at the end of the aisle

That store was fun. Abbie came out with a haul of fancy markers, pencils, and erasers. We spent quite a while in here, so most of the other stores were now open. This place really comes to life once all of the stalls open up. 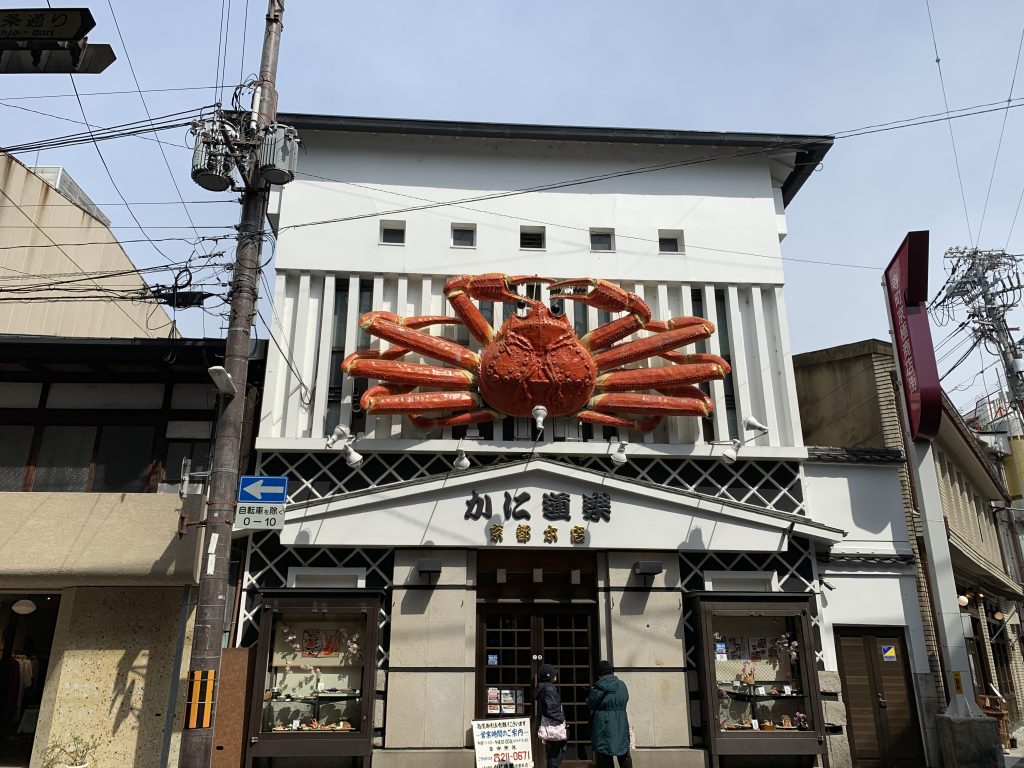 Look! Crab man! We’ll be dining at the same restaurant when we get to Kyoto.

Abbie and I meandered throughout all the different stores. We visited everything from second-hand stores to “upscale-couture” that sold plain-looking shirts for far too much money. We also found a wall of gatchas. There, we witnessed a gatcha dispensing “strong-bird” figures. Glorious. 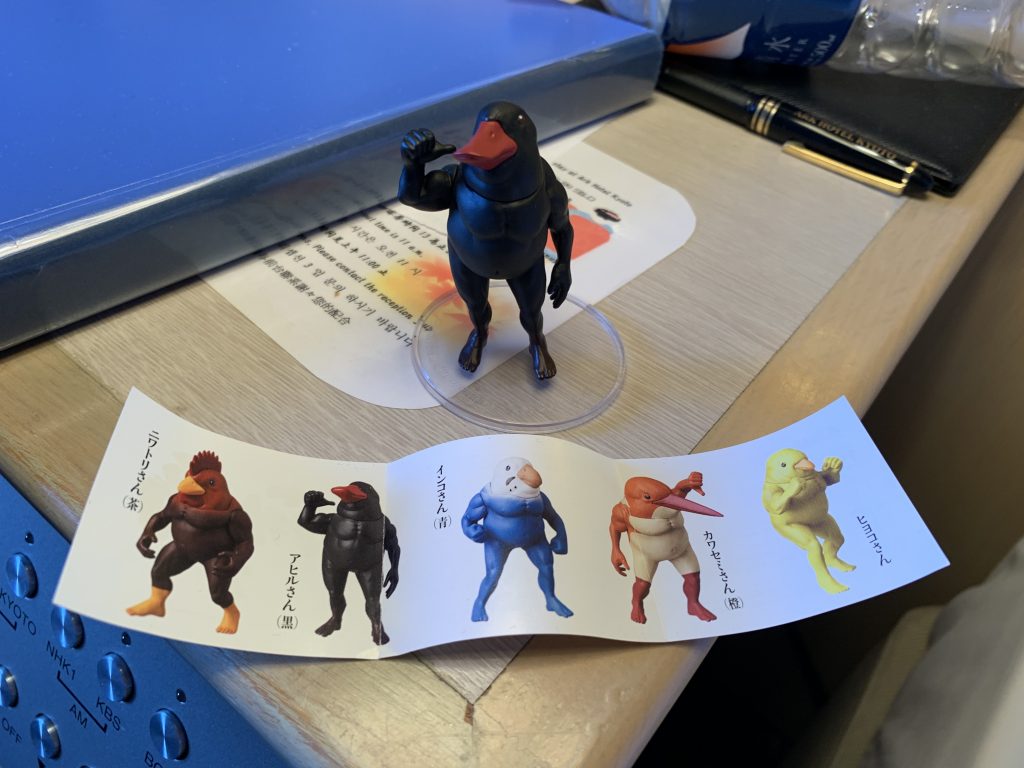 My favorite is the blue Parakeet

There were many stores geared for tourists, of course – a notable one being a shop that sold shirts with various kanji on them. The translations were very strange. One was, “I have a bomb strapped to my leg” in Kanji. Yeah, not gonna’ be taking that shirt to the airport.

Alright, with all that walking, I’ve mostly burned off all of the sweets we had for breakfast. Let’s get a fancy lunch at this restaurant that overlooks the river to Gion. They served Fresh-water eel (Unagi), which is a bit pricey, but unbelievably tasty. Soft, crispy, savory, sweet. Just wonderful! Once Abbie was finished dumping the green tea all over the place (nicely done), we took in the sights and enjoyed a great meal. 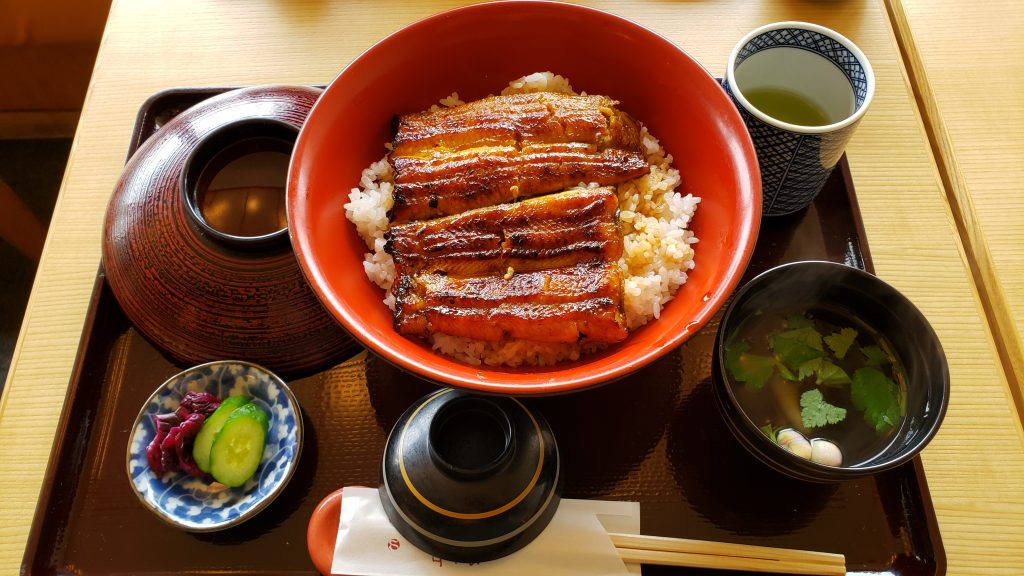 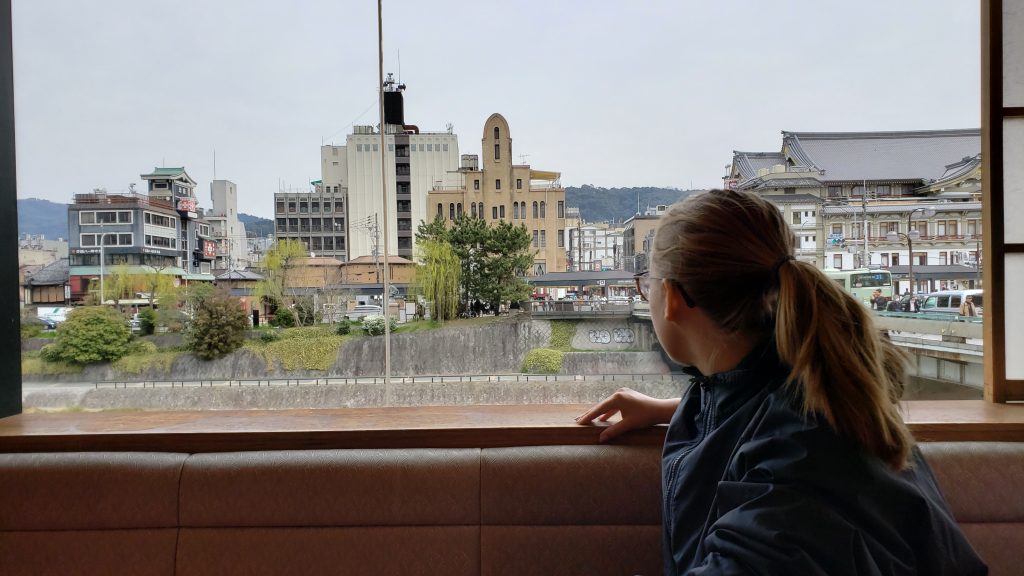 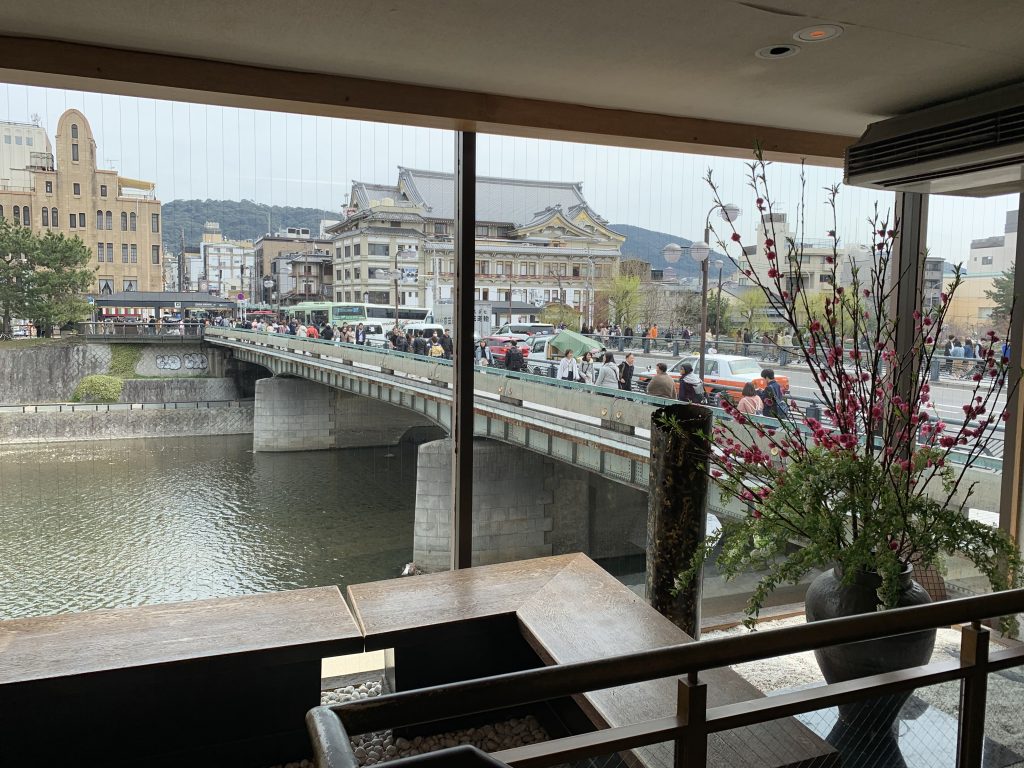 The lobby of the restaurant 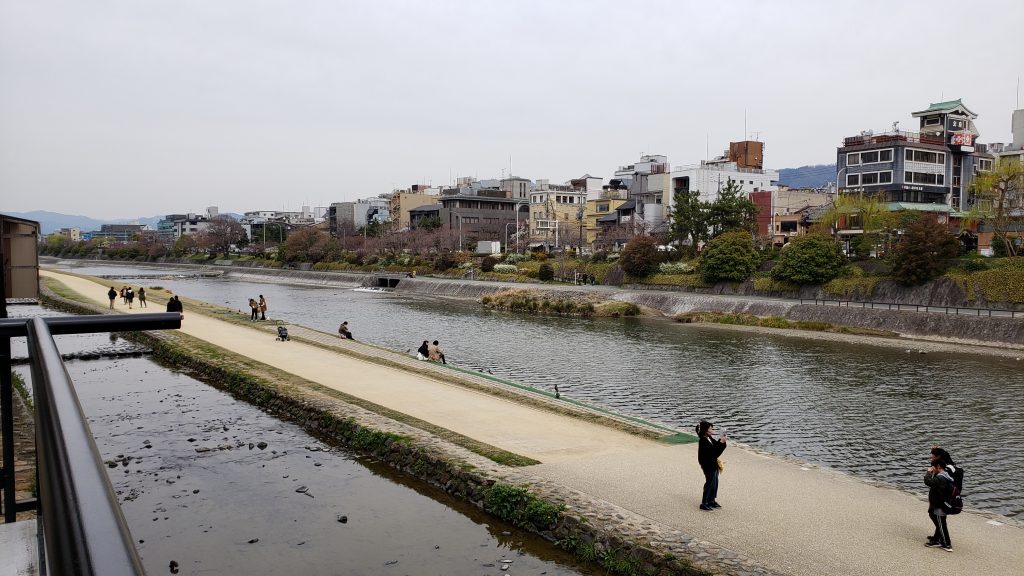 Giant hawks swooped in on unsuspecting tourists brazenly holding their food out in the open. Awesome.

Lunch was great! Let’s hit the streets and head towards Gion. Wow.. it’s… UGH WOW it’s getting SUPER crowded. Man, I don’t remember it being this crowded last time I visited. Though, when I was here last time, it was pretty late at night, so there wasn’t as many tour groups.

Mini-rant: If you’re a guest in a country, you should try your very best to observe the cultural norms and behave in a way that is, you know… appropriate. I am very much aware that I myself am also just a tourist, but I try very hard to conduct myself in a way that positively represents me and the country I come from. A particular type of tourist (you know, the ones that arrive in huge buses, follow flag carriers in massive groups, and swarm monuments just for a few photos before moving on), just seem to have zero respect or tact. It’s slightly disheartening and really takes away from the experience for everyone else. Hopefully, I don’t sound too, “holier-than-thou,” but if you saw this behavior for yourself, I feel that you’d agree.

Complain-y white-boy rant over, back to your travel thing I guess: 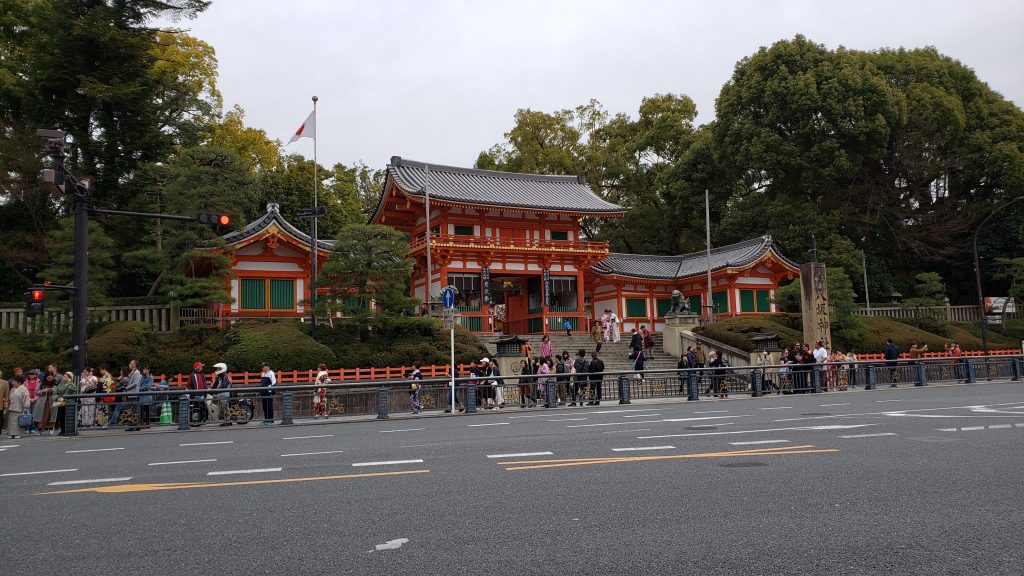 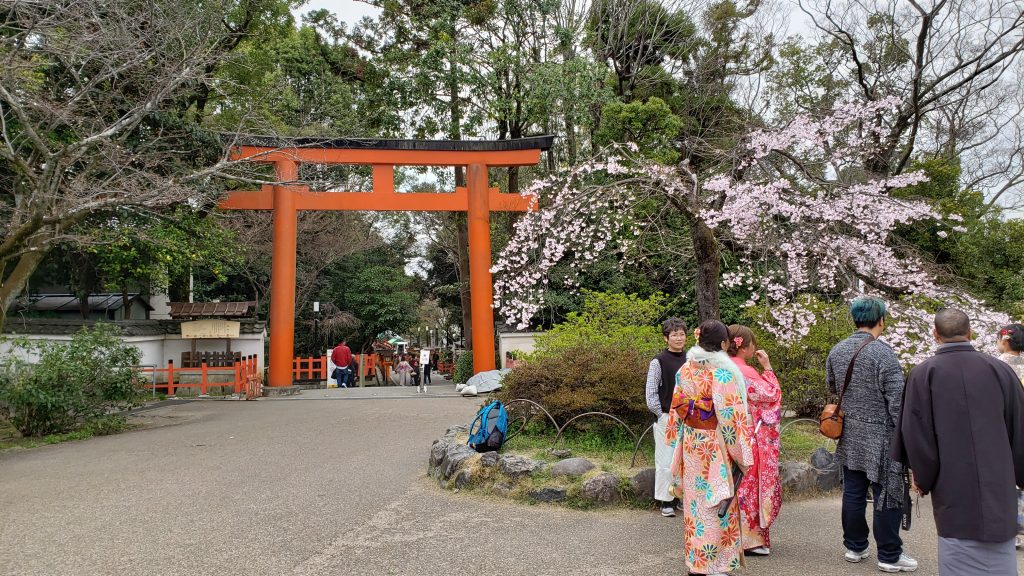 The Tori gate I photographed last time, now featuring one of the few blooming cherry trees. This poor tree was being pulled apart by said tourists for photos. So sad, leave it be!

The crowds here really were insane. Every corner was also populated by tchotchke and food-stall vendors pedaling goods. I suppose that’s fine for what this is, but capitalism kind of takes away from the shinto aesthetic. I sound so whiny in this blog, but bear with me. I tells it as I sees it.

Thankfully, Abbie and I found a relatively quiet koi pond with gigantic fish in it. Look at the little pond-skimmers and the tadpoles! We sat here and relaxed for a little while and just appreciated the gentle giant kois. 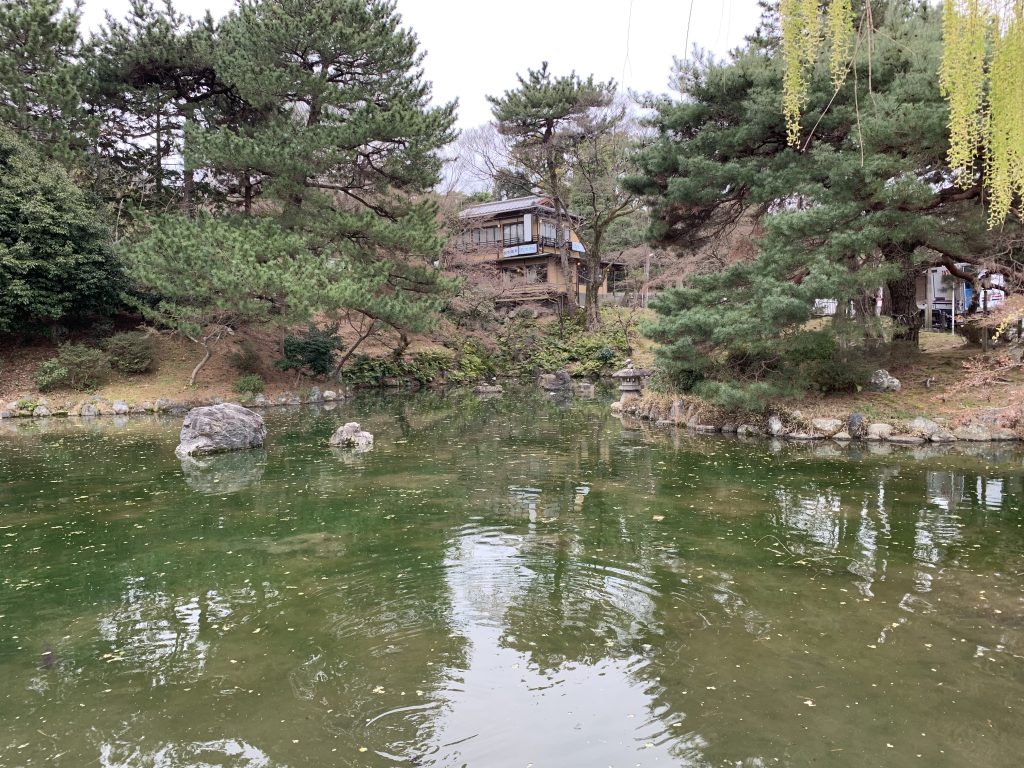 Okay, I’ve had my fill of tacky tourists and crowded spaces. I wanted out. Let’s go to the restroom real quick and get out of here. Oh, they make you buy the toilet paper here. What? Hm, hopefully Abbie read that sign before she… oh.

After a copious amount of hand-washing and sanitizer, we made our escape. Given the circumstance, that could have turned out a whole lot worse. We took a shortcut through some of the side-streets of Gion since the main roads were simply packed with pushy-shovy people. Man, that was truthfully a bit of a disappointment. I remember that shrine being a lot more peaceful when I visited last time. Note to self: night-time is the best time to visit Gion.

I think it’s time we move out of the tourist hotspots and take a brief trip down to Kyoto’s less-populated industrial center. There isn’t anything particularly interesting to do around here, but it’s definitely a bit more of the “real” side of the city. Once we finally made our way to the subway that lead to… well.. nowhere really… the crowds began to dissipate and the world became quiet and peaceful again. Mmmm… that’s more like it.

The stations got smaller. The trains were slower. The people were quieter. We can breathe a little now.

Train tracks at a small station in the middle of nowhere that lead to a more chaotic horizon.

Here, away from the tourist centers, bilingualism fades away. Structures are rustier and less polished. Buildings are less flashy. You could see people going about their daily lives here. Salary men walking back to work from lunch, children playing at their school playgrounds, housewives hanging up their family’s clothes to dry on top of the tall “mansion” apartment buildings. There were even little tiny gardens that dotted the urban landscape. It was a lovely little walk through the real side of the city.

…But why were we here, exactly? Amidst the industrial sprawl of car-crushers, rusty reclamation centers, and other heavy industries lied a pristine set of white buildings. 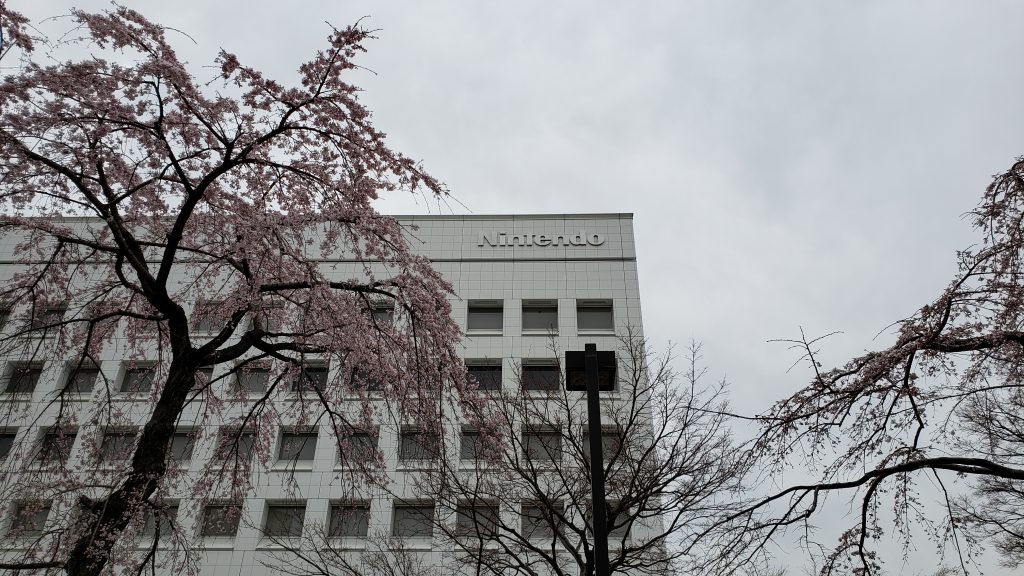 Oh yeah. You know what we’re talkin’ about.

The Nintendo campus is totally a “Welp… there it is. Alright now what?” kind of location to visit, but you know… it’s super cool to see it with your own eyes. Nearly fourty-years of modern fun came from this company as we know it today. Nintendo proper being established in 1889 of course! And their cherry trees were beginning to blossom. How lovely! 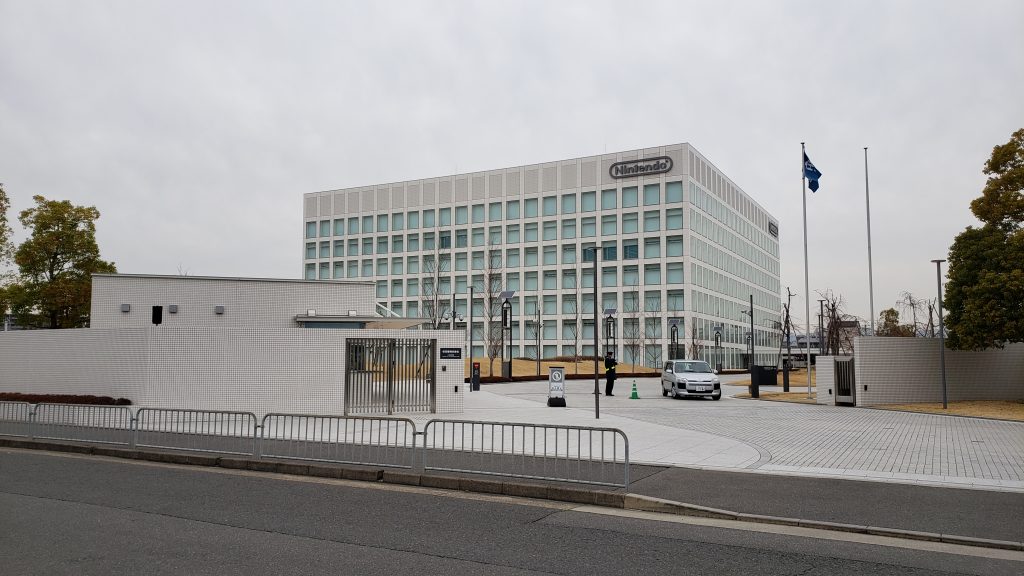 You can’t enter the premises without having an appointment, of course. We saw lots of people walking inside though – I wonder what their jobs were? What influences did those people have on the games and consoles sitting in my backpack? Interesting to think about. 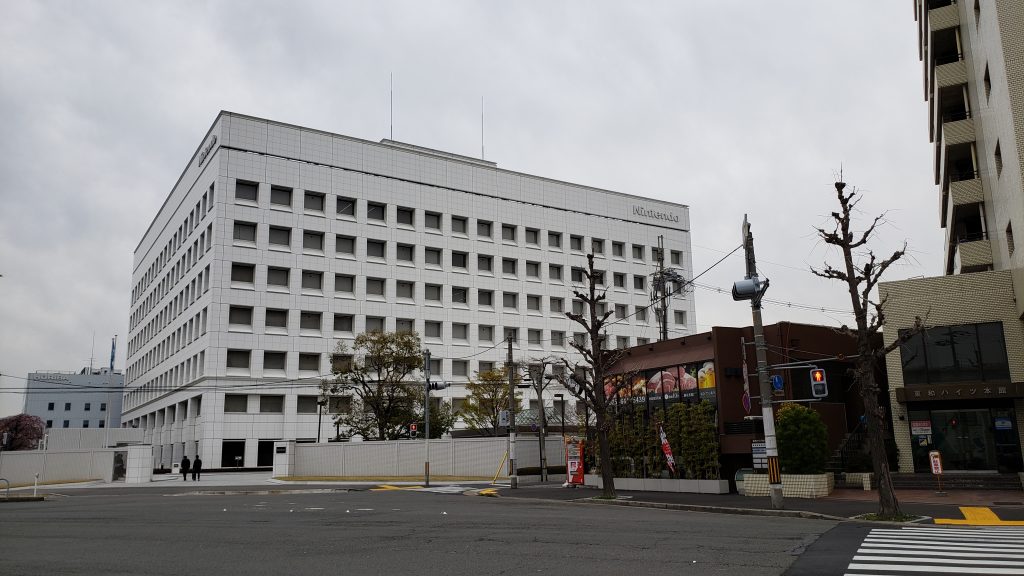 Across the street. I actually did visit that restaurant last time I was here. It was really good! 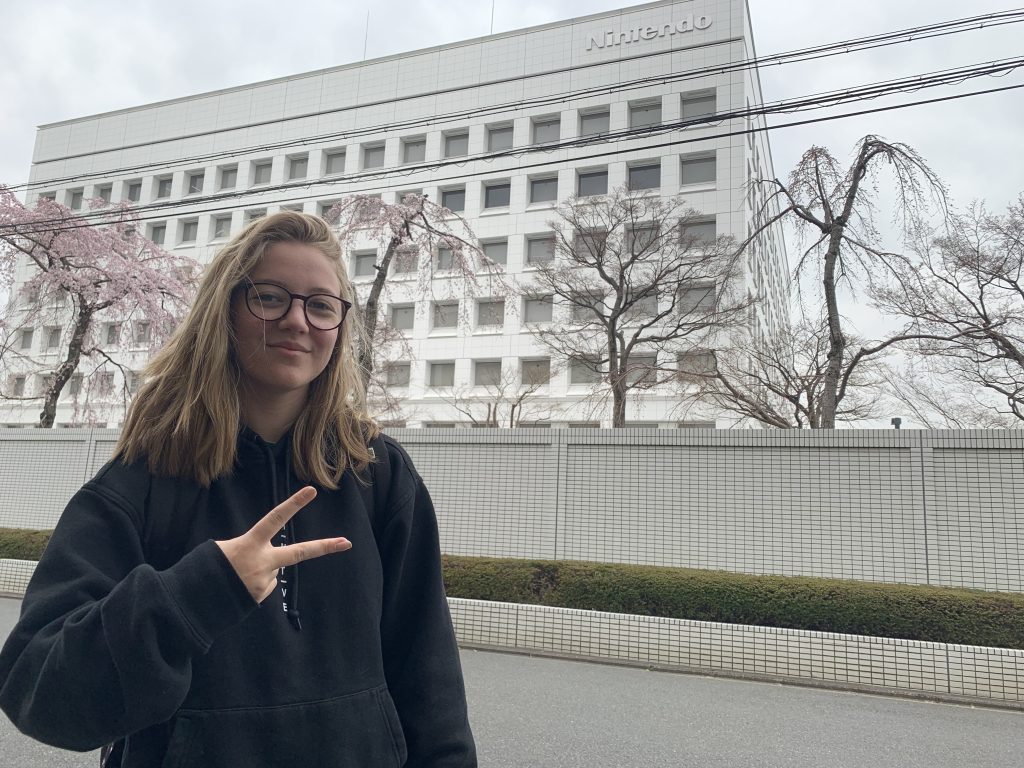 Do it for the snap 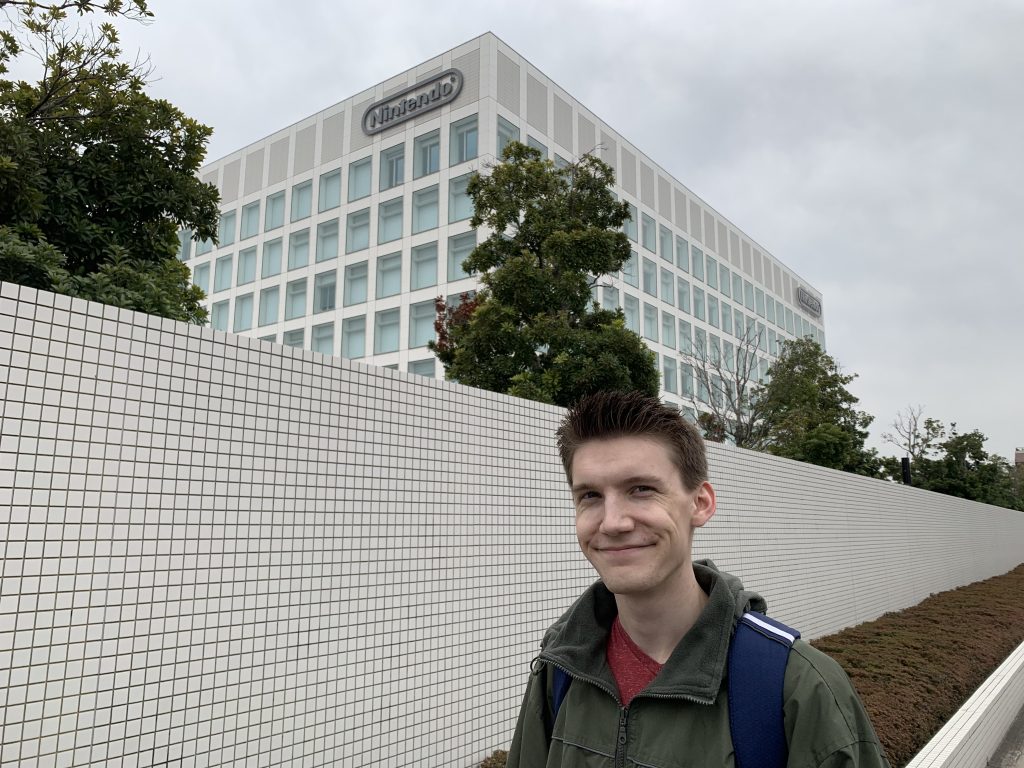 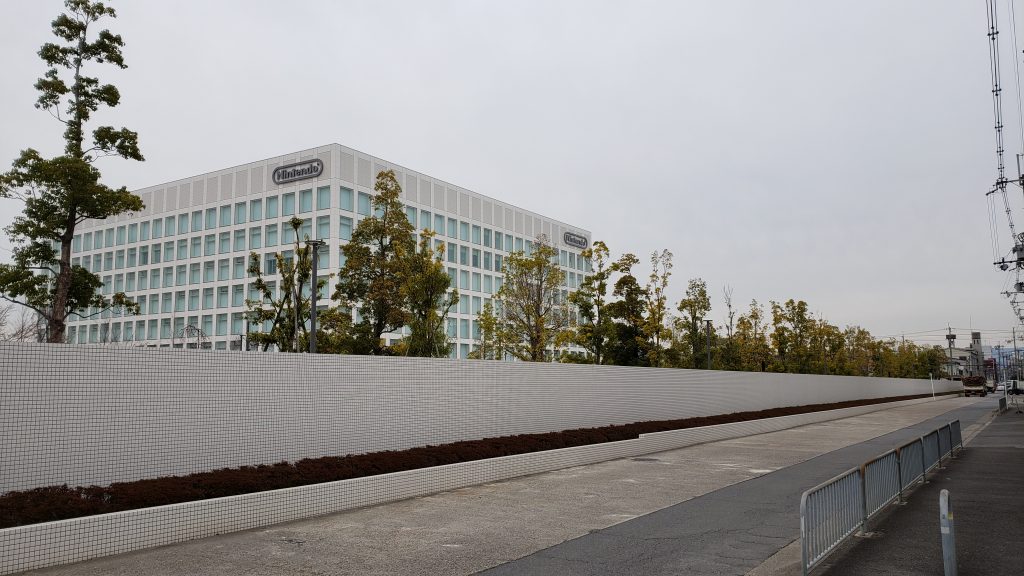 Wonder what they’re working on now.

That was a fun little walking tour. You could see that they had an on-campus tennis court and a baseball diamond nearby. Perhaps these were inspirations for Mario Tennis and Super Mario Strikers.

Alright, I’m wiped. Let’s get out of here and back to the hotel. There’s a train station down the street that will lead us right back to the main street we’re on. Just have to check the fair map and… uh.. wait where’s Shijo…

…maybe I’ll look a little harder. Uh… Shijo station should be on this line. Uhhhhh where is it??

Pro-tip: there are actually two Jujo stations – both have separate lines. Good to know for next time because damn that was confusing!

Alright, we’re back. Let’s take a break and rest up for dinner. What’s dinner going to be?

We arrived to the restaurant and there seemed to be a bit of a wait. That’s okay, we’ll just hang outside for a little while and wait for a table to clear up. We waited for about thirty minutes, and there seemed to be some sort of “scene” happening near the front of the store. Yep, que our favorite type of tourist, the same we saw down at the temple today, violently flipping through the menu (wtf?), and profusely bothering the poor server that was already very busy. The server was trapped helping them the best he could for about twenty minutes – they just wouldn’t let this poor guy do his job. As soon as we were invited into the store, he asks us with an exhausted look on his face, “Sorry, could you wait? Waiting OK?”

“Sure, no problem. It’s okay.” I reassure him with a smile. The aforementioned family ahead of us though – oh no, that was their tipping point apparently. “Is a table ready yet. We are not waiting any longer. We do not want to wait.” (wtf? lady the store is packed, they can’t just magically make a seat appear). I briefly chatted with the exhausted waiter and assured him that we would be patient and that he was working very hard. His relived smile and laugh seemed to quickly put us on his “good-side” and it instantly absolved any fear that we too may in fact be impatient foreigners. Our patience and goodwill was rewarded with a seat nearly instantly right near the chefs preparing the okinomiyaki. Sweet – thanks for the hookup dude!

WELL THAT WAS NEAT I GUESS: back to the food O_o 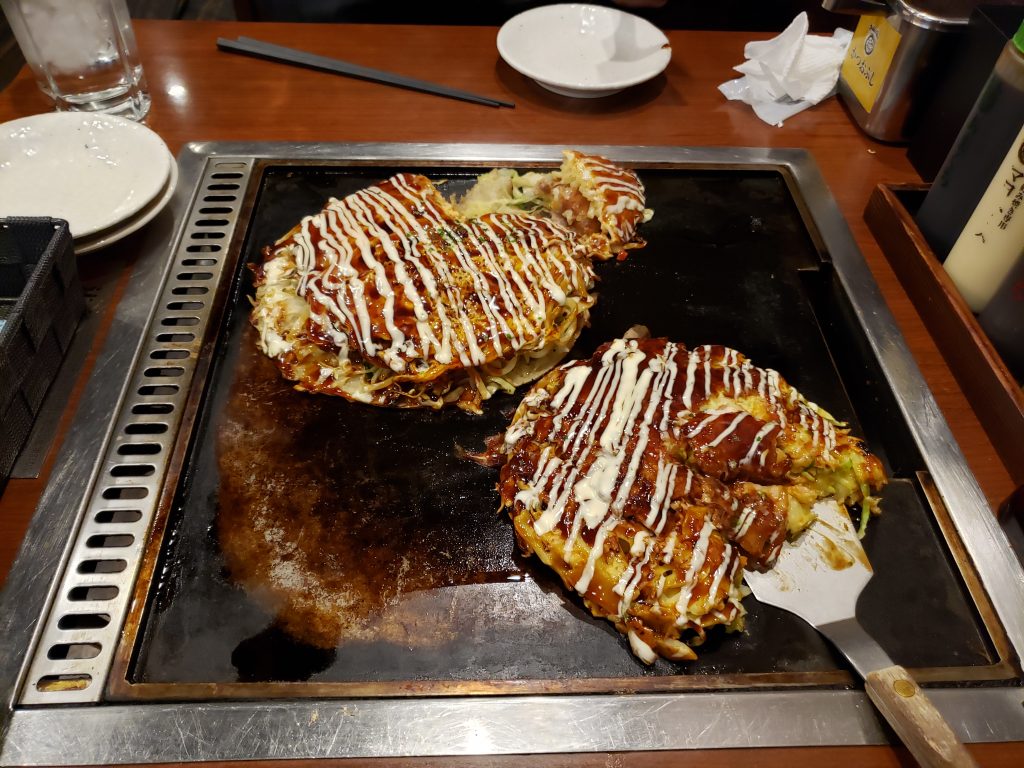 Basically the best thing ever.

I ordered two styles: Osaka style and Hiroshima style. One was made with soba noodles while the other was mostly cabbage-based. Oh my GOD these are so good. Top them with Kombu fish flakes and slather more of that sauce & Japanese mayonnaise and send yourself on a trip to flavor town. I LOOOOVE this stuff.