Just as we started to get over our jet lag, Abbie and I decided to ruin it by waking up at 4:30AM. Why? Onsen baths! Very early in the morning is the best time to visit the onsen since there is usually nobody there. Since it had snowed heavily the previous night, the outdoor volcanic hot-spring baths now featured gardens covered in beautiful crystalline pillows of ice. It was supremely beautiful and was a totally unexpected experience. Getting into the bath itself though was a little challenging, since it was still -2°C outside and because you needed to bathe yourself beforehand, you were soaked. It was hard not to just cannon ball into the onsen waters. Once you were in – ahhhhh… The heat of the water with the contrast of the arctic environment was wonderfully refreshing.

After that wonderful bath, I got all cleaned up at their shaving sinks, complete with lots of good smelling hair tonics and aftershaves. It was time to relax under the kotatsu and enjoy the snowy morning while we waited for breakfast.

The view from our room

After a seriously beautiful sunrise, it was time for breakfast.

Honestly, I love the breakfast more than the dinner. The flavors, while still exotic, are definitely easier for those adjusted on a western palette. Delicious crab miso, smoked egg, sausage, salmon, seasonal fruits, glass noodles, potato salad, seaweed salad, WONDERFUL yogurt, and lots of coffee. SOOO good. All the while, a snowy sunrise lit our tatami dining room. Wonderful.

Land of the Rising Sun

Of course we had to make a tiny snowman

After breakfast, Abbie and I slowly enjoyed the morning and just took it easy.

Once it was time to go, we simply crossed the street and waited for our bus.

All the snow melting away, turning the streets into rivers. Look at all of the water coming off the roof!

Going down via bus is often a lot easier than going up. It’s easier to pre-calculate your fare and have it ready for when you get off. Since we were going to the terminal stop, Odawara Station, our fare would be the maximum 1050 Yen. Easy! Both Abbie and I prepare exact change and hop on the bus.

The ride down was very pretty. Since all of the snow was melting, the waterfalls in the area were really spectacular.

A river and a rainbow

There was a little bit of traffic going down the road, but it was kind of nice since you got to take-in all of the little mountain towns. But, suddenly, the driver indicated that this final stop was “the end of the line.” Uhhhh… no it wasn’t. I checked my map, yep, definitely not supposed to be the end of the line. What? I guess the driver was just going out of service to end his shift. Either way though, we’re at the Hakone-Tozan station again when I just wanted to go directly to Odawara Station. These two stations connect to each other, of course, but now we had to buy tickets and wait for a train. Annoying. Further still, after pre-calculating our bus fare, we weren’t prepared to get off with our fares in-hand. Abbie didn’t understand this and dumped in 1050 Yen for an 800 Yen fare… oops. I had to hold up the line for just a little bit and count my Yen again. Oh well, let’s just get some train tickets.

Waiting for the train at Hakone-Tozan Station

Once we arrived, we needed to hop on the Hikari Shinkansen bound for Kyoto in 10 minutes. Hurry hurry! Made it!

This was going to be a two-and-a-half hour shinkansen ride down the coast of Japan. Visibility was excellent today, so there was a very good chance that we would see Mount. Fuji in all of its glory. Sure enough, 30 minutes later… waaaoooooohh… Incredible. It looked just like the all of the artwork. Massive, snowy, with a little cloud around it. We were on the left side of the train while Fuji was on the right. Not wanting to be rude and take photos over people, we decided to just take it in for ourselves. It was marvelous.

Image Source. If you could imagine us inside of the Shinkansen looking out, that’s kind of what it was like. (but more snow!)

I just love this train ride. Since we were on the Hikari line, this train rips passed many of the smaller stations and fully opens up, full speed-ahead for hundreds of miles. You get to see the coastal countryside of Japan zip by at over 320 KMH. Spectacular. After a long, uninterrupted train, we stopped briefly in Nagoya. I stayed in an apartment here last time. Nagoya is a pretty fun major city – definitely a bit more low-key and peaceful than Tokyo.

Nagoya from up on the Shinkansen tracks

A little while longer on the train and soon we arrived in Kyoto. Kyoto is nice since it’s a little more on the old-school side of things. Abbie and I hopped on a subway for half of the trek to the hotel, then decided to walk for the remaining two miles since it might be nice to take-in a little bit of the local color. The buildings here vary in architectural style greatly. One moment you’re walking through massive skyscrapers, the next you’re walking through a sea of residential buildings, most of which still feature traditional Japanese styles and materials.

A quick shot of Kyoto after we emerged from the subway.

Eventually, we made it to our hotel. Funnily enough, the hotel I stayed in last time I was here was right across the street. This was handy, because that meant that I was already familiar with this area. Once we were checked-in, we looked out the window and were greeted with one of the best hotel views (other than the ryokan) that I’ve ever seen. 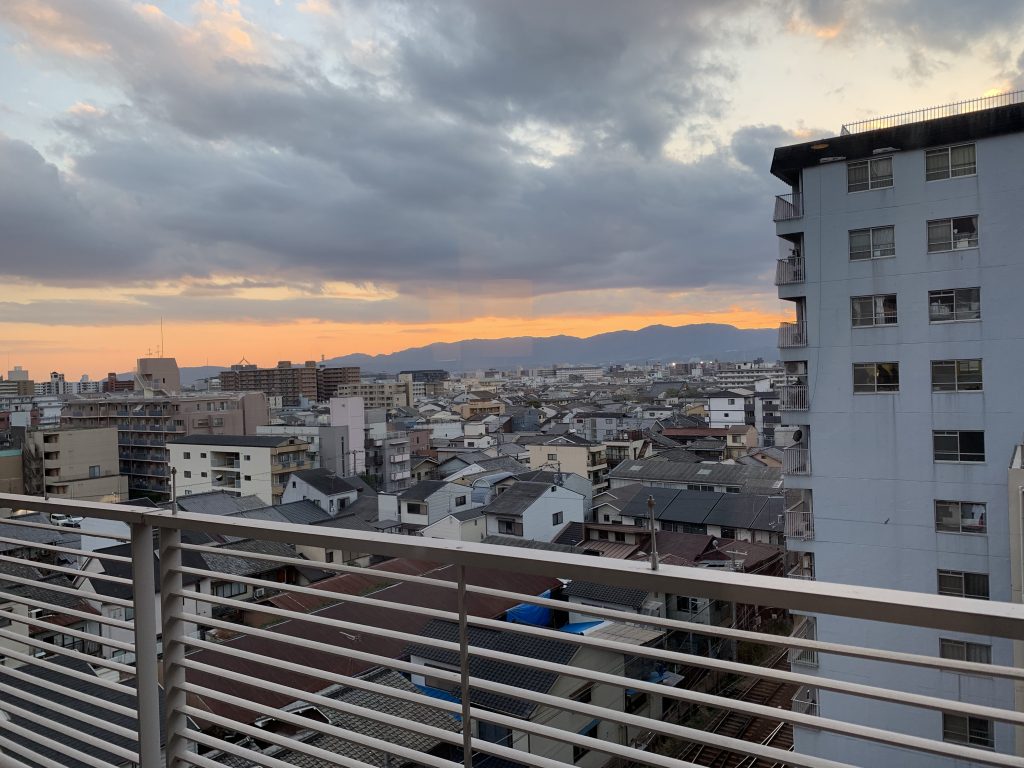 You could see right across the massive community of varied houses. There’s even a couple temples in the distance. Below us runs a little trolley track. Last time I was in Kyoto, my hotel view was just a brick wall and some AC units. This was great!

What was going to be for dinner though…? How about something fast, cheap, but more importantly, delicious. Gyudon. Hell yeah. Gyudon is a staple “fast-food” for Japan and it is oh-so-delicious. Basically, it’s chopped meat, usually pork or beef, served over rice. I like to crack raw-eggs into mine since the egg will cook into the hot rice and make it extra delicious. Cheap, yummy, fast, and filling. This is what fast-food should be like everywhere.

Both Abbie and I got full meals for about $9 together.

Last thing to do for the night was to do some laundry. While we waited, we decided to head over to the Daiso store down the street from us. Daiso is essentially Japan’s chain of “dollar” stores, where most items are 100 Yen each. Abbie picked out a couple souvenirs for her friends, about seven dollars’ worth of stuff, and paid with a 10,000 Yen note. The highest denomination. This is like going into a 99-cent store and paying with a $100 bill. The clerk gave Abbie an understandably surprised look, but happily accepted the bill (unlike the States where you’d probably be interrogated for using anything higher than $20). Abbie mostly wanted to break her large bill into smaller denominations anyways, so this was actually pretty handy.

After Daiso, we went to a little bakery stall to grab snacks for the morning and headed back for the hotel. Then, we collected Abbie’s clothes from the “dryer,” and relaxed for the rest of the evening.