Today, we were going to visit my favorite city in Japan: Osaka. Don’t get me wrong, Tokyo is cool, but Osaka is cool.

Not only is Osaka cool, it’s also delicious. Osaka has garnered the well-earned reputation of being known as “Japans-kitchen,” and I whole-heartedly agree. This city is a culinary wonderland home to some of the best food in the world.

…But first, we had to get there.

Osaka is very easy to get to from Kyoto – The two cities are only about thirty minutes apart and there are several train lines that go between the two. I simply punched-in where we wanted to go into Google maps, selected the route that preferred JR lines, and bam. Local trains leaving from Kyoto station that would take us directly to Osaka station. Easy.

After hopping on a few quick subways down towards Kyoto Station, we soon arrived and began looking at the time-tables for the fastest train to Osaka. This was also the first time Abbie got to see the immense glass roof at the front of Kyoto Station – it really is a sight to behold.

Photo Credit. Kyoto Station looks like this! In my haste, I didn’t grab a photo.

A quick (and crowded) standing-room only train ride later and we were in Osaka. This little local line is really great if you want to see a little bit of the semi-rural/industrial split between Osaka and Kyoto. It takes you over big rivers, gives you a view of Kobe from a distance, and even takes you through a bit of both cities. Once we arrived in Osaka, Abbie pointed out that every major station is essentially just a big shopping mall and yes, this is in-fact the truth. Nearly every major train station in Japan is its own metropolitan hub and Osaka was no exception. In front of us was a MASSIVE wall of shops and restaurants going up as far as the eye could see. Somewhere in that massive wall of shops is another Pokemon center… we’ll see if we can find it later. For now though, let’s find our next accommodation.

All we had to do was take the local Osaka loop to our destination station. Thankfully, this local loop is operated by JR, so we can finally use our rail passes again. Kyoto operates with many different private rail companies, meaning that it gets a little pricey to move yourself around even if you have a JR rail pass.

This little local loop is similar to the Yamanote line in Tokyo. Each train takes you all around the city. Since our stop was at the complete opposite end of the city, it gave us a chance to take in a few of the sights. I love Osaka – it’s got a certain charm that you can’t really find anywhere else. That perfect blend of old and new. It’s like Jazz Fusion (playing in the music video above), but in city-form.

Eventually, we arrived at our destination station (that sounds like a cool band name). It led straight into another shopping arcade. This time, it was a bit more “local.” Less crazy flashy shops, a bit narrower, a bit older. There was lots of local produce for sale as well as tons fresh-caught fish. This was more of a grocery arcade where local growers and farmers sold their goods. Everything looked so fresh. We had to drop off our bags before we did anything, though. They’re a real nuisance in the streets of Japan.

After a little bit of wandering around through the local neighborhoods, we found our destination. This time, it was going to be an AirBnB-type accommodation. Our own little apartment in the middle of Osaka for the next few days. Last time I visited Japan, I stayed in an apartment for just one night and it was AWESOME. Not only do you get way more room in general, but you get all the accommodations of a real home AND they’re usually far cheaper than hotel rooms. There is a bit of a risk when booking things like this though, as you never know if an AirBnB could cancel on you or not (plus there are no refunds once you are booked!), but if you play your cards right, it’s a real treat.

After faffing about for about 30 minutes trying to figure out what our door unlock code was (they never sent it to me, so I had to wait for them to reply to my request for it), we were finally in. Whoah. This place was awesome! So much space!

What did we decide to do during our first-night’s stay? Order pizza and do absolutely nothing. It sounds like a waste of a day, but this is the best part about traveling without any real schedule. Do whatever you want. Tired from all the traveling around? Take a day off to recharge. Why did we decide to go with pizza for our first meal within “the kitchen of Japan?” Well, think of it this way: Japan has some of the best food in the world. Taste is subjective, but let’s be real, Japan has objectively fantastic food. BUT. It’s all “Japanese food.” While this seems self-evident, let me explain: In America, we’re super spoiled for choice when it comes to flavor variety. The same diversity that gives us a unique blend of cultures and people also gives us near limitless choices for flavor. But here, nearly all food has that same Japanese taste profile. It’s wonderful, but it’s akin to going to the same restaurant every single day. Eventually, you crave something with a different texture and flavor profile. That’s what these pizzas were for. Something a little bread-y, salty, pizza-y to cleanse our palette to prepare for Osaka’s brilliant cooking. 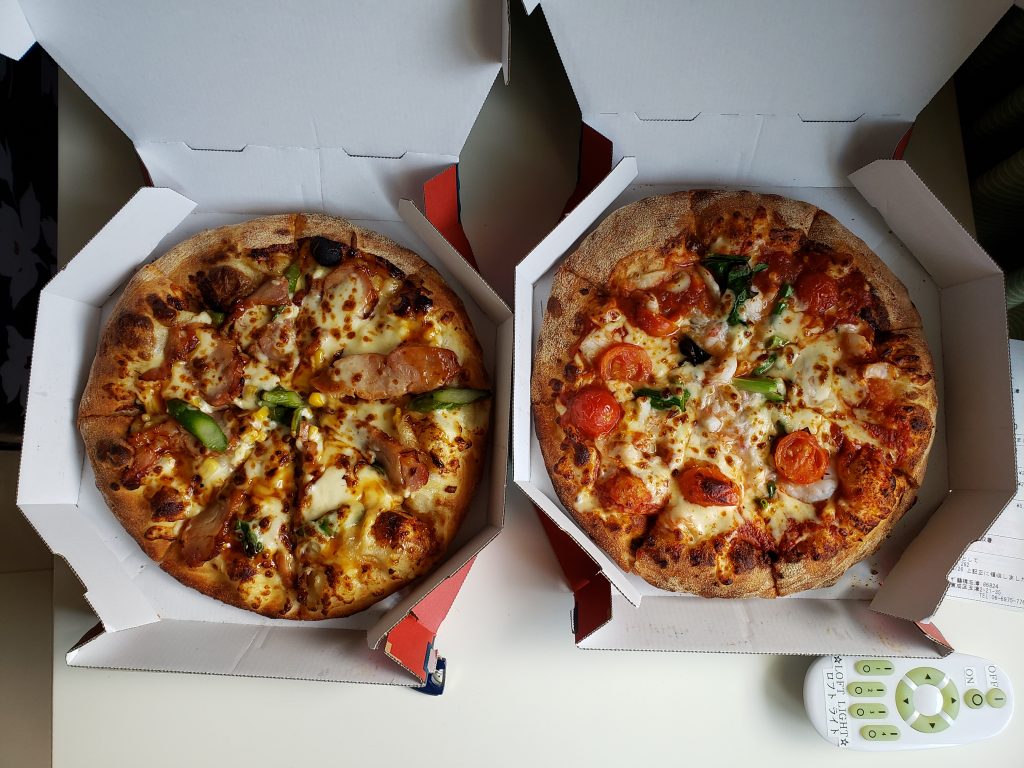 …And they were awesome, too.

These pizzas were so good. I love Japanese style pizza so much. One thing that caught me off-guard though: the price. Wow, these two tiny pizzas were $50, Jesus. That’s one of the most expensive meals we’ve had so far. Oh well, it’s worth it for the experience. Plus, delivery is “free” (baked into the price) and since there is no tipping here (YES. SO NICE), you don’t have to worry about that either.

After the pizzas, Abbie and I just sat around catching up on our overflowing YouTube subscriptions and just watched some TV. It was comfy. This apartment also finally featured some squishy beds. This was really awesome since all of our hotel beds so far have been the standard Japanese “board of plywood with a sheet over it” kind of deal. Nice. Let’s get some rest for tomorrow.