In Japan, it’s very common for beds to be extremely hard. And when I mean hard, I mean “basically a board of plywood with a sheet on top.” I awake early in my Takayama hotel with a stiff back and a mounting hunger. I heard that Takayama has a morning market where food vendors will sell all sorts of things along the streets. Hunting around for various breakfast foods sounded fun to me, so I got dressed and ready to go.

My checkout time was pretty early, 10:00. It was 9:40 right now, so I didn’t want to burden myself or others with my luggage. I went down to the front desk, checked-out, then requested to stow my bags. They happily obliged and I was on my way.

My morning walk through Takayama was definitely more peaceful than my previous walk during the evening last night. There wasn’t as many people around so you could actually see the buildings of the Old Town a little better. A mile or so of walking later and I was at the morning market.

There were all sorts of little things to try! My first stop was to a little old lady in a windowsill selling little rice-ball thingies on a stick for 80 Yen (~$0.60). I bought one, took a bite and oh my god this little thing is awesome. It was like a squishy rice dough with a smoky, savory, salty glaze. So simple, so delicious. 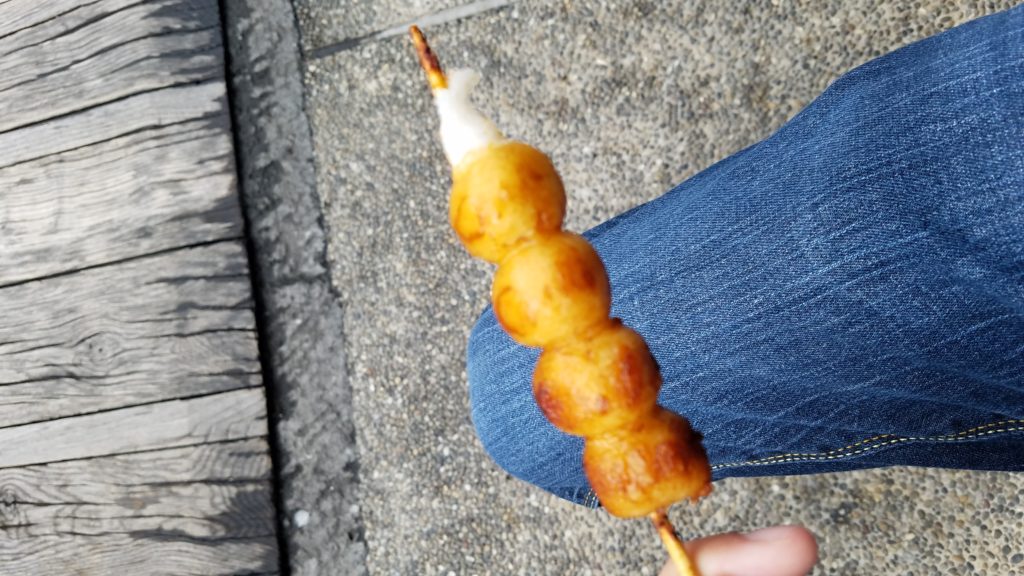 You’ll notice that a couple of these items already have bites taken out of them. I couldn’t help myself!

Next stop was a little stall selling meat-filled buns with little inscriptions burned onto them. They smelled really good so I picked one up. That same wonderful squishy rice dough makes another appearance, but this time, the bun is filled with beef, onions, and various other good stuff. So good! 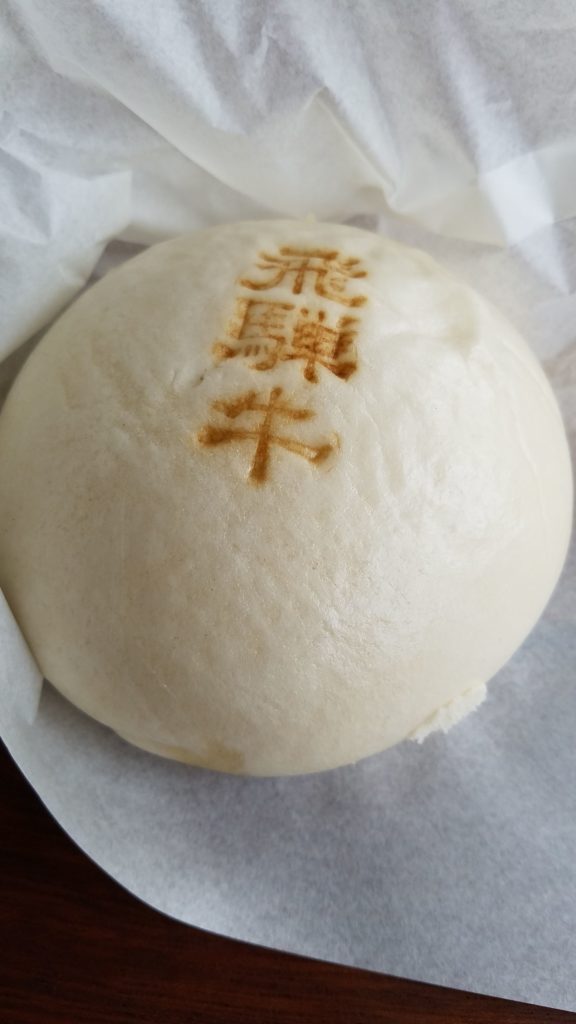 That squishy bun thingy was pretty filling for its size, so I wanted to hit up one last store and find something tasty there. I noticed that one particular shop had a line of customers out the door, so it must be good! After a little bit of waiting, they had a ticket machine much like the ramen shops. I chose a fresh pickle and a little fried hashbrown-esque thing. 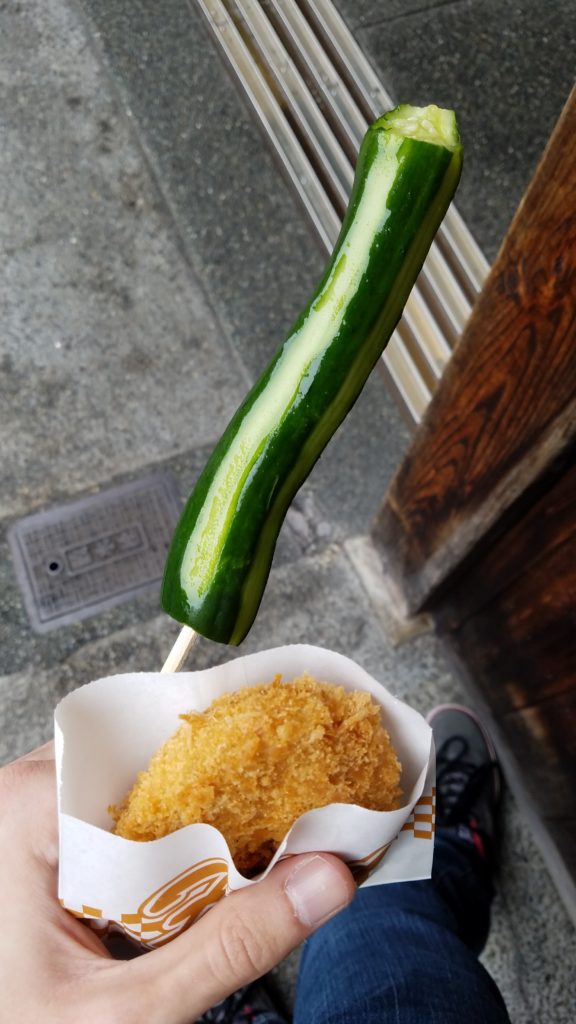 The pickle was super fresh and only lightly salted. Delicious. The little fried thing was a puck of what seemed to be a fried bean paste of some sort. It was salty, crispy, and lightly sweetened with a soft interior. Also delicious!

After my morning romp through the market, it was time to get ready for the scenic train ride down the mountain. I noticed that I was a bit early to the station, so I wondered if I could reserve a seat since there seemed to be tons of people wanting to get on the unreserved section. Turns out, you can reserve seats for trains day of, right until the train actually leaves. With a Japan Rail Pass, reservations are also free! I stopped into the office, requested a reserved seat, and within minutes, I was guaranteed a seat in the much less crowded cars. Neat, I should do that more often!

I decided not to take any photos of the decent down. I took lots of pictures on the way up, so the trip down was just going to be dedicated to me. The trip was just as lovely as before. Two and a half hours later, and I was back in Nagoya. I needed to rush off my train, run across the station, pass the gates, then run up the stairs onto the next Shinkansen within five minutes. Five minutes later, without any breath, there I sat on my next train with only moments to spare before departing.

This train ride rocketed me through the Nagoya area flat lands towards Kyoto where I will stay for several days. I still can’t get over how fun it is to ride on the Shinkansens. Here’s a video from my window seat. Wait until the end where you will see another train pass to really see how fast we’re going. Keep in mind that these trains are more-or-less 1100 feet long.

The rolling shutter effect was in full force for that video.

Within 40 minutes, I was in Kyoto station. Back to the Mega Cities. Kyoto is huge. I decided that instead of taking public transportation, I’d walk to my hotel much like the last few times. Walking through the cities I visit instead of jumping on the bus or subway allows me to scope out the area a little bit and even see some cool sights just by walking to my hotel. On my way, I passed by the Honganji Temples.  They were beautiful and huge! It reminded me of the Sushi Temple stage in Ape Escape.

A little bit more walking and all of a sudden, “Aidan!! Aidan, Aidan!!” Wait what the… who knows me here?? I turn and WHOAH it’s the Australian couple I met at the train station in Odawara! What a small world. We have a brief chat and had a laugh. I mentioned that I said “Sayonara, until we meet again.” And sure enough, we did. Weird how the world works sometimes. According to what they told me, their vacation has improved significantly ever since arriving to Kyoto, so that was nice to hear. “Sayonara, until we meet yet again” I say as we part ways.

Kyoto so far is big-normous and very upscale. I seem to be near some sort of large shopping district so the crowds are off the charts. These crowds paired with pretty skinny sidewalks makes walking around difficult, so once I finally found my hotel, I crashed for a little while after my 5 mile walk through the mob.

Dinner time! …but where to go? Kyoto Sushi! Damn it, it’s Monday. How about donburi, that was pretty good! Alright, let’s go! Oh, the shop is a five mile walk through the shopping district again. Welp, let’s go anyways.

After another long walk through fancy-land where all the people are well dressed and beautiful, I finally arrive at my location. I take a look at what they’re offering outside and… meh… It’s not really what I was looking for. The place next door to it though, what is that?? Beta Soba.

I walk into the restaurant and am quickly seated at my own table with its own little built-in teppan grill. Neat! I used the little ordering tablet next to me and picked out some beta soba and a bowl of rice.

A little while later and the meal is plopped down onto the grill in front of me. Whoah, this looks amazing. Egg, cabbage, and thin soba noodle flat cake filled with pork, shrimp, and other stuff. You even get a selection of delicious sauces to cover it with. IT WAS SO GOOD! Why did nobody tell me of this magical food before? Man, it was good! Crispy, salty, savory, umami to the MAX! 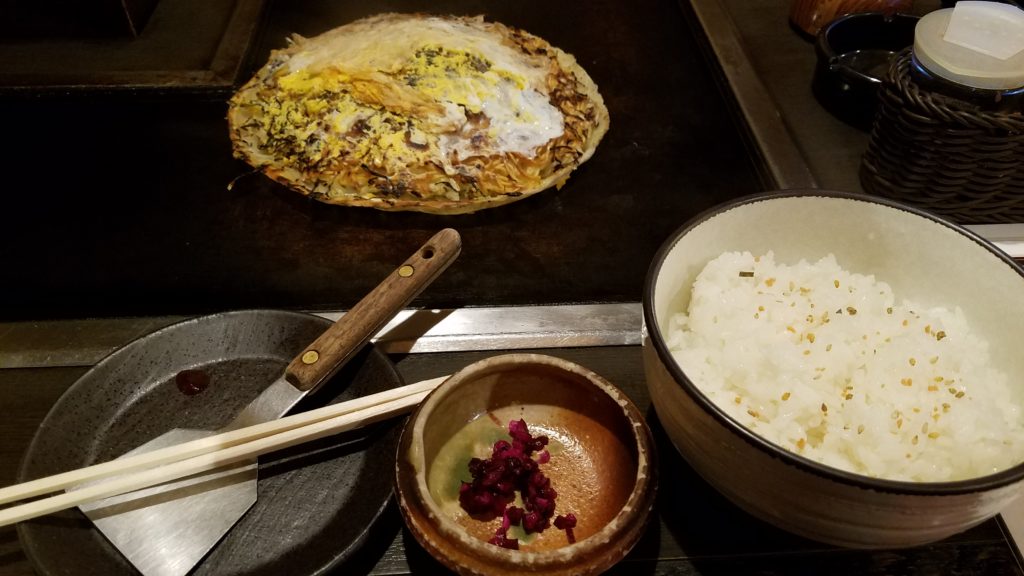 It was huge! I couldn’t finish the whole thing.

That was an eating experience that I must have again in the near future.

Now it was time to get back home. I don’t know if I want to walk another five miles through the madness yet again, especially after eating a meal like that, so I decided to give the subway a try.

Now the subways in Kyoto are not covered by my rail pass. Fortunately, the prices are very reasonable. Pay 150 yen to be teleported to my hotel? Hell yeah! Only one problem, I don’t have an IC card, nor do I know where I can get one… and the ticket machines are all in Kanji. Err…

After a long bit of looking, I find my final destination and walk up to the machine. It was cryptic and confusing, so I asked the person beside me for help. They happily obliged and soon I had my ticket. The Japanese are so helpful and friendly. On the ticket machine, not only did you have to pick your final destination, you had to find that destination on the chart above you and calculate your total fare… which makes no sense to me, just calculate it based on the city automatically… oh well, I got my ticket. I really need to find a place to get an IC card.

I pass my tickets through the gates and within moments I was at the subway station just a few steps away from my hotel. These trains are magic.