Dammit. I suppose it could be worse – I could be boarding a plane for a 12 hour flight across the Pacific feeling like this. At least I have one day left that I can unfortunately sacrifice to sleep in bed all day.

No, I wasn’t going to waste the entire day. I had to do something new. I pushed through my symptoms, took a few ibuprofen, and drank some coffee. Soon, I was actually feeling pretty good. Almost to the point where I thought my symptoms were just allergy related. Alright, let’s get out and go down to Harijuku today.

Harijuku is more of a “young person” hotspot, but I truthfully found it to be more of an odd tourist trap. More specifically, Takeshita street. It was a huge strip of stores with every clothing item you could think of, giant rainbow cotton candies, scones, fancy waffles, and I even saw an owl handler. Kind of a neat place, but it really feels more geared towards teenage girls in my opinion. Upon arrival, I was starving. It was just around 11:00 and I still haven’t had breakfast yet, so I popped into one of those fancy waffle cafes. I ordered a cup of “American” coffee… which is just.. uh.. coffee, and began to look through the menu. Man, these waffles were expensive. I must admit, they all looked beautiful, but $12 for two waffles? Get outta’ here. Since I haven’t really had any fresh fruit while I’ve been in Japan, I decide to go with the super fruit waffles.

Gorgeous and delicious, but that was basically a desert, not breakfast. Waffles with bananas, kiwi, strawberries, blueberries, whipped creme, and a chocolate glaze. AKA All of the sugar. Also, have you ever seen a “waffle fork” before?

All-in-all, that was a pretty good meal. Little too expensive for what you get though, but if you dig pretty food, that’s the place for you.

Alright, time to wander a little. Sadly, I don’t have too many photos since it was insanely crowded and I had to bail out a little early. 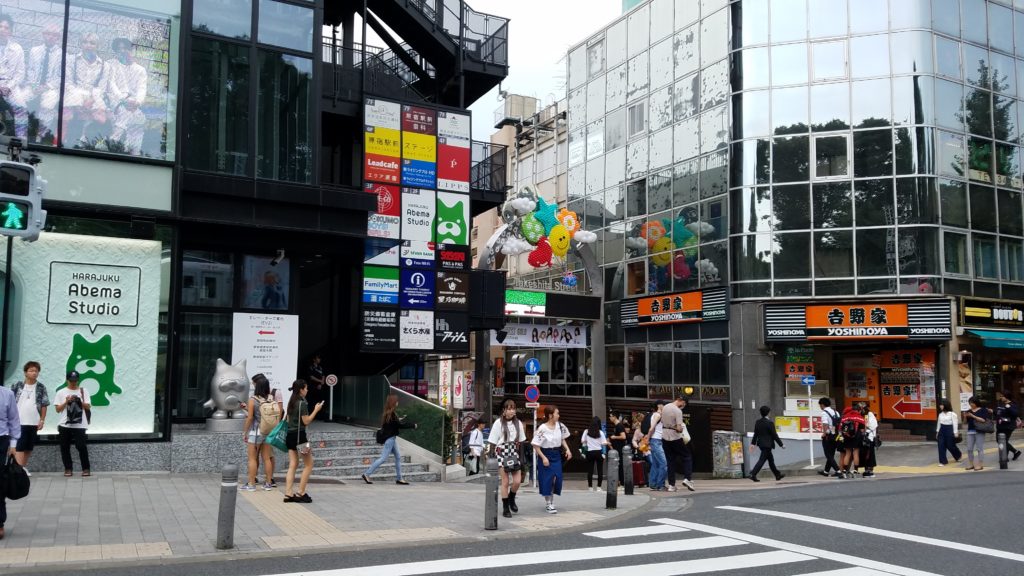 You will often see edgy avant garde art and billboards all over the place. This is one of the few places in Japan with heavy amounts of graffiti, though I’m unsure if that was just an aesthetic choice or actually caused by malicious teenagers.

Now one thing that I want to talk about that I found very weird and might be difficult to tastefully explain was the presence of black street barkers. I say these next words with no intent to offend, just simply my observations. In Japan, it is VERY, VERY rare to see a person of color. I think I only saw one on my entire trip up until this point.  It seems that all the “cool” shops down here hired a bunch of black men simply because they’re different and stand out against all of the other street barkers. I’m not quite sure how I felt about this to be honest as it seemed a little exploitative? If they genuinely enjoy their jobs then more power to them as it’s difficult for outsiders from any background to get jobs in Japan. Another thing that I heard about Japan was that it was common to be yanked from a crowd towards a store – this had never happened to me until now when I was tugged over by one of the barkers. Yeah, no thanks… I wanted to get out of there.

I was mainly here for the big 100 Yen shop near the mouth of Takeshita street. In this store were countless items over several floors that were all priced for 100 Yen a pop. Think dollar store, but the items inside are almost all made in Japan and are very high quality. I wanted to pick up some gifts here while I still had some strength left. Soon after leaving the store, I could really feel the body aches creeping back and my head began to hurt. A 30 minute ride back on the Yamanote line and I was at my hotel. Crash. I was out for the rest of the day. Such a bummer, but again, at least I had a place to crash after feeling like that.

Eventually, after about 8 hours of sleep, it was really dark outside, but I was pretty hungry. As much as I wanted to have another nice dinner in Japan, I just didn’t have the strength for it. I settled for a convenience store meal which actually was pretty good. This was kind of a sad way to end the trip, but truthfully, I’ve done just about everything I wanted to do in my stay here. I am completely satisfied with my trip. I’ve experienced so much from this trip and other than becoming sick at the very end, everything just went perfectly to plan. This journey was awesome.

And… If I’m going to be sick in Japan, you know I’m gonna’ try out the silly little head cooling thingies.

They’re weird. One side has some non-adhesive stickiness that you just slap on your forehead. The idea is that the little gel pack will diffuse heat from your head, and at first, it really worked well! Then after about 5 minutes, it became the same temperature as my head. Even glorious Japan can not beat the laws of thermodynamics.

As I write this story, I’m still feeling a little meh, but this time, I have a 12 hour flight to catch. We’ll see how my final hours in Japan go.

Alright, back to bed.