I have safely made it back home to California. Sadly, I arrived horribly sick after an agonizing flight home. A sad way to end such an incredible trip, yes, but I do have one more fun story to tell about my last few hours in Japan.

After packing up all my goodies and clothes destined for home, I checked out of my final hotel and requested to use their printer for my boarding pass. Soon, I was out onto the streets of Tokyo for the final time. I was already feeling pretty worn down from the onset of symptoms from my illness, so I needed to kill a couple hours in relative peace. It was a beautiful day and lots of shops were open and selling wonderful looking foods for lunch time. No wonderful foods today sadly, my stomach was simply too opposed to the idea of eating. I walked a bit up past a couple stations and noticed that there was a park atop a hill near Nishi-Nippori Station. I figured I could find a bench there and simply enjoy the weather for a couple hours before hopping on a train at the local station and heading to Tokyo Station for the NEX.

My trusty bottle of water. First thing I ever bought from a vending machine here and has been with me, refilled, for this entire journey. Bye bye! :(

After climbing a very steep hill (terrible when you’re sick and hauling tons of stuff!), I found a little quiet park with children playing in the distance and a small path leading from the entrance. Down that small path were a couple of empty benches under some trees. Perfect. I arrived at the benches and watched as the pigeons wandered towards me cautiously in hopes of me having bread. Sorry little guys, not today.

I sat there for quite a while alone until suddenly, an old man on a red bicycle arrived with a little bag of random items stowed away in the front basket. He parked his bike a reasonable distance from me and pulled out a little bag of something. He began to walk towards the fence of the park near a large tree and dump the contents of this bag on a small stone pedestal. Almost immediately, four stray cats appeared out of nowhere and quickly moved towards to the food that the man had placed down. Whoah!

The old man slowly hobbles over to the bench off to my left and takes a seat. He unwraps and slowly eats a jelly pastry as the pigeons soon gather in anticipation for their offerings too. Sorry fella’s, this old man just wants to enjoy his treat and watch. Both him and I watch the birds. After a while of silence, both him and I notice that one small black cat was stalking the pigeons and was poking it’s face out from the tree it was hiding from. The cat was unsuccessful at catching the birds of course, but the man and I both had a good laugh. Soon, the old man attempts to make casual conversation to me joking about the birds and cats. I could only respond in short phrases and charades, but I think he understood. Further still we watched, when suddenly, giant black ravens also decided to join the mix.

The old man hobbled back to his bike, fed the cats more food, then poured the remainder out on the ground for the birds. The four black ravens got every single scrap while the hordes of pigeons could only watch. Any pigeon that tried to take any food was quickly chased off by a raven. A little sad? Yeah, but the old man and I watched as all three of these creatures interacted and we had a good time. Nothing but a couple birds getting puffy with one another and a few cats unsuccessfully catching anything. It was fun to watch, but the most notable thing was the old man’s behavior towards me. If you’re an outsider living in Tokyo, it’s not very likely that you’ll find someone that’s willing to initiate conversation with you unless you’re in obvious need of help. The fact that he was enjoying his time watching the birds and cracking jokes with me just like I was “any other person” was really great and humanizing. It was fun to have a little friend to watch the world go by with for a couple hours. 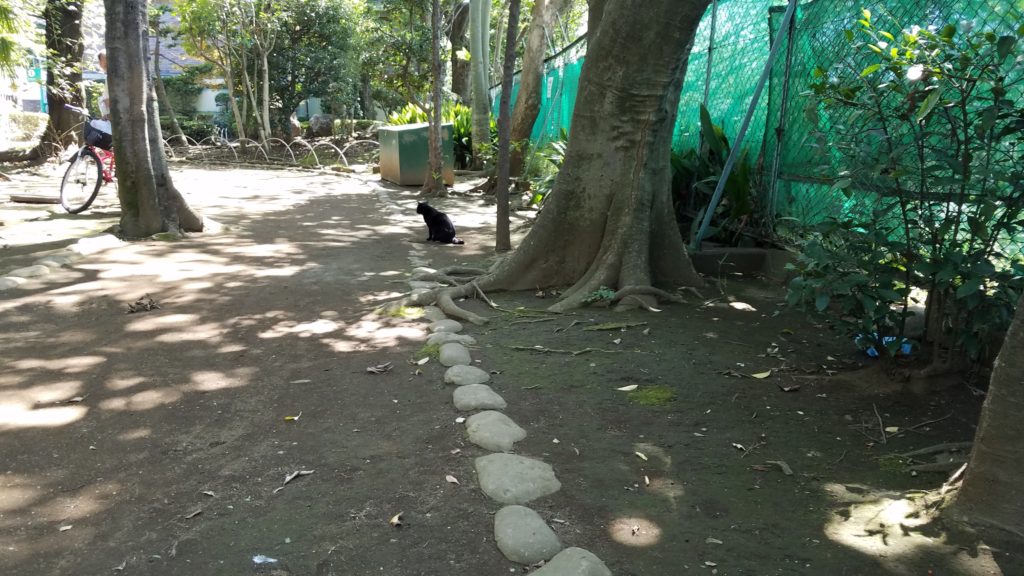 The man walks to his bike to grab food for the cats.

They were big cats too! Another black cat hides behind the tree atop the concrete pedestal the man used to feed the cats.

12:20 rolled around and it was time to say my goodbyes. I grab all of my stuff and gesture a wave. A smile, laugh, and a wave was returned by the old man and I walked on towards the train station at the bottom of the hill. That was pleasant.

I jumped onto the Yamanote line for the final time and zipped off towards Tokyo Station.  Okachimachi.. Akihabara.. Kanda.. Tokyo Station. Alright, this is it, time to board the NEX back to Narita. I followed the signs towards the big red train and eventually ended up in a funny spot. I remember coming up these stairs fresh off the plane thinking to myself “Remember this area to get back.” That seems like ages ago. That’s when I had no idea what I would be in for. Soon I’ll walk up these stairs again, but for now, down we go towards the platform.

I await my final train journey at the basement of Tokyo Station. Moments later, the same white-black-and-red train that brought me to Tokyo has arrived to take me away. It was a little sad, but I was ready to see my family again. Soon we’re off and I took the entire ride to just enjoy the window-seat view and watch Tokyo go by. 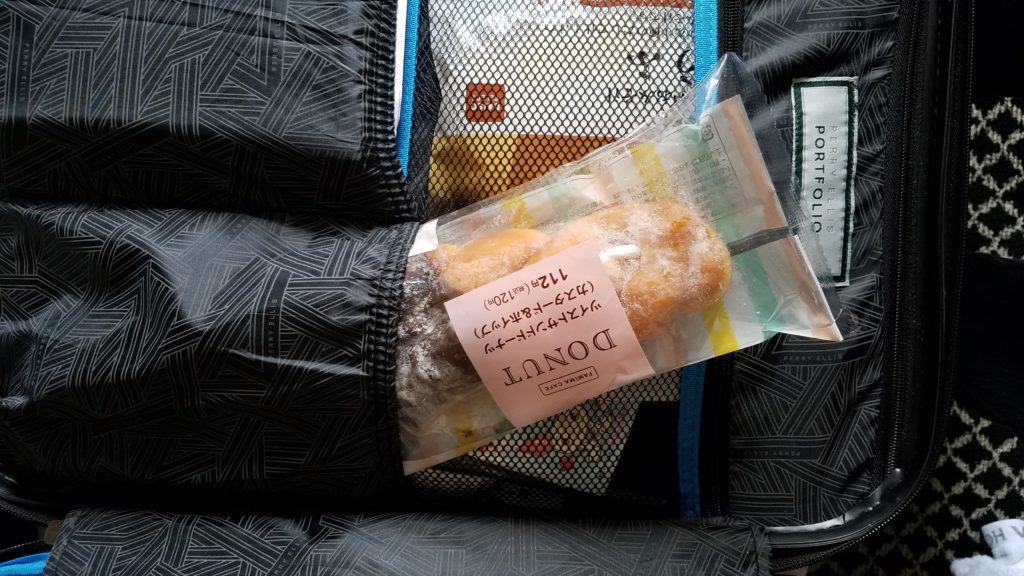 It didn’t take long until we arrived at Narita Airport. I followed the signs to the main lobby and passed through security and customs. Security in Japan is SO much nicer than it is in America. The staff are friendly and helpful and even though you still have to go through a metal detector and scan your stuff, it was way faster and more efficient (no “take your shoes off” bullshit). After security, I visited the customs booth, surrendered my passport, and… STAMP… welp there it is, trip is officially over. Aww. 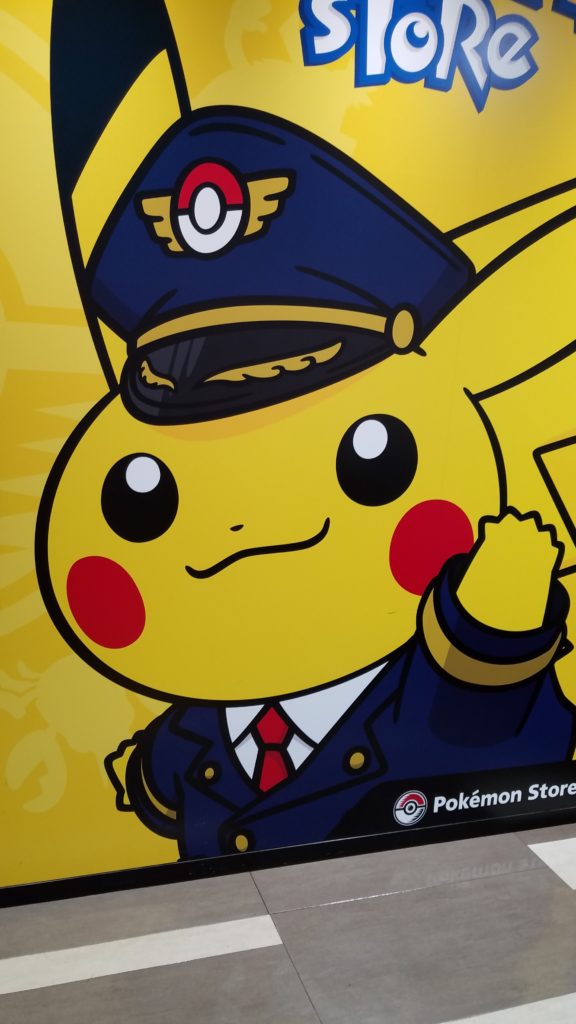 Bye bye Captain Pikachu. I liked spending too much money at your stores.

I waited a few more hours in the airport and watched the JAL workers meticulous work to maintain and prepare our airplane from the giant terminal window. By the time we were boarding, I was actually feeling pretty good and only thought my illness symptoms were just mere allergy symptoms. Sadly, this was very much not the case as I become unbelievably sick after a couple hours in the air, but before that, I had one last nice send-off from Japan. 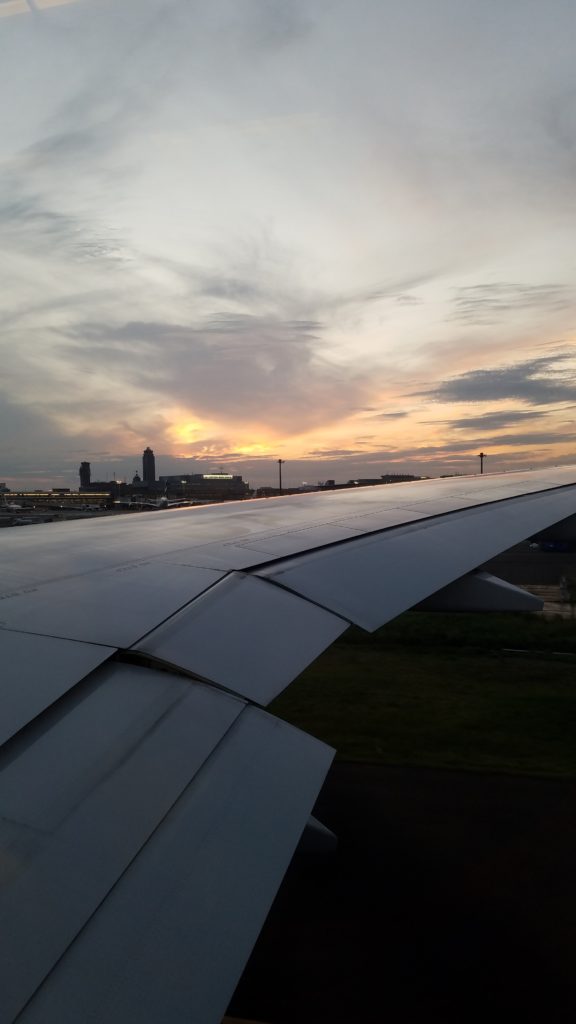 A spectacular sunset with big Japanese clouds. A great visual to end on.

My time in Japan has been life changing. I encourage everybody to visit as it truly is a wonder world of unbelievable food, transportation, services, and most of all friendly people. Japan is very proud of their country and I believe they have every right to be. It was the time of my life and I will be coming back.

For the entire nation of Japan: