After a comfortable night of rest and relaxation, I awoke with no specific plan in mind for the day. I thought to myself, “I’ve seen lots of central Tokyo, what’s to the west?” I’ve heard that Shinjuku is neat – that’s where all the sky scrapers are. Alright, that sounds fun, let’s take a trip down to Shinjuku and see what we can find!

Shinjuku Station was only a short 30 minute ride away on the Yamanote line. Soon, I arrive and emerge from the underground pathways.

Here’s the first thing I saw at Shinjuku

Shinjuku is just like the rest of Tokyo, but more… mega. There are tons and tons of enormous buildings everywhere. The weather outside was perfect which was really nice after all the rainy days I had in Osaka.

I began my walk around town and wandered for a couple miles. I always like to stray off from the main paths and see some of the less crowded “suburb” areas. It was a lovely walk, but I still didn’t really have a goal in mind. I eventually came across a city map on the side of the street. Highlighted on that map was the Tokyo Metropolitan Government Building. Oh yeah, I’ve heard of that! You can go all the way up to the top observatory for free and take a look at Tokyo from the sky! Alright, let’s go there!

A bit of walking later, and in the midst of all the other massive sky scrapers, there it stood.

The Tokyo Metropolitan Building from the ground.

Whoah, this building is huge. All around the building flew banners promoting the 2020 Tokyo Olympics. As awesome as that sounds, I can’t imagine what Tokyo would be like if it was even more crowded. Soon, I found myself in the massive main courtyard and followed the signs to the observatory elevators. 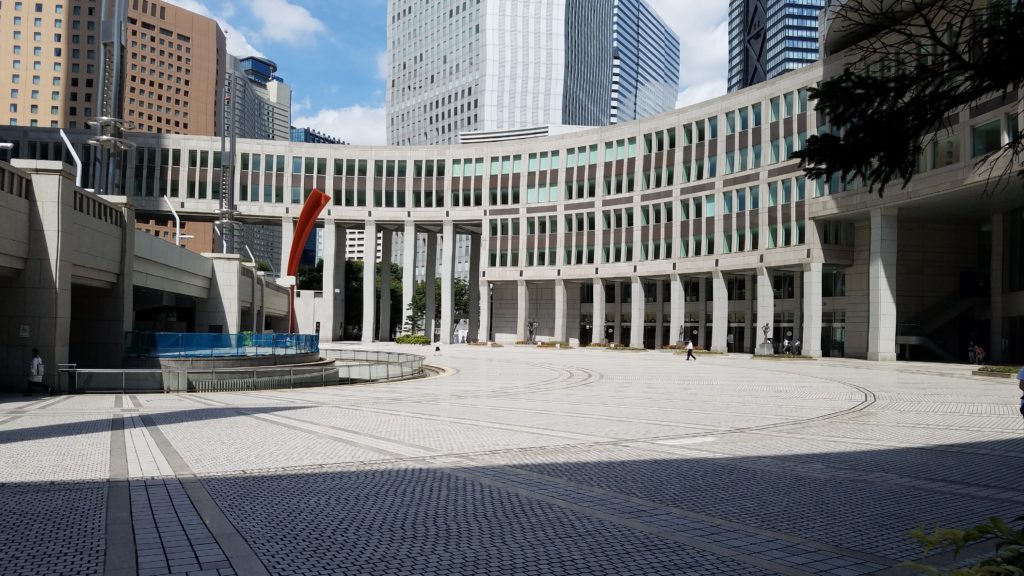 Towers from the courtyard

There was a very short line near the elevators along with a couple police officers. Reasonably so, they were there to give your bags a quick search, and after about 10 minutes or so, I was boarded into a very crowded elevator. It’s funny, that elevator was filled to maximum capacity, and yet, the entire way up, dead-silence. Crowded as all get out, but not even a peep from anybody. It was odd.

45 Stories and some ear-popping later, I was at the top. There were several huge windows to see Tokyo from nearly every angle, a large gift shop, a restaurant with a nice view and classy music playing, and a huge line wrapping all throughout the top floor just to take the elevator back down. The elevator line up the tower mislead me to think that this place wasn’t going to be that crowded. Oh well, let’s see Tokyo from the sky.

The photo doesn’t really capture the true feeling of seeing an “infinite city.”

Seen in the skyline: The Tokyo Skytree. Very faintly on the right side, Tokyo Tower (see: Eiffel Tower) is visible. On a clear day, Mount. Fuji would be visible too. You can click any of these images to see the full resolution.

You couldn’t even explore 1% of this city within a lifetime.

A garden and fountain down below. People look so tiny! 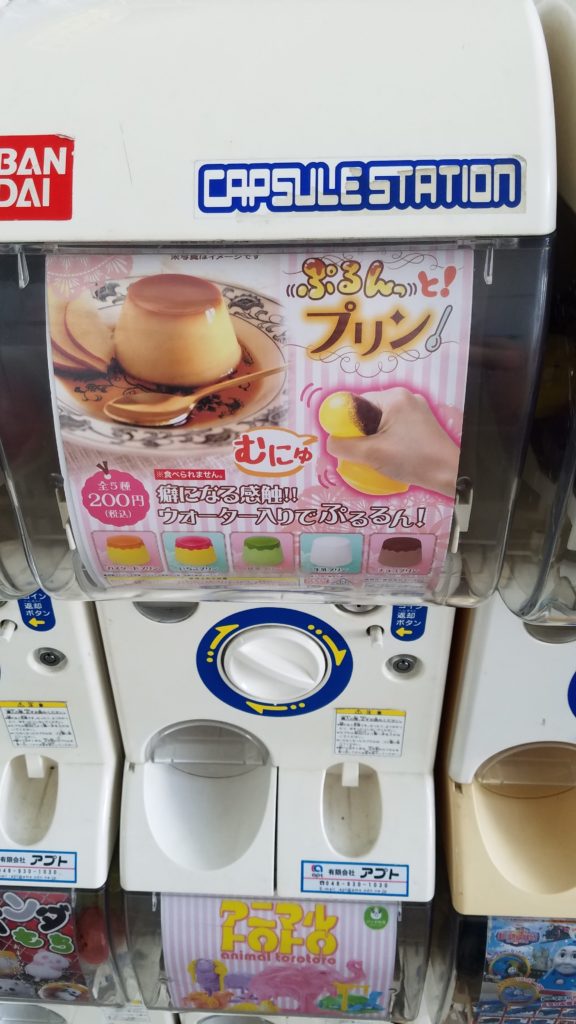 I’ll just settle for a squishy flan from a Gotchapon so I can give it to my sister. “プリン” (Pu-rin / pudding) says the gotchapon.

Alright, I’ve taken it all in. Time to wait in line for the elevator down. This took about 20 minutes, but soon after yet another odd and completely silent elevator ride down 45 stories, I arrived back into the lobby of the Tokyo Metropolitan Building. That was fun! And best of all (sans squishy flan) it was free! If you’re in Shinjuku, you absolutely have to take advantage of the free observatory decks of the Tokyo Metro. I’ve heard that the Skytree also has a good view, but required a HUGE wait in line and costs around ~$20-30. Though, the Skytree is over 600 meters tall while the Tokyo Metro is just over 200 meters.

Alright, I’m hungry. I want some ramen. It didn’t take long before I was at a corner shop serving up big bowls of spicy pork ramen. That sounds awesome, I’m in. I walk up the stairs, order up the biggest bowl with all the toppings, and soon enough: 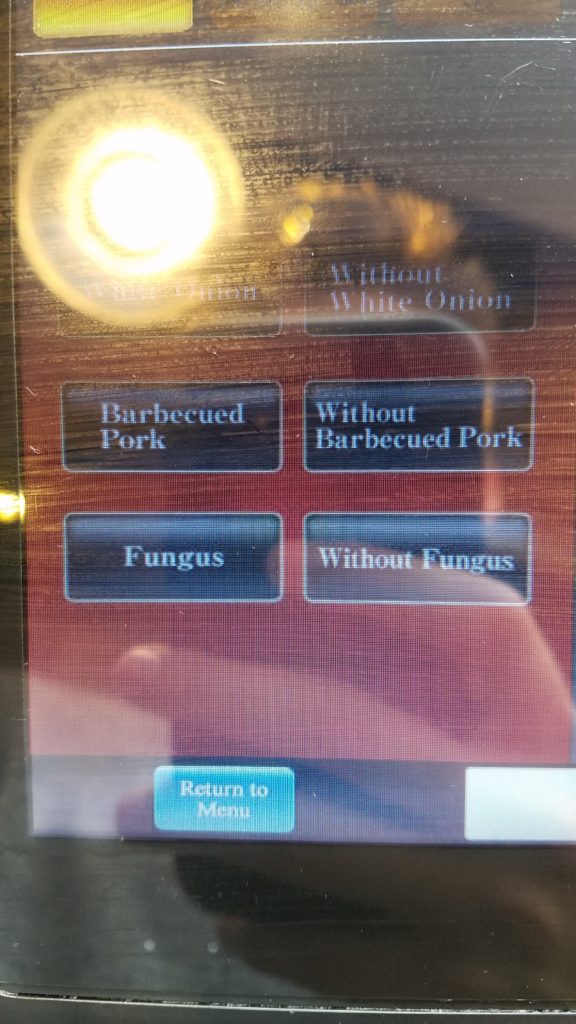 The noodles this time were thin this time! It was almost like angel hair ramen. The broth was deliciously rich with porky-goodness and the special red paste spiced it up. It was a subtle spice that built up with time, and soon, my nose was running. Looks like that’s pretty common, since instead of napkins, there was a box of facial tissues. Ha.

View from the restaurant window. As a fan of retro Sega hardware hacking, it warms my heart to see Sega arcades on every corner.

After lunch, I did a bit more walking. I just love the energy of Tokyo so much. Don’t get me wrong, I loved the other cities that I visited on my trip too, but something about Tokyo really speaks to me. A highly ordered and meticulous society meets absolute chaos. I just didn’t get that sense from any other city. The only other city close to the feeling of Tokyo in my opinion was Osaka, but sadly, I got rained out of most of my stay there.

Eventually, I hopped back on the Yamanote line to get back to my hotel. I didn’t really think about it until I was already back at the hotel, but… I just hopped onto the correct train, on the correct route, and got off at the correct station, all without looking anything up on my phone. Man, I was just getting really good at daily life in Japan and the trip is almost over. I’ll be an expert for my next visit ;)

I needed to wash up my clothes for the next couple of days, so I headed down to the hotel’s laundromat and tossed in my clothes. Same crappy driers as every other hotel… You know what? I’ma keep my 200 yen and just air dry these things. Once my clothes were cleaned, I took them back to my room and found every hangable surface I could find. Only one problem: I was getting pretty hungry after all of this and I only had one set of dirty clothes. I didn’t really want to go anywhere fancy looking like a chump, so I figured I’d see how the Japanese take on an American Hamburger.

MOS burger is a very popular Japanese burger chain that uses odd pork and beef mixed patties. Up until now, I haven’t tried them yet, but from what I hear, MOS makes a pretty good burger. There was a store right down the street. Alright, I’ll give MOS burger a try, but my standard here will be In-n-Out… let’s see how Japan stacks up.

I walk in, order a double teriyaki burger and a large fry. I’m soon given a number and I head up to the auxiliary seating up a short flight of stairs. After a few moments, a friendly staff member delivers my food, and man did it smell good. Perhaps the stereotype of Americans loving burgers is true; after all, I’ve been deprived of a good ‘burger and fries’ for almost a month now. The portion sizes were definitely scaled back a bit which is nice: Their large is more like our medium or small.

The burger was pretty good! Does it beat In-n-Out? NOOOOO not even in the same ball park, but it was still pretty good nonetheless. There was a sticky, savory teriyaki glaze atop two pork and beef patties. No cheese, instead, there was Japanese Mayo and ALL OF THE LETTUCE IN THE UNIVERSE. Real talk Japan, tone it down with the salad. What I really enjoyed were the french fries. Just like home – thick cut and delicious.

As I sit there eating my burger and fries, The Beach Boys were playing. I assume this was just a cute attempt to give the restaurant an authentic “American” feeling, but truthfully, it kinda’ worked on me. Surf City came on, and it made me think of Home. I love you Japan, but you know, I think I’m ready to go back to California. This was the perfect amount of time for me.

You know we’re goin’ to Surf City, gonna have some fun