I can’t believe the first leg of my trip is already over. The trip feels like its flying by so fast, but I really want it to last forever. It was time to leave Kanda and board the Shinkansen bullet train towards Yokohama. I packed up all of my clothes and belongings, had a simple breakfast consisting of melon bread (Amazing, by the way) and a little tray of breakfast goods, and even had a little free time to call my friend Skyler to attempt to play Super Smash Brothers over a woefully high-latency connection. Fun, but it didn’t really work out.

Soon, the clock struck 11:00, and it was time to check-out of my very first home in Japan. Sad, but at the same time, exciting because now I get to see what else is in store. Now even though I felt confident with the local train systems, the Shinkansens operate slightly differently. They’re ran in a similar fashion, as in, you just show your rail pass to the attendants and wait for your train, but each train goes somewhere completely different. You must follow the signs towards your route, train number, and final city. Google Maps as always is a godsend in situations like this. It didn’t take long before I found a sign with the hiragana characters “のぞみ” (Nozomi) and my route number. That was it!

As I climb the stairs toward the station platform, I notice that things are a bit bigger on the Shinkansen tracks. The queues are clearly laid out on the floor, there are shops to buy bento boxes for long trips, and there are much more staff bustling around. Just then, a N700 series Shinkansen arrives to the station platform – whoah, these things are enormous. I walk down to the unreserved seat section and wait for my train. On the sides of the trains near the doors are little electronic signs that show the route number and line information in Kanji, Hiragana, and English. Helpful, but this isn’t my train. My train arrives in thirty minutes or so.

I wait the first train out and watch as it departs. I found it interesting that even though the train was leaving the crowded station at about 60 miles per hour, the engineers inside of the train were sticking their heads and most of their bodies outside of the train to ensure that everything was all clear. As I wait for my train, I notice that a league of women in head-to-toe pink uniforms begin to line up near me on the station platform. As soon as my train arrived, they stepped on, closed the doors, and began rapidly cleaning the trains. They slammed the seats forward, changed head rests, and cleaned the seats with remarkable speed. Very impressive! Soon, the train doors opened and it was time to board. I’ve heard rumors that getting a seat in the unreserved section of the Shinkansen can be a nightmare – in my case, this was false, as there was ample seating. I suppose it helps that I’m not traveling during peak time.

A few moments later and we were off. The seats on the train were so roomy! I’d kill to have seats like this on my plane trip home. My journey today was actually pretty short in comparison to the ones I will take later in the trip, but it was cool nonetheless to get a little practice with the Shinkansen process. Soon, the train accelerated rapidly, and Tokyo was whizzing by at an extreme speed. Building after building, street after street, zooming by effortlessly. I loved when the train would pass along reflective buildings so I could look out the big windows and see myself within the reflection. I really like the Shinkansen and desperately wished the US, or even just California had a rail system like this. It truly is remarkable and is something the people of Japan should be very proud of.

Two blinks of an eye later and I arrived at Shin-Yokohama station. I’m not quite sure what I expected from Yokohama, but it felt much more “metropolitan” than Tokyo. Sure, it was still a mega-city in Japan, but it felt a little more oldschool and higher-class. I booked my nights here quite a while ago, and I remember getting a fairly good deal on them since I was so early. As soon as I walked out of the train station, I looked to my right and… whoooah… that’s my hotel?

My hotel is the cylindrical tower behind the blue sign.

A little walking in the light, drizzly weather later, and I was inside of what looked like a very ornate shopping center. Turns out, this hotel has a very upscale mall attached to it complete with neat restaurants and stores! I walked to the check-in counter, and since I was a bit too early, they allowed me to check-in my bags and return at 14:00. It was about 12:00 at the time and I was pretty hungry. This was a good time to hit the streets and see what there was to eat. Yokohama’s atmosphere is interesting to me. It’s like Tokyo, but older. The crossing lights are no longer futuristic-looking LED signs, instead, they’re incandescent backlit plastic. Buildings are less dense, but certainly just as tall. It was like a sleepy version of Tokyo. A short bit of wandering later, I stumble upon a restaurant that had some pretty appealing looking lunch specials. I walk in and am directed to the top section where I was helped by a friendly server who graciously attempted to translate the Kanji lunch menu for me. It was a little hard to understand, but we managed to work it out!

I ordered a tuna special. It included a bowl of ground-tuna & nori, rice, miso soup, and a whole bunch of delicious little toppings. I assume the idea was to kind of “build-your-own-sushi.” Well, at least I hope it was, because that’s what I did anyways. It was delicious, filling, and very affordable (870 yen, or about ~$7).

After lunch and a bit more waiting, it was time to check-in to my room. I walk to the elevator lobby and am stunned at how gorgeous everything is. I also found one of the most Japanese things ever – amidst all of this ornate and beautiful architecture lies a 7/11. Talk about juxtaposition.

Hilarious!  Now it was time to get to my room on the 19th floor. I’ve never gone so high up on an elevator to the point where my ears pop before. I get to my room, open the door, and DAMN! This room is huge compared to my last one. I really didn’t expect that this hotel was going to be baller status. On the far end of my room lies a huge panoramic window that shows off downtown Shin-Yokohama. Man, this was so cool.

At that time, and still as I write this, Yokohama is experiencing some light rain. I remember talking to my sister before this trip that I really wanted to have just one day where it was raining outside and I just get to laze around. Is it as exciting to write about? No. Was the prospect of being ultra comfy exciting to me? Hell yeah. So that’s just what I did. I stayed in my hotel and just took it all in. I read the books I bought, caught up on my subscriptions on YouTube, and just stared out my big window. I had a room downtown with a bed and a big TV. That was the way to go. 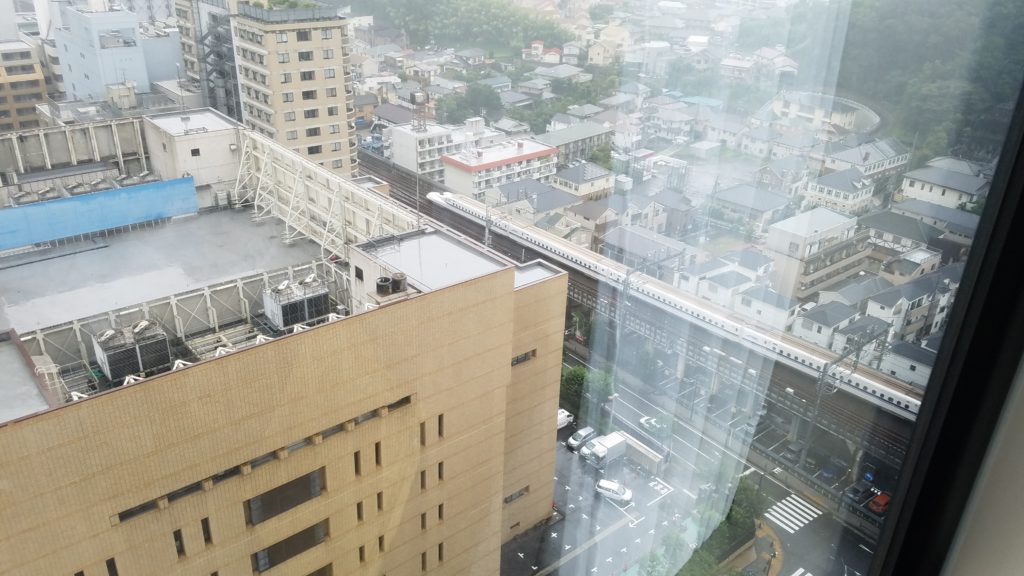 Look! I can see and hear the Shinkansen go by! 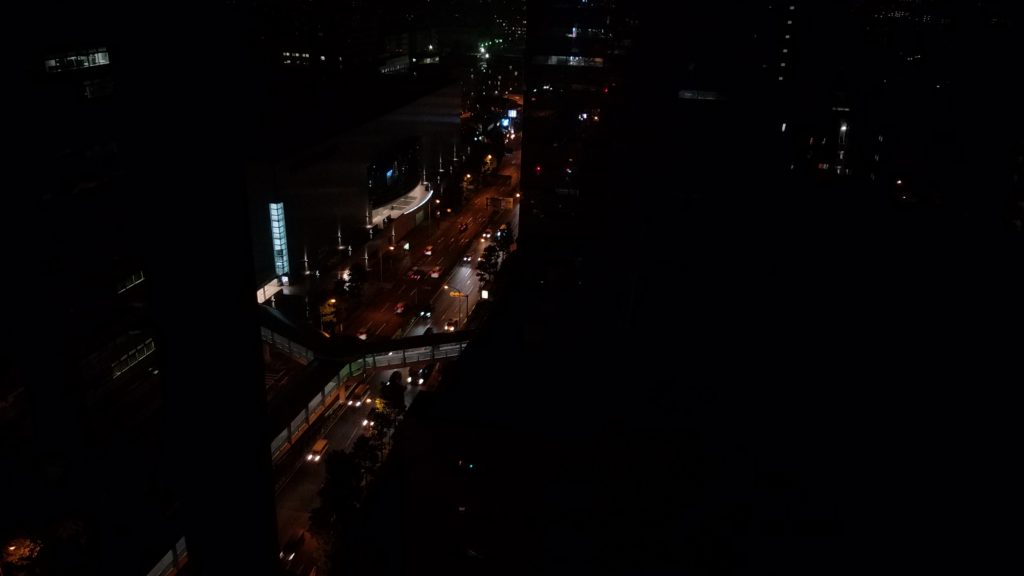 Yokohama bustles away as I look below from my room at night.

More comfortable hours pass, and I’m hungry once again. If we’re going baller status here, then I’m going to the very top of the building and eating dinner in the cocktail lounge. I don’t drink, nor do I ever plan to, but the upscale idea of a jazzy bar atop a tower in Japan just sounded so friggen sweet to me. So I just went up anyways and ordered a fancy dinner. At first, the wait staff were shocked that I just requested plain tap water and forewent my included drink. I explained and they obliged.

My meal was wonderful. I will always remember the view that I took in there and the atmosphere of the room. 42 stories above a rainy Yokohama, while what sounded like the soundtrack to a Fallout game play in the background. A little slice of the good life. I love it.

My view. I watch as clouds lazily pass the top of the building.

Grape Sorbet. Extremely light and airy. It was wonderful.

I leave you with one last short clip that I recorded of my dinner. I wanted to share the atmosphere. What a great night. Damn I’m comfy.