Today is my last full day in Tokyo before I depart for Yokohama. I’ll be back to Tokyo for a few more days after the rest of my trip, but it’s gonna’ be a while before I’m in this area again. Up until now, I’ve actually been very conservative with my money, averaging 3000 (~$30) Yen below budget every day. Japan so far has been surprisingly affordable. I decided that since I was well under budget for the past couple of days, I could splurge a little.

Before I venture out for the day, I noticed that I was on my last set of clean clothes. It was time to try out the laundry machines in Japan. This was actually pretty straight forward. Drop in the clothes to the little washer and add three, 100 Yen coins. Detergent was added automatically and 30 minutes later, the clothes were done. Now, they also had driers available for 100 Yen/15 minutes, so I gave them a shot. Meh. The clothes were still pretty damp. I took them back to my room and hung them up Japanese-style to air-dry. That seemed to work better as by the time I write this, the clothes are dry.

Time to get ready and hit the trains. Already, I’ve mentally mapped out my surroundings and don’t rely on Google Maps for this area anymore. It’s quickly become my little home away from home – I’m a little sad that I have to move on soon. I love Kanda and Akiba. Further still, after yesterday’s excursion to Mitaka, I already felt confident with how the train system worked. I really feel like I’m getting the hang of this place. I proceeded to walk down to Kanda Station and jumped on the green Yamanote towards Ikebukuro. Ikebukoro is one of Tokyo’s many premiere shopping districts and during my visit today I had a specific target in mind.

After a 40 minute train ride, I arrived in Ikebukuro. Here, I encountered the largest crowds of people I’ve seen on this trip so far. This place was hoppin’! My destination was only a couple blocks away, so I proceed on foot down the crowded streets. Where was my final destination? Tucked away within the Sunshine Plaza Mall (A real life Coconut Mall!) was one of the greatest stores I’ve ever visited.

Through crowded halls of shops, I walked deeper and deeper into the mall. As I walk, I notice customers leaving the mall with bags from my target destination. I felt I was getting closer. Then, as I climb the elevators… 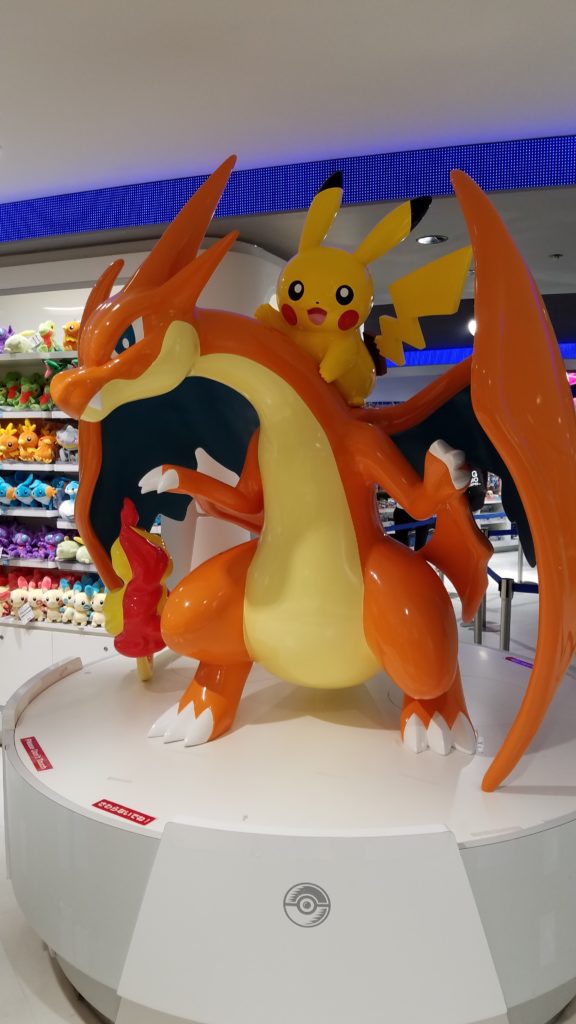 DUDE. THE POKEMON MEGA CENTER! Japan is known for its countless temples and shrines, but as a long time fan of the Pokemon series, I think this counts as one. This store was awesome. Much like many other shops in Japan, the Pokemon Mega Center was filled with wall-to-wall Pokemon merchandise. Stuffed Pokemon, trinkets, cards, games, bags, and various other tchotchkes. This was Pokemon Mecca. I just had to do some gift shopping, as friends of mine (and my sister!) love Pokemon too. It was a bit on the pricey side, but I mean, common. It’s the Pokemon Mega Center in Tokyo…

Within the store lie full sized statues of popular monsters. These things were enormous and awesome. Even the exterior of the store and the surrounding area is completely dedicated to Pokemon with games, murals, and more statues. Here’s a photo dump of some of the cool things I found there: 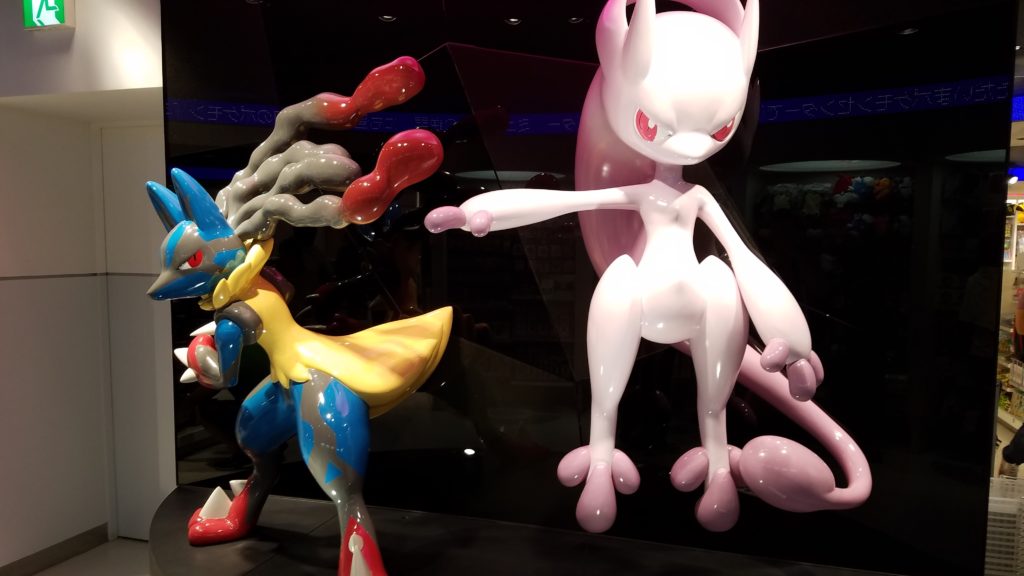 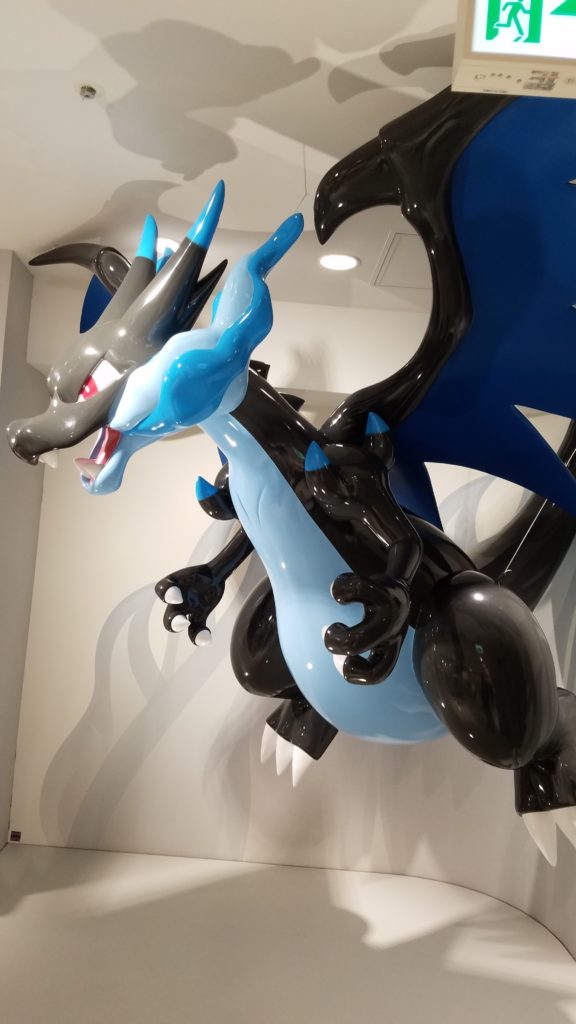 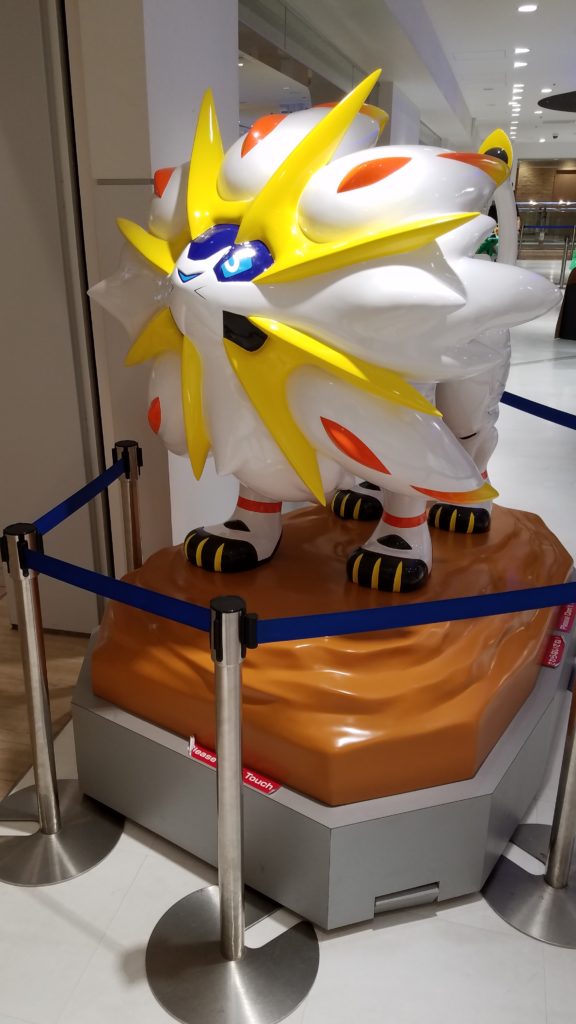 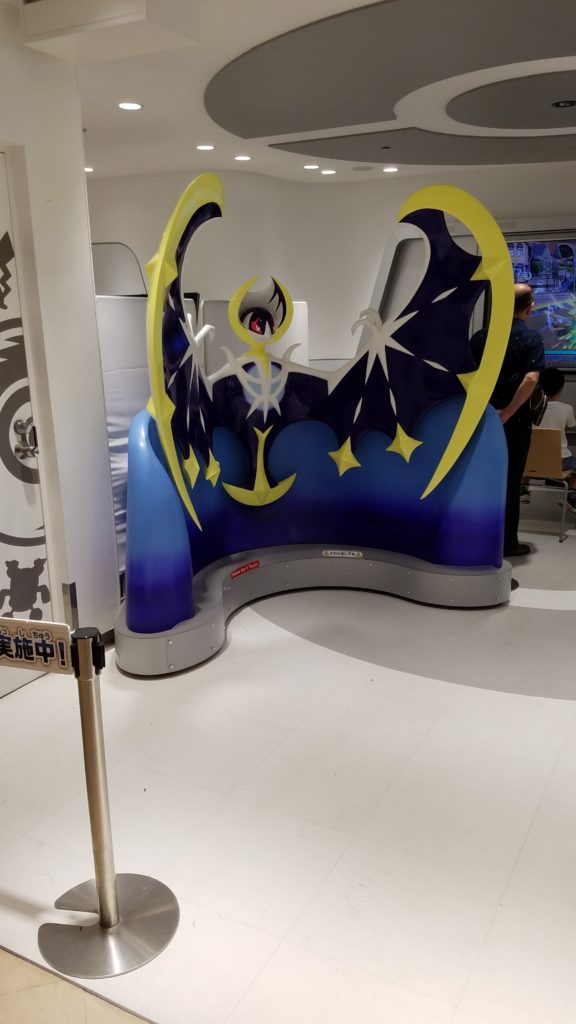 Lunala near the outside of the shop in the “Catch a Pokemon” arcade section.

Exterior of the store 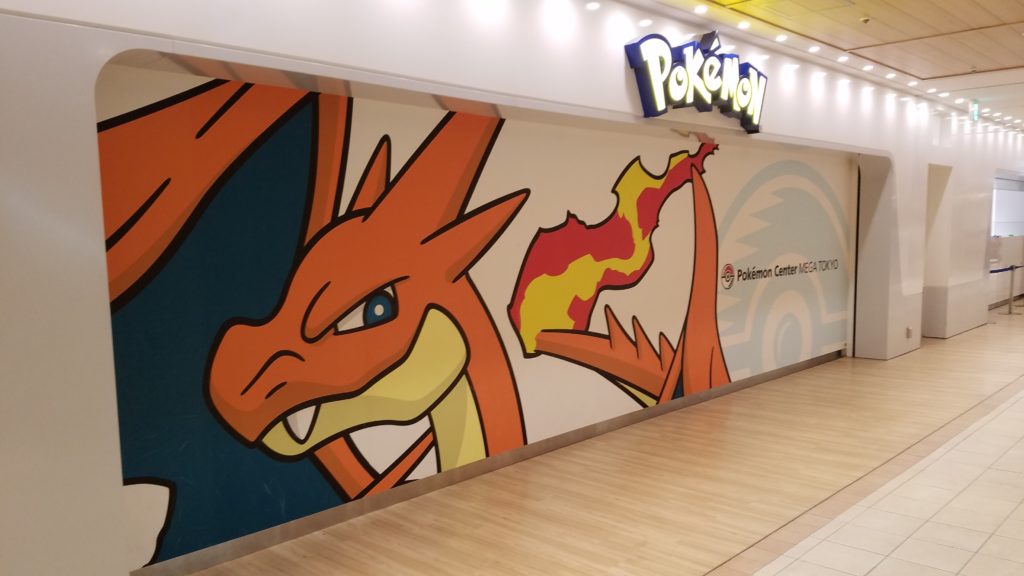 Enormous Mega Charizard Y mural on the exterior of the shop. 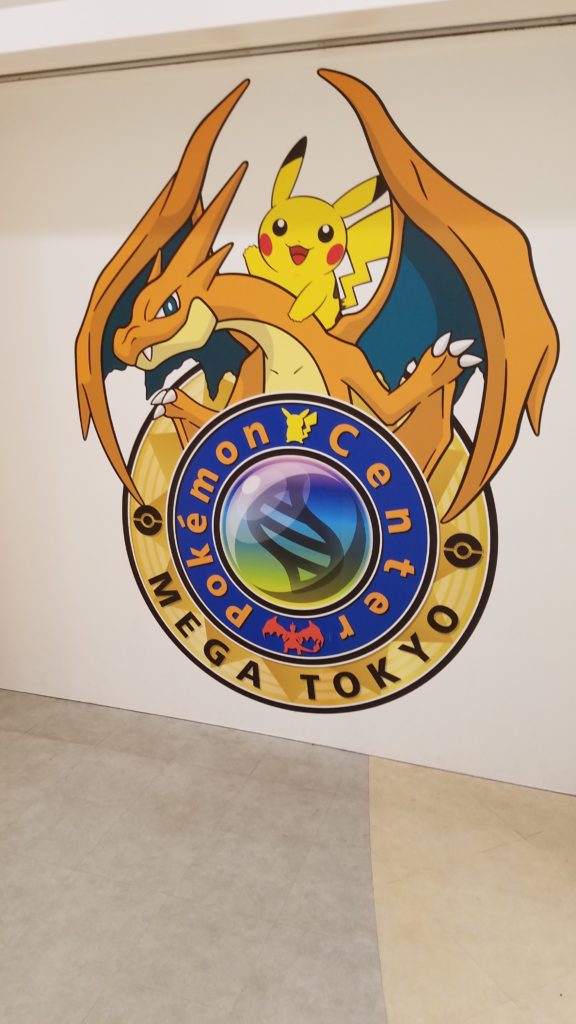 The logo of the store Ft. Mega Charizard Y & Pikachu 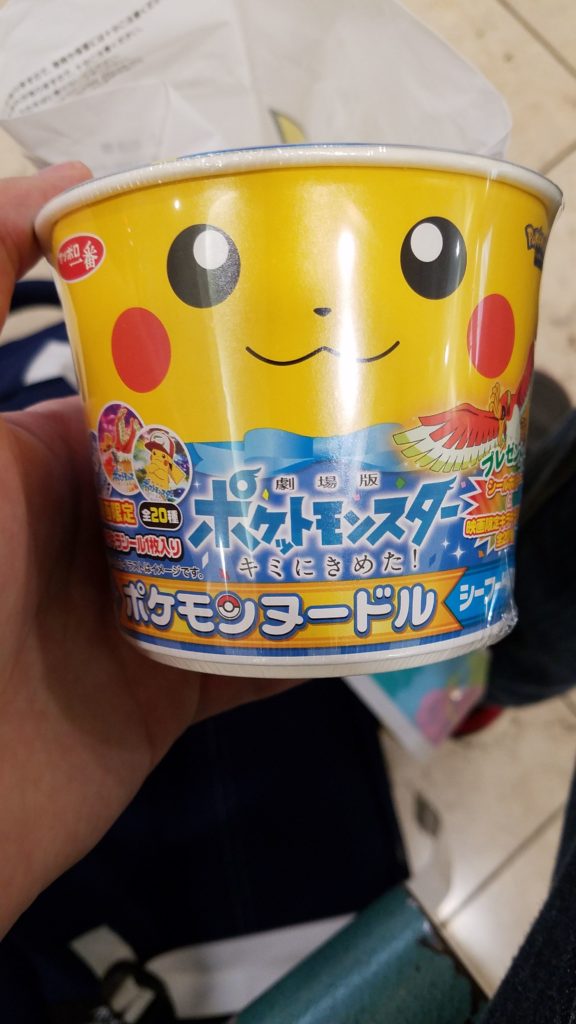 After I was done being in heaven, I was pretty hungry. Since it was Tuesday, I could finally get some fresh authentic sushi. Thankfully, there were a couple sushi joints in this mall, so I wandered a bit until I found one on the next floor up. I walked up to the front of the restaurant and was immediately seated. They brought me a glass of complementary green tea and I began to parse through the menu. All of it looked so good, but I settled on a variety lunch special board. In Japanese restaurants, you are not automatically served by the wait staff. “すみません!” (sumimasen, excuse me) I say as the waitress passes. I point to the large photo of the dish I want and also say “お水をください” (water please!). The waitress quickly tapped the order into her little smartphone looking device and forwards my request to the sushi chefs. A few moments later, I’m greeted with a slate of beautiful fish and miso soup. 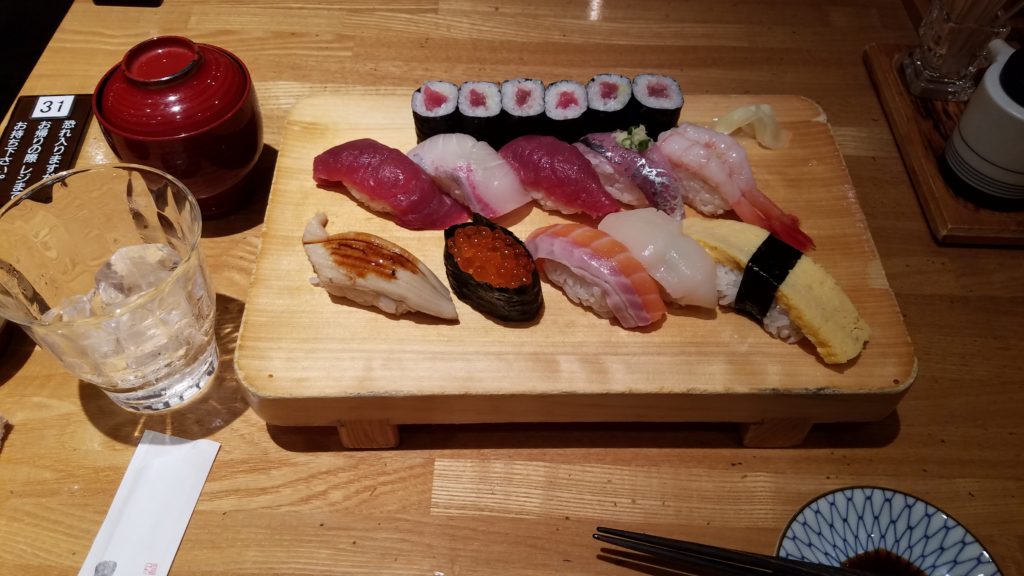 Okay, here comes my first taste of authentic Japanese Sushi. I pick up my chopsticks, grab the Salmon piece first and….
oh. my. god.

America. Step up your sushi game.

That was the most ridiculously good tasting meal of my life. Sushi is completely different in Japan. The cuts are big, flavorful, and the texture of the fish is so perfectly soft. Every single piece was wonderful. That just spoiled me for life – I don’t think I can go back to eating sushi any other way. Also, it was like, $13. Seriously.

After my meal, I wondered where my check was. Usually in restaurants like this, the server will leave the bill at your table and you walk up to the counter to pay. I pulled aside the server to ask, and she directed me to the front counter. Turns out they’ll just handle everything at the counter and there was no need to bring up a check. Once that was finished, I wandered through the mall a little more, then left and explored a bit more of Ikebukuro.

An hour or so later, Ikebukuro was just packed with people. The streets were absolutely alive with humans shopping around, merchants shouting their sales and passing out fliers, and arcades buzzing with excited patrons winning prizes out of skill catchers. Man, Tokyo is just such a neat place. A few moments later, I jumped back on the train and departed for Kanda station to rest at my hotel for a little bit.

As I lay in bed relaxing, I realize that even though I was just steps away from Akihabara, I never actually set foot inside of a book/manga store there. There was an enormous one right down the street, so I figured, “Why not…?” Yet again, floors upon floors packed with any book, manga, or published good you could think of. What is it about Tokyo stores and just having the world’s largest collection of everything? After a bit of looking around, nearly all of it was alien to me. I’ve never read manga before or really watch anime, so I didn’t quite know what was good or not. Eventually I stumbled across something that did actually look pretty familiar. Kobayashi-san Chi No Maido Dragon. A story of a fearsome dragon named Toru, whom which is fatally pierced by a sword, is saved by an average girl, Kobayashi. Toru appreciates the gesture and fearlessness Kobayashi shows towards her (even though Kobayashi was intoxicated after a long night of drinking!), and shape-shifts into a servant into repay Kobayashi.

I picked up a couple copies because why not, “when in Rome… err.. Akiba.” This is definitely a guilty pleasure that I wouldn’t even think about buying in the States, but you know… It turns out these are pretty enjoyable to read. They’re just long comic books essentially. I figured that since I was in Japan, I might as well indulge on the silly things a little. I quote Willy Wonka, “A little nonsense now and then is relished by the wisest men.” 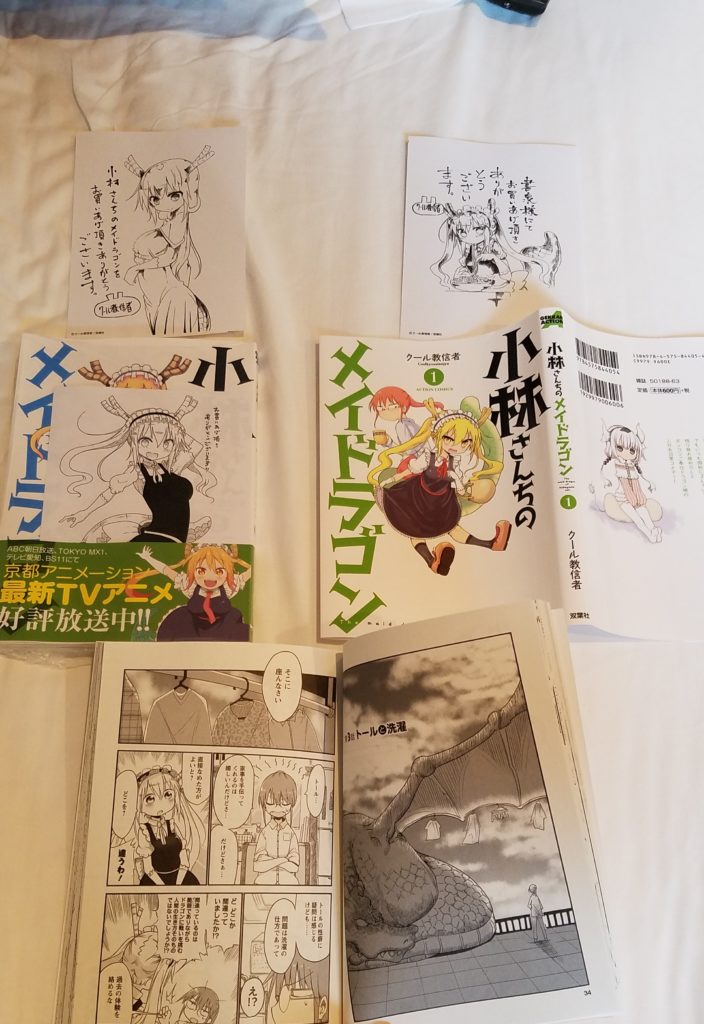 Yep, it’s pretty much exactly what I expected.