My day begins early. I can’t quite seem to get my sleep schedule right yet. After getting cleaned up and ready, I open my backpack and pull out a few folded papers. This was my Studio Ghibli Museum ticket. For those who don’t know, Studio Ghibli is a Disney-owned Japanese animation studio spearheaded by the creative genius, Hayao Miyazaki. Ghibli movies are anime, but they’re different. No other studio comes to mind that conveys such attention to detail to their world-building, character design, and story telling. Each and every story is wonderfully creative and unique in its own way.

My ticket was valid for entry at 12:00. It was currently 7:00 and I was starving and also a bit low on cash. I decided to walk down to the local 7/11 shop to grab some breakfast and visit the ATM they had there. 7/11’s in Japan are SO much better than the ones we have in America. There is no comparing the two as the ones in Japan are genuinely convenient. Snacks, meals, magazines, video games, home goods, you name it. I walk to over to the ATM first. As mundane as withdrawing money normally is, Japan has managed to find a way to make it interesting and convenient. I inserted by debit card into the slot on the front panel and was able to choose English from the main menu. There, I withdrew 20,000 Yen. The machine whirred a bit, then opened a flashing compartment on the bottom shelf while cheerfully playing a triumphant jingle as if the machine was proud to give me the money. Good job little ATM, you did it. 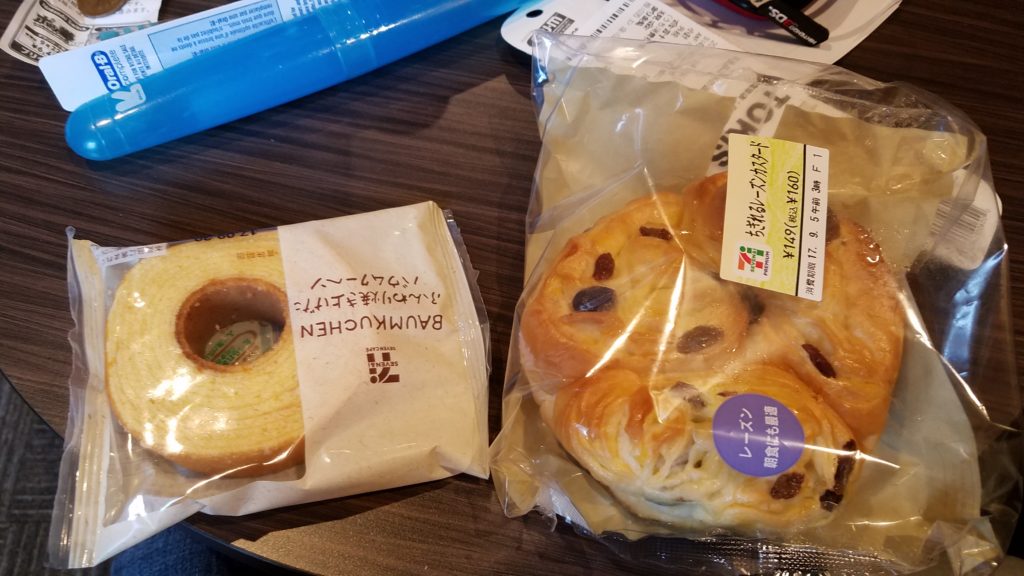 I take back my card and begin to peruse the shop. I was interested in trying out some of the breakfast pastries that I heard so much about. I grabbed a neat rolled-up donut and a raisin bread bun. I also noticed some wasabi popcorn which I just HAD to try later, so I grabbed that too. A lightning-fast checkout later and I was on my way back. The little donut thingy was super delicious as was the raisin bread. Japan has a much more subtle approach to sweetness than America does. Honestly, I like it more. I personally think our food back home is much too sweet.

After breakfast, I brushed my teeth and prepared to head-out on the trains towards the city of Mitaka. Up until now, I’ve only used the N’EX train from the airport. That train was pretty straight forward to use since it only goes one way and is clearly designed for foreigners. Needless to say that I was a little nervous about taking the real trains, but honestly, it was one of the most efficient processes I have ever seen. The Japanese have trains down to a science. I walked to Kanda Station and found the RFID gates. There, same as last time, an attendant sits inside of a glass room. I briefly flash my rail pass and am waved through. That was it? Okay!

Next, I needed to find the orange Chuo line. Every Japan Rail train line is color coded along with all the signs leading up to the station platform. Only problem is that there are two trains per line: one that moves forwards and one that moves backwards. I accidentally chose the backwards one first… whups. Thankfully, fixing that mistake only meant that I get off at the next station (only took about 2 minutes) and wait for about 3 minutes until the next train arrived in the opposite direction. Easy!

The morning trains at the time I left, which was around 10:45, were not crowded at all. The train itself moved so quickly through the city and was very quiet and smooth. I watched more of Tokyo go by and noticed a whole bunch of big, flashy, and interesting looking places that I would love to visit. There is so much to see here – I could spend a thousand years in Tokyo and only experience a small percentage of it. After about 50 minutes of travel (really felt more like 20), I arrived at Mitaka Station. There, I followed the signs to the exit, flashed my pass at the gates, and I was off. Now I needed to find the museum.

My walk through Mitaka was lovely. It was lightly drizzling and took me through some of the small communities of houses and tiny businesses. After a little walking, I spot Totoro, Ghibli’s mascot, atop an information sign. I must be getting close. I eventually arrive at a large park and see signs that say the area is a nature preserve – fitting given Ghibli’s frequent themes of nature appreciation. Futher still I walk until I see a little green sign. 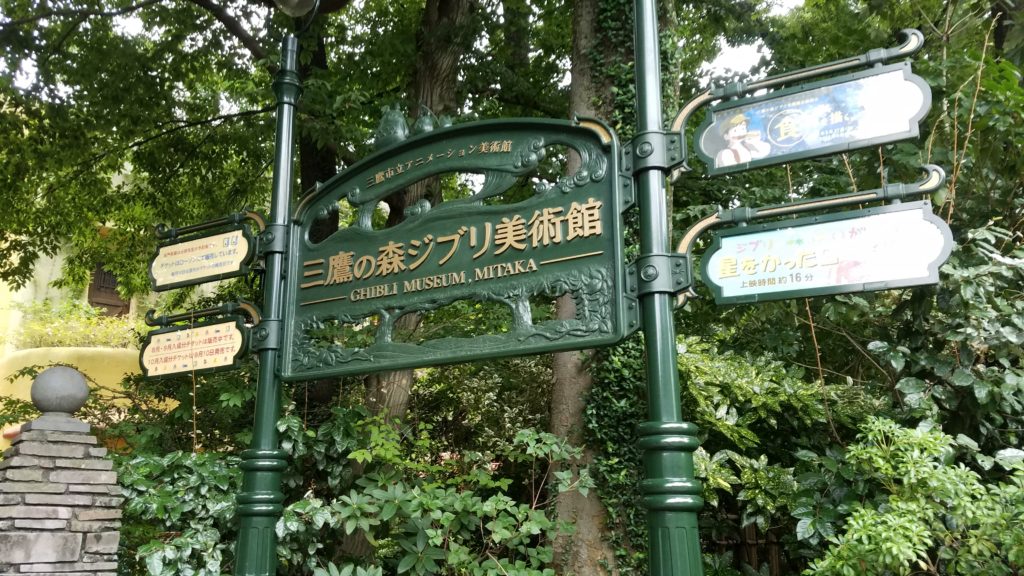 It was the Ghibli Museum tucked away quietly inside of the nature preserve forest. The entrance lie just left of the sign. Immediately, you see Totoro sitting at his yellow Ticket booth to greet you.

Totoro, who just so happens to be my neighbor.

Just right of Totoro, a large line formed underneath several Ghibli-themed easy-ups. After a short bit of waiting, I was taken care of by the attendants and was given an awesome movie ticket for the short film being shown inside of the museum. The movie ticket contained three frames worth of genuine film strip from a Ghibli movie. How cool!

One rule of the Ghibli museum is that you’re only allowed to take photos while you’re outside. You may not take photos of the inside of the museum. This not only prevents people from blocking and ruining the exhibits, but it keeps this place a magical mystery to those who have not visited yet.

The exterior of the Ghibli Museum.

The exterior of the building is decorated with multiple colors and features a distinctly Ghilbi-style architecture. The entire building is surrounded by forest and is very close by to a large park. It’s green, alive, and beautiful.

Once I was inside, I could instantly tell that all of the attention to detail and gorgeous artwork that Studio Ghibli is known for is fully resolved within every inch of this testament to art. Murals on the ceilings, carved-out wooden paneling, Ghibli-esque mechanical marvels, art everywhere. There was a lot to take in.

The first thing that I wanted to see was the museum-exclusive movie. As soon as I entered, I saw a crowd of people waiting within the western wing of the building. I joined them by first handing my ticket to the attendant, who then stamped it, and gave it back. I was relieved to find out that they allow you to keep the ticket instead of confiscating it… because it’s so neat lookin’!

Excerpts from the film I saw.

The theater was small with little red seats. Of course, it was head-to-toe covered in the creative stylings of Miyazaki. “星をかった日,” (The Boy who Grew a Star) the film I watched, was about a farmer boy who grew enormous turnips on his plantation. While traveling on his old, sputtering motor bike, he stumbles upon two unique characters – a frog man whose eyes poke out from his hat and his mole friend. The boy is offered magical seeds by these two characters. He decides to pick one and plant it. Eventually, a little floating world appears from it. Depending on what the boy did to care for the miniature planet would alter its attributes. It was whimsical, magical, gorgeous, and fun.

After the film, I wanted to see what was on the other side of the building. The philosophy of the museum is to “not worry about getting lost. Just explore freely and see what you can find.” In this room on the opposite end, a massive collection of zoetropic carousels were on display. They were just breathtaking. Each and every “frame” of the zoetropes had to be modeled out and positioned just right to give the illusion that they were animated under a strobing light. Within the same room was a massive and overly-complicated film projector exhibit that let you peer onto the raw film as it whirred through countless reels and gears. Up a few more levels and you will find a recreation of Miyazaki’s work rooms. They’re beautiful and covered in wall-to-wall sketches, character design sheets, and props. They even had an interactive camera rig on display that would demonstrate how zooming and panning is done in an animated film. Further still, inside of another room was an exhibit on the design process of characters eating food in films and how food should behave on screen. It sounds a little odd to someone that hasn’t seen it, but it was interesting and extremely fun. Real models of the food eaten in the films were on display as well as all of the base sketches that showed how a character would eat something. Ghibli is very good at making animated food look delicious. 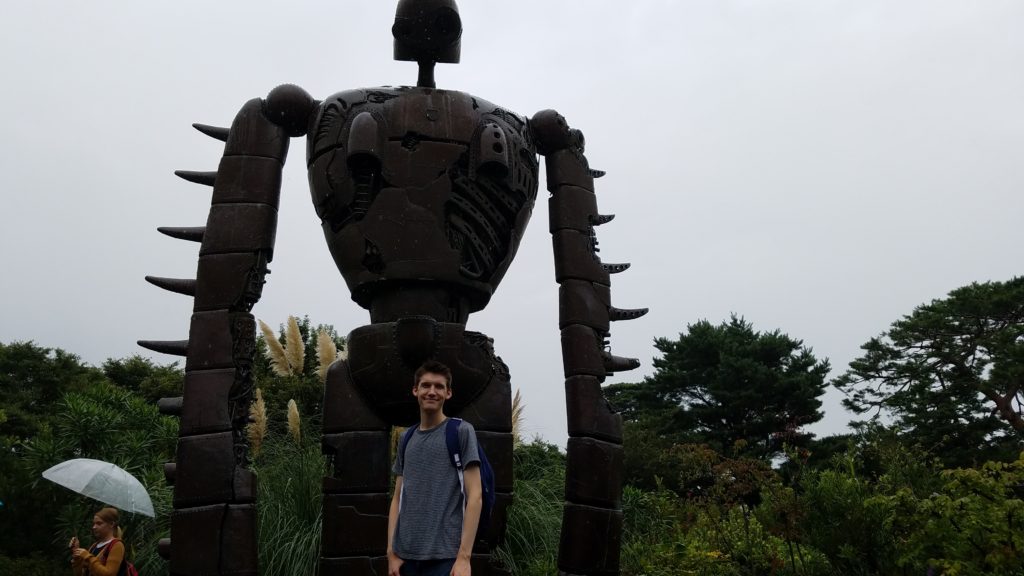 He was huge. Thank you to the lovely people who took my photo!

I eventually made my way up to the top of the museum and saw the full-sized cat-bus exhibit for young children to play on. Cute! Just beyond the cat-bus was the exit to the roof garden. Up a flight of green colored spiral stairs lies a silent giant basking in nature. The giant robot from Castle in the Sky. There he stood with open arms enveloped by the garden which he watched over. I met a couple people from Turkey who requested that I take their photo. I obliged, and in return, they took mine. How nice!

After a bit more exploring and “taking it all in,” I was getting a bit tired. The very last thing I wanted to do at the museum was to relax in the garden in peace. So, I did. I found a little wooden bench next to a broken brick well and just sat.

I hear nothing but the wind push through the trees and birds softly coo in the distance. The iron golem stands off in the distance, unmoving. Serenity in my own personal Ghibli movie.