Recharged and ready. Time for Osaka.

I’m sure you’re well-aware of my disdain for tourist traps (even though I seem to find myself in them all the time. I like the Pokemon center, OK?). Sometimes though, you do have to journey into the thick of it in order to enjoy some of the iconic scenes and structures found within the country you’re visiting. Today, I’d like to take Abbie to visit Osaka Castle and the famous Dotonbori street for dinner.

But first: I need some coffee. As much as I like the crappy cheap canned stuff, I wanted some coffee. Since we’re in a quiet residential area away from the chaos that is central Osaka, I was certain that there would be a little homely coffee shop around here.

…And right I was.

Right down the street from where we were staying, right next to the old shopping arcade was a little coffee shop ran by a single humble man. This was very much a local coffee spot filled with people that live in the area. After we were served, the owner asked “Where are you from?” “Yes.” I replied. I misheard him at first and thought he was asking if we wanted sugar. He clarified and.. Ohhh… “Where are we from?”

“America-jin desu” (We’re Americans). “Welcome to Japan” he replies. Aw, that’s nice. It’s very rare to find people that are interested in where you’re from and will actually ask you. In general, you’ll never really be inquired for anything, especially in the bigger cities. Since we were in a little local coffee shop away from the bigger tourist areas though, we had a little more room to breathe and I think that reflected in the local’s curiosity towards us. It’s quite refreshing honestly.

Anyways, the coffee he served was perfect. When I say perfect, I mean it was a perfect cup of coffee how did you make this it’s so good. Brilliantly smooth, rich flavor, no acidity (nice, m’kay). The thick-cut toast was so soft and coated in perfectly salty butter. The hard-boiled egg was also perfect. I am 100% coming back here tomorrow morning. I really enjoyed that coffee and the owner was super nice too. If you’re ever in Japan, find your way over to the smaller businesses instead of massive chains and tourist joints. It takes a little bravery, but you will be rewarded with tastier food and more genuine experiences.

We paid our bill (only 700 yen for both of us!) and set off through the shopping arcade towards our train station. The arcade was just waking up and all the morning markets just started to put out all of their goods.

I want (good) trains at home so badly

Let’s head to Osaka castle and explore the grounds a little before stopping in and grabbing some lunch near the area.

Look what’s off in the distance! 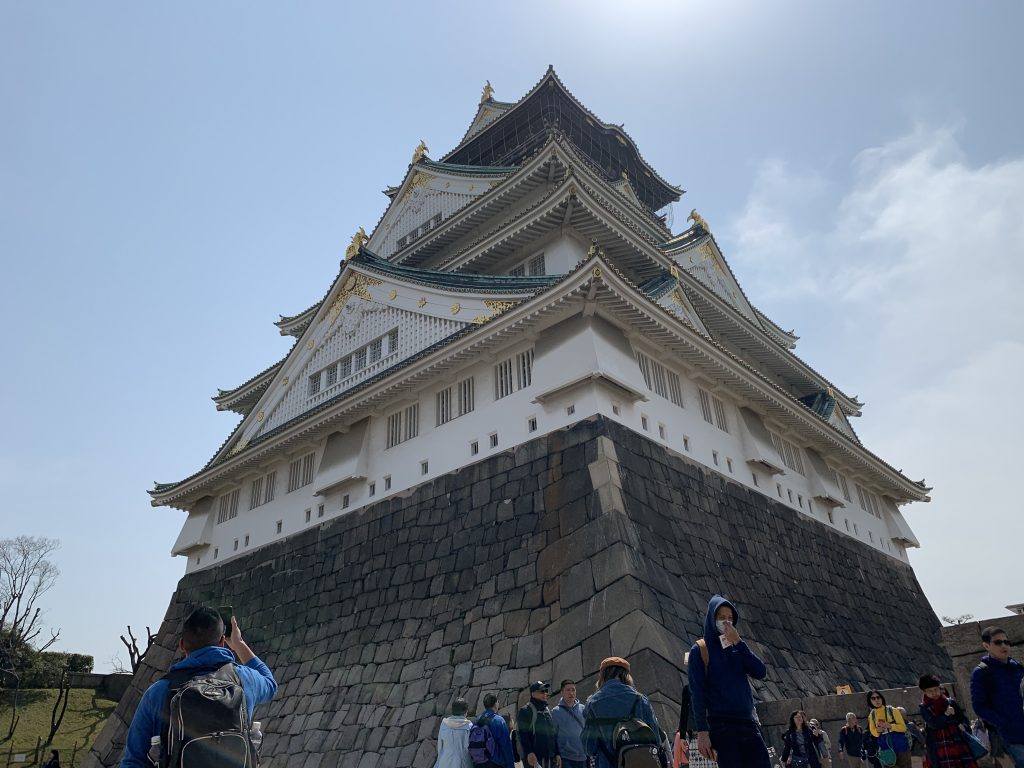 After a billion stairs, there it is!

Abbie has a series of photos where she T-poses in interesting places. The reaction of the man to her lower right sums up everything.

Inside of the castle is a museum full of art and artifacts from the 17th century. Really neat stuff, so let’s just go and grab a ticket and.. oh.. oh my god.

THE HORDES ARE HERE. It was Sakura (cherry blossom) season and the trees were just beginning to bloom. This will result in two things: Wonderfully beautiful trees filled with delicate pink/white flowers, and unbelievable amounts of pushy-shovy tourists in crowded places. I already know that the inside of the castle is crowded since I visited it last time, but this time, the line just for the tickets was wrapping around the building. Nope, not happening. There are better things to appreciate.

Let’s get away from the suffocating crowds. I know a little secret place here.

A secret place with a view and a new bird friend

There was a local artist drawing the castle from a distance with charcoal, colored pencils, and water colors. Beautiful. Up where we were, there was nearly zero people. Peaceful.

We stayed up top here for a little while before we saw a tourist flag of death. Holy crap like 100 people swarmed in behind their flag carrier and unapologetically blocked the view of the person that was painting in peace. Guys seriously wtf? Alright, I’ve had enough of this, let’s get out of here.

We waited for the horde to take their photos and clear out, then we made our way to the exit on the opposite side from where we came in. At the same time, my parents, who were celebrating their 25th anniversary (Yay! Congratulations!!) at Disney World were sending us photos of their special sushi dinner at Epcot’s Japanese restaurant. It looked really, really, good and that toast we had for breakfast was burning off fast. Let’s go find some sushi too!

A little walking later and we arrived to a bustling sushi shop serving up lunch specials as fast as they could. I’ve never been to a place where you’re served like this before. Immediately, the waiter came up to us with two pre-prepared meals, one was sashimi donburi while the other was a sushi assortment. It looked like she just had someone else’s meal and was just demonstrating what the two lunch specials looked like. No, what she was actually doing was saying “pick one and you’ll get it right now.”

Once we figured that out, we had a sushi set within literal seconds. Woah.

While the sushi was good (excellent by American standards), it was definitely not the best I’ve had in Japan. It felt rushed and the rice wasn’t packed very well. The wasabi factor was also cranked up to 12. Normally, I can resist wasabi just fine but god my nose was obliterated. Not bad fish and cheap as all get out. About $12 for both Abbie and I with Miso soup and tea. Nice!

Yeah, here it is. Quiet, peaceful… and full of newly blooming cherry trees (not being pulled apart this time!) 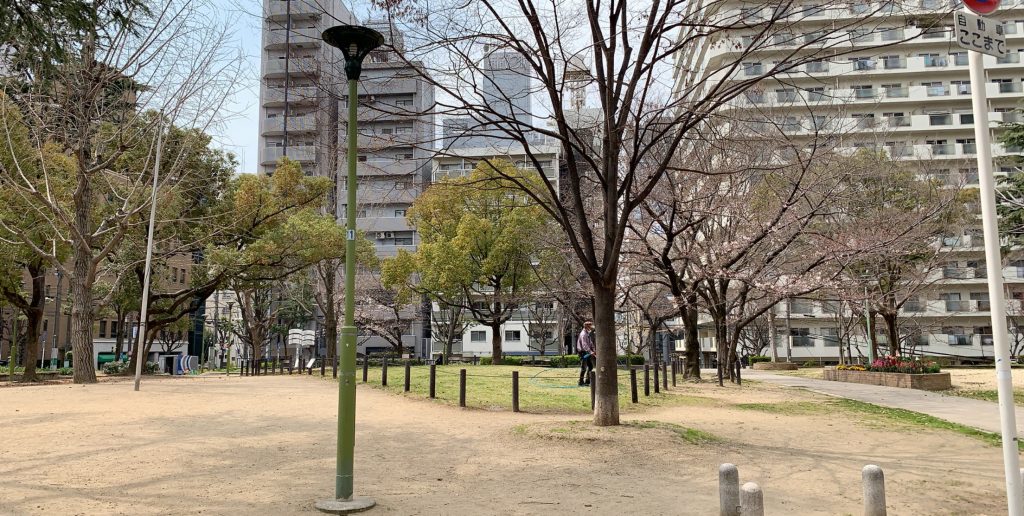 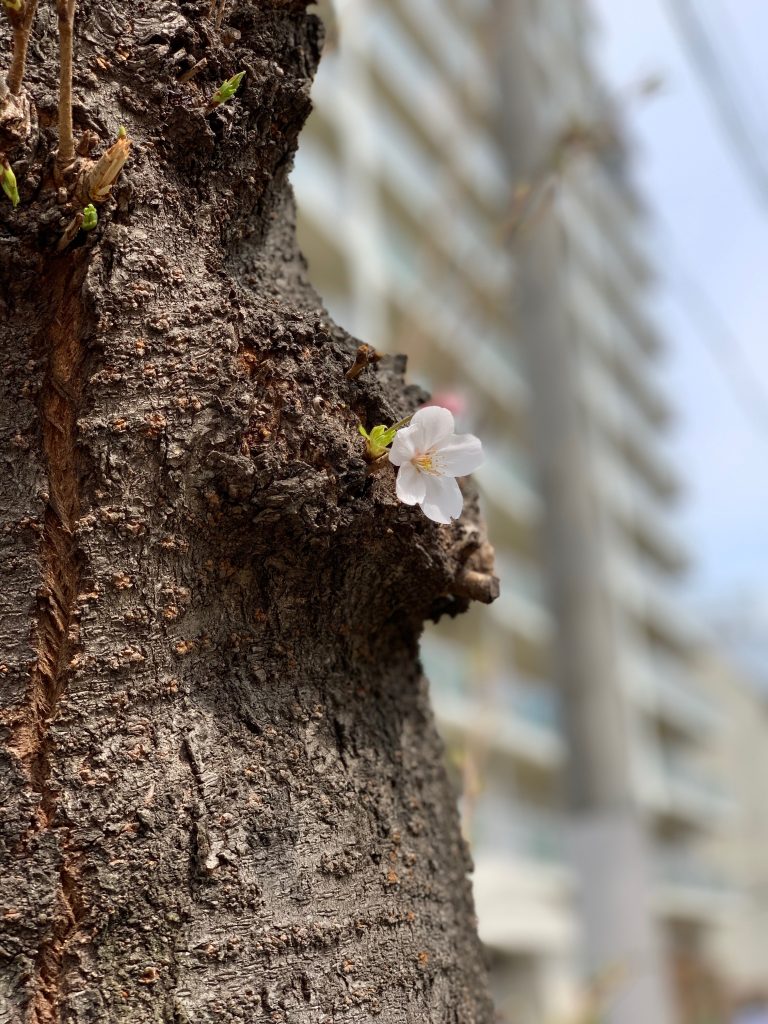 It’s nice to spend a little quiet time watching the world go by.

After about 20 minutes or so, we decided to take the long-way through Osaka back towards the JR station. We could have just used the metro, but sometimes it’s fun to just walk around town. We really have gotten better weather than we could have ever asked for. Mild weather with very little rain (and it only snowed at the Ryokan which was AWESOME). Couldn’t have asked for anything better.

We arrived back at the apartment and rested up a little.

…Let’s go to the Pokemon center at Osaka Station. Why do I do this to myself? Oh I know, the pursuit of overpriced merchandise with a bunch of cute fantasy animals on it. Worth it. I’ve had my fill on merch (I think), but Abbie was on the hunt for a Lucario plushie, so I couldn’t deny her that. We headed off to the MASSIVE Osaka Station shopping complex and made our way up to the thirteenth floor. There was a massive bridge over all of the train tracks with a “popup” artificial park laid out.

Packed, crazy, loud, chaotic. But they had Lucario so it was worth it.

Rowlet: One of the very best

I’m hungry again. Let’s hit up Dotonbori Street for dinner. I already knew that this place was going to be a crowded nightmare, but it’s one of those supremely iconic areas that Abbie just has to see with her own eyes.

We also got to experience rush-hour trains in Japan. Squishy. 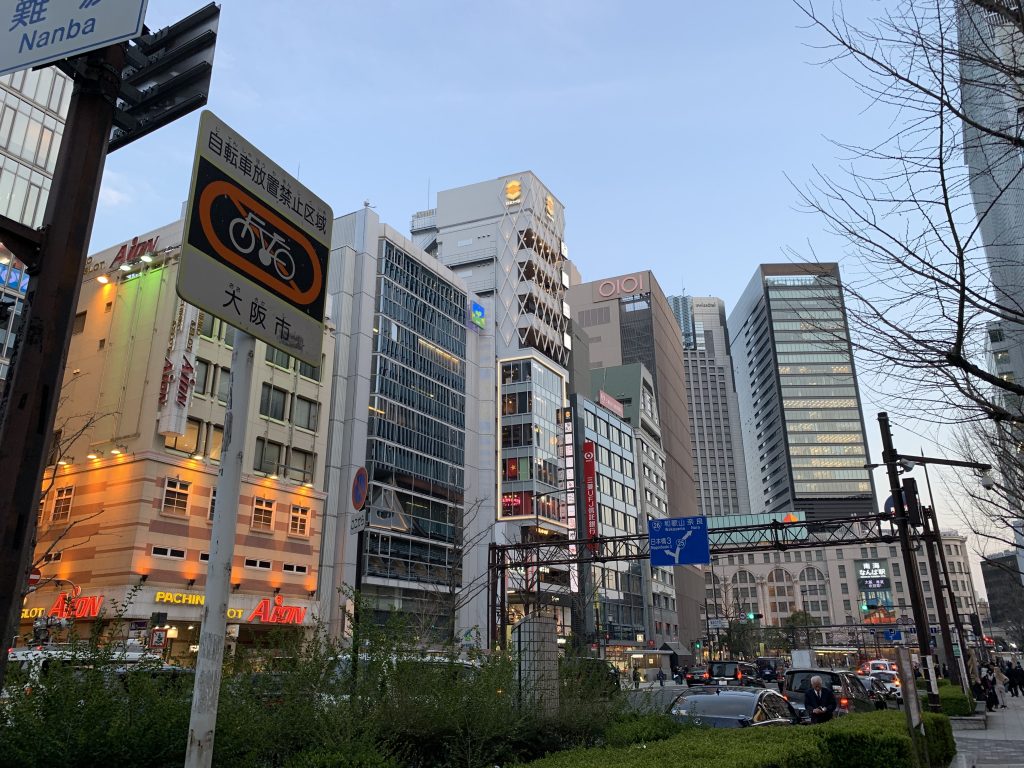 Freedom from the subways 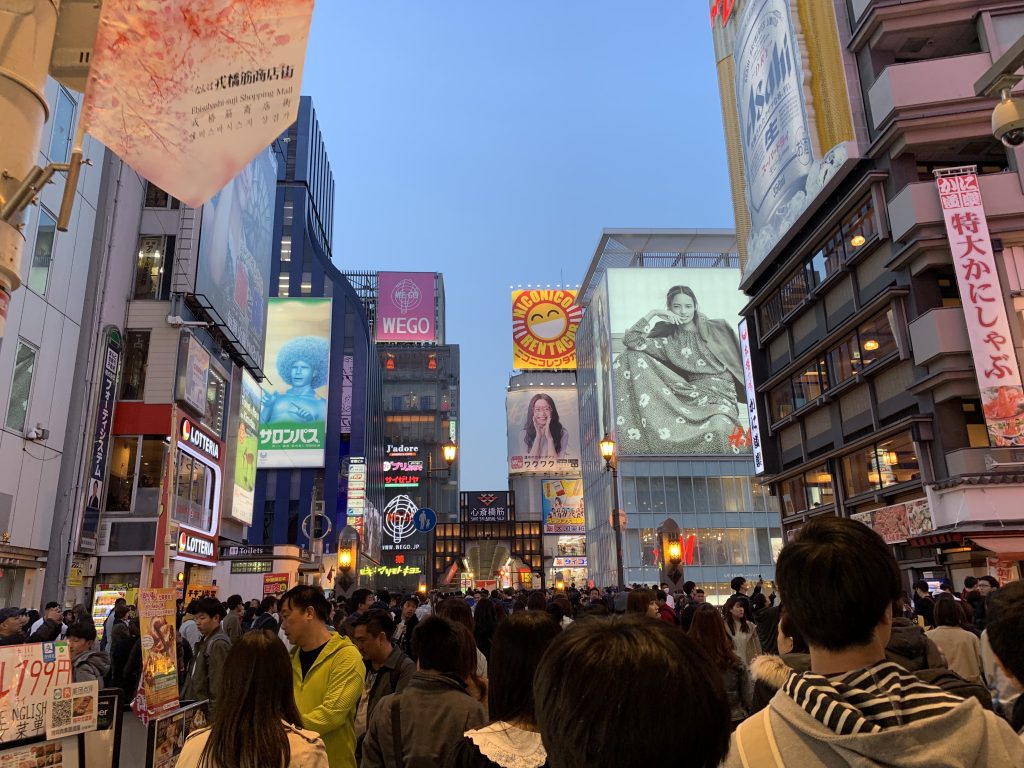 Getting closer (look at the sea of people) 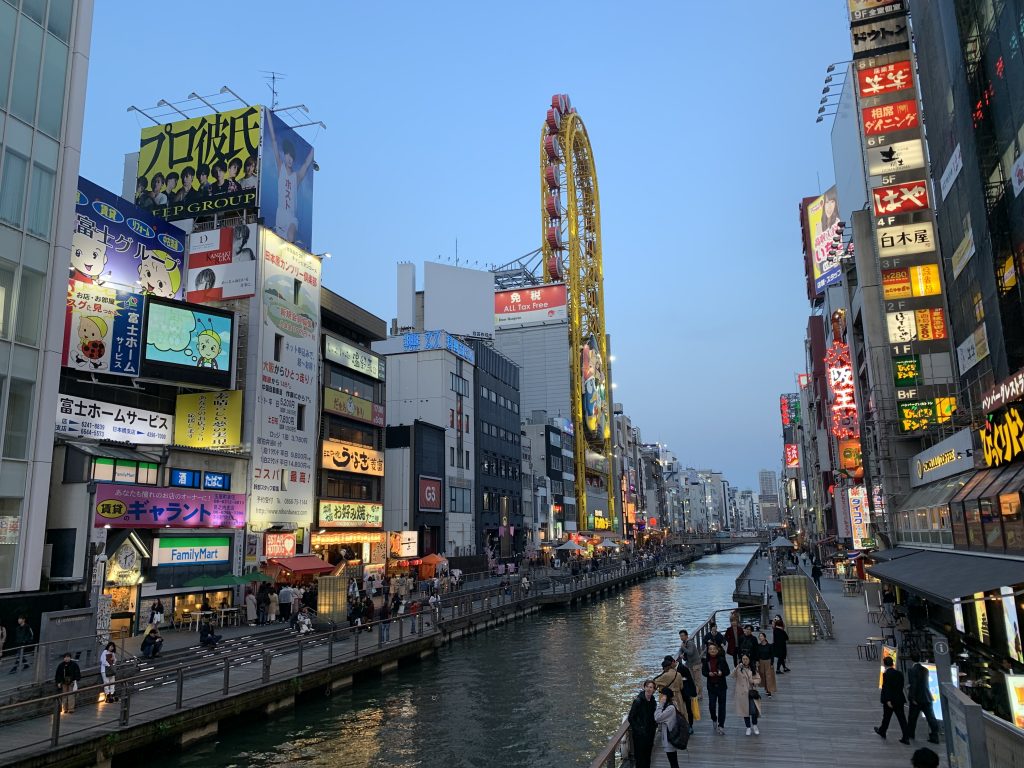 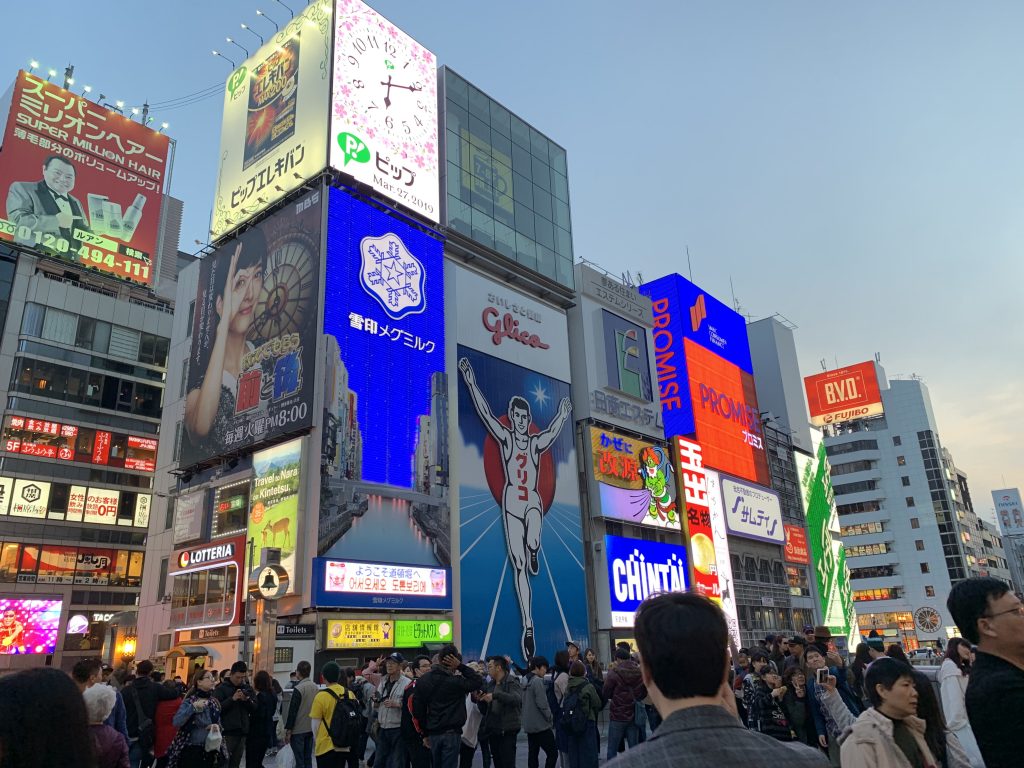 Not quite ready yet. Check back in five. 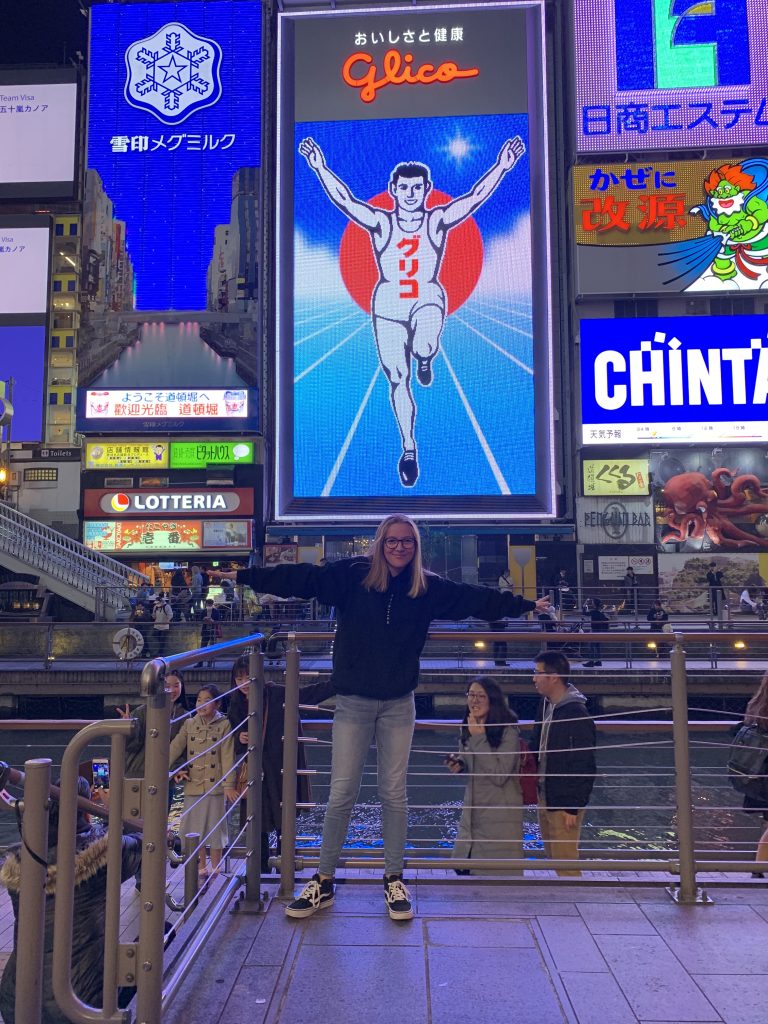 Oh yeah, there he is 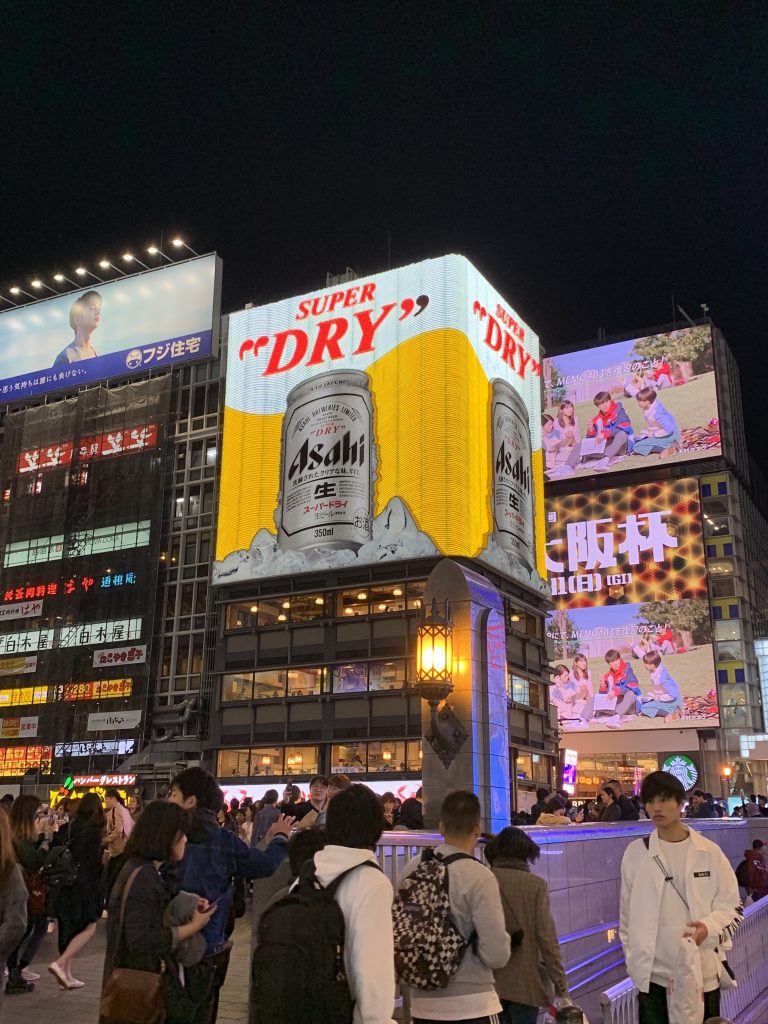 Okay, so, all of these shops and stalls, even though I bet you they’re pretty good, are PACKED with lines, lines, and more lines of flag-groups. Yeah, no. Thanks but no thanks.

I know what to do.

Head down some of the side streets. Find alleyways that lead into seemingly nowhere. That’s where you’ll find the real deal. You see, most of these tourists are here to grab a photo and that’s about it. Move away from the less photogenic part of town and the crowds dissipate almost immediately. The character of all the buildings swap from flashy and loud, to low-key and genuine. Rust. A sure sign of the real world.

Only moments later, we find an empty izakaya with a single older man just waiting for customers and watching some TV. I slide open the door and ask him if he’s open. Sure enough, we’re immediately welcomed in, one-on-one. This was gonna be awesome. He gives us the menu and we only had to ponder over it for a few seconds to know what we wanted. In goes our order and he gets to work, freshly slicing and seasoning the meat he was going to serve to us. A few minutes later, he stepped outside and brought in our own little charcoal grill which he fired up when we arrived. AWESOME. 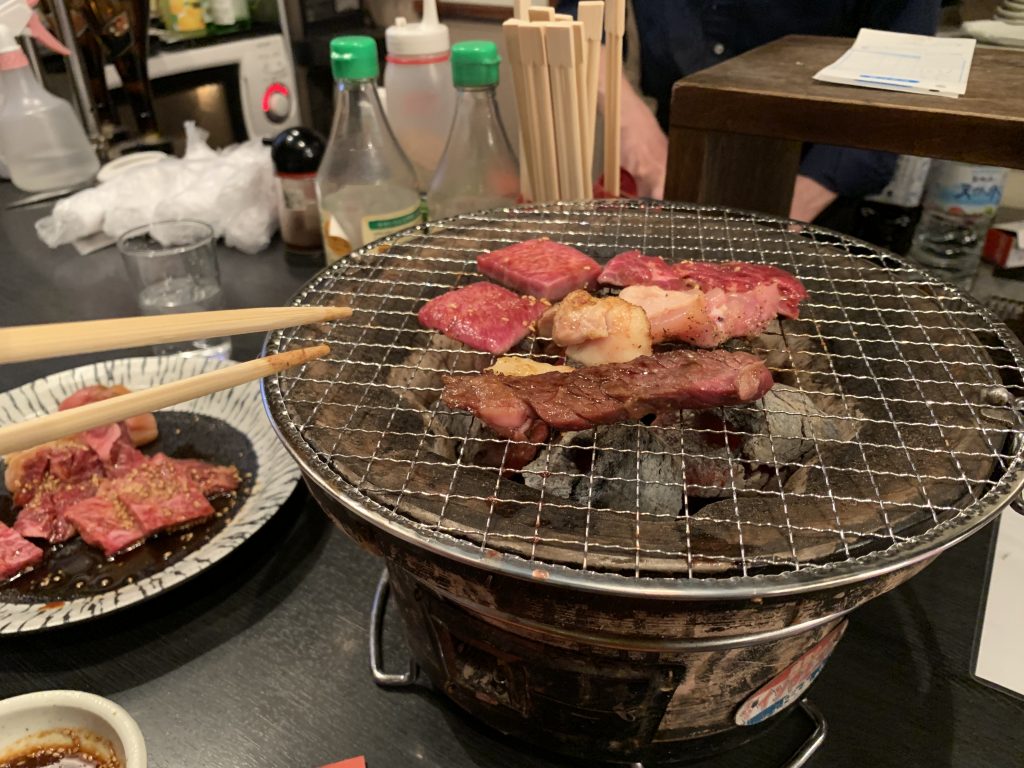 Hard to beat this.

The meat, was of course, to die for. Carefully seasoned, rich and flavorful with a dipping sauce he prepared right in front of us. The owner was soft-spoken, but very polite and appreciated our ability to communicate in Japanese. The chicken was so delicious that I had to get another round of it. He discounted the price by 200 yen – aw man thanks! He also was preparing soup when we arrived, and had just finished chopping up the green onion that would adorn it. He gave us two bowls of it free of charge and it was SO delicious. Light onion soup with bits of beef and fresh green onion. So light and tasty.

This was so nice. Away from the craziness and way more genuine. Always remember to stray off the beaten path and find something special for yourself. It will be worth it and you’re supporting small businesses.

“Gochisosama deshta,” Abbie and I exclaim after our meal. He saw us out with a smile and we were on our way back to the apartment. After another crowded train ride, we hopped out at a different station and decided to walk through the massive shopping arcade alleys at night. It seems spooky – almost like a theme park attraction, but since the crime rate in Japan is virtually nonexistent, you’re completely safe. This maze-like arcade twisted its way throughout the community. You could see late night food vendors selling their goods among the hundreds of shuttered stalls. The smoky atmosphere provided some awesome dramatic mood lighting for the area. It really does feel like you’re in a movie.

After about ten minutes of walking through that maze of stalls, we emerged to our main street.

The unassuming entrance to a massive shopping arcade in the dark

This part of town has a cool nighttime atmosphere.

There’s even a Takoyaki street stall right in front of our apartment. Yeah, we’re gonna have to check that out. I love Osaka.