The day starts with the morning sun peeking through my Nagoya apartment window. I had quite the journey set before me today. Before I continue down south towards Kyoto, I wanted to spend a night in the more rural city of Takayama. A city found within the mountains of central Japan. To get to Takayama, I had to take a special train all the way up the mountains. Fortunately for me, this special train was covered by my rail pass, so no problems there.

Before that, though, I needed to get ready and get some breakfast in me. I took a morning walk through Nagoya and about half a mile later, I found a 7/11 where I topped up on cash and got some pastries to eat for breakfast. Mornings are always so peaceful in Japan. I take great pleasure in simply walking to the convenience stores in the morning just to experience what the early day is like within each city I visit. After my visit to the store, I head back, eat-up, and get ready.

It was a little sad that I only had this apartment for one night. It was so cool! Oh well, off to the next adventure. I head out at around 10:30 and begin to walk the streets of Nagoya towards the train station. All the tiny kei-car sized delivery trucks and their drivers were offloading goods to stores and restaurants. It’s always fun to see what kind of crazy things they pull out of those trucks. Fish, fresh vegetables, bottles of booze… I’ve even seen a whole frozen pig delivery!

A mile and a half or so later, I arrive at Nagoya Station. Google Maps suggests that my train towards Gifu/Takayama departs at 11:40, but it was 11:10. As I walked up to the station platform, I noticed that there was already a train there that read “Gifu.” Well, that’s the station I’m going to anyways. Should I just ignore Google Maps and board this mystery train that may or may not end up in the city I’m looking for? Sure, why not. Turns out, I was correct. Again, it’s the little day-to-day successes that are most satisfying – even if it’s just correctly reading the destination sign off of a train. After an hour and a half, I arrive at Gifu station and wait for my next train towards Takayama. Already I could tell that my surroundings were getting a bit more rural. The city hues of blue, grey, and white were fading into blue, green, and brown. A little more time passes, and the train to Takayama arrived.

Now this train was special. Even though it was the only arterial rail line to Takayama, it was a specially designed train with very large windows so passengers could enjoy the scenery. The train was definitely older. The doors stuck a little more, there was a lot of worn down carpet on every surface, and the chairs looked a bit more weathered. Further still, instead of the wonderfully futuristic electric trains of the big cities, this beast of a train was running on straight diesel. Definitely not as clean and sleek as the city trains, but the ride itself was incredible.

As you can see from the video above, I was pretty far out from the mega cities and was plopped right into rural Japan. Every so often, a prerecorded voice (as heard in the video) would point out interesting facts about the scenery or any historic buildings that we passed.

The Hida 9 train route cuts through all the mountains and follows the Hida river leading up to Takayama. It was the single most scenic ride I have ever taken in my life. The entire route was gorgeous. I took lots of photos, but the onslaught of beautiful views just never ended for the entire 2-and-a-half-hour train ride train ride. Just incredible! 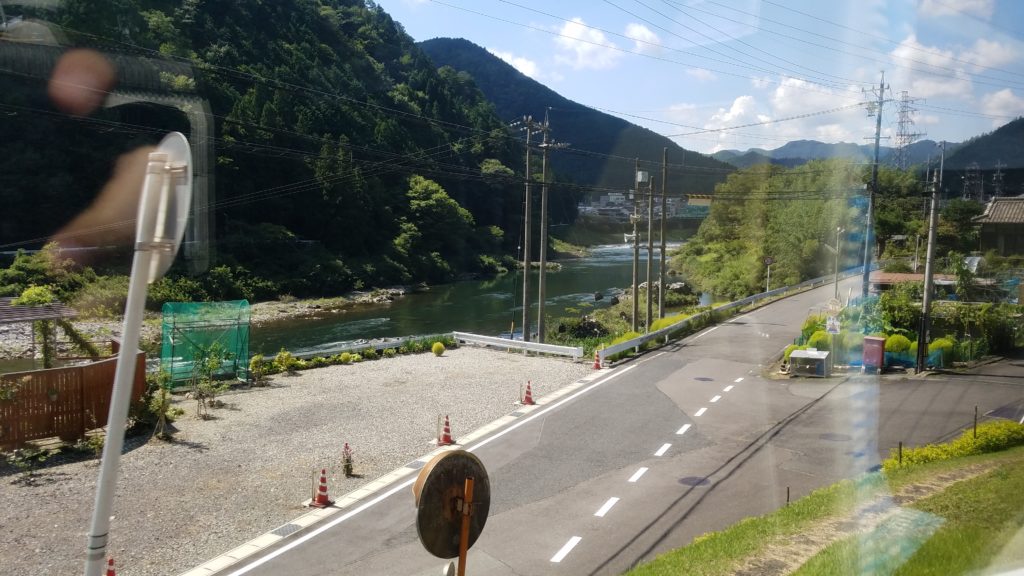 The incredible views were never ending. While the river scenery was beautiful, one particular part of the ride stood out to me. When we hit the valley of seemingly infinite rice patties:

After that unbelievable train ride, I was in Takayama. I’m excited for tomorrow since I get to take that same route back down towards Nagoya again! But now, it’s time to focus on Takayama. Takayama is most famous for its well-preserved “old-town,” where Edo-period buildings still remain in remarkable condition and are still in use. After checking-in to my hotel and relaxing a little bit, I strapped my shoes back on and went for a 7 mile wander throughout the town. There we a lot of tourists here… I mean.. A. LOT. Which was odd to me since this city is pretty far out from any major airport or city center. Eventually I come to realize that Takayama is kind of a scenic vacation hot-spot and shares similarities with the small tourist towns that you’d find near beaches and lakes back in The States. Fair enough, but I didn’t really expect that.

I wandered through the streets of Takayama for 45 minutes or so, actively avoiding the hordes and hordes of tourists. While the weather and location were very pretty, I didn’t really find anything of significant interest… Should I just jump-in with the gawking mass of humanity that is currently swarming the Old Town just so I could see some neat stuff? …Yeah.. And just then, as I turn onto yet another random street. I see this:

A temple. Far away from the busy hustle and bustle of the tourist hot spots. Almost as if by fate I should stumble across it. At first, I didn’t know if it was open to the public, so I cautiously walked up to the gate, then noticed that a few people were freely coming and going, so I proceed. Under the gate stands no guard, only a large chest that makes no mention of monetary requirements for entry. Just a lowly, humble wooden chest with a slot on top where it is up to you to donate money. Since I was a guest to this temple, I saw it fit to give the humble chest my loose change. I continued on towards the main building in the center of the temple campus. Everything was so well kept and clean.

Up the stairs I walked when I noticed that the temple door was opened and welcomed visitors; however, there were tatami floors, so my shoes must be left outside. I took off my shoes, faced them towards the world against the stoop of the temple, then walked through the door. It was silent. Truly Zen. The temple was clean, ornate, and beautiful. I stand alone within this enormous hand-carved temple. What a neat experience that I just so happen to stumble upon. 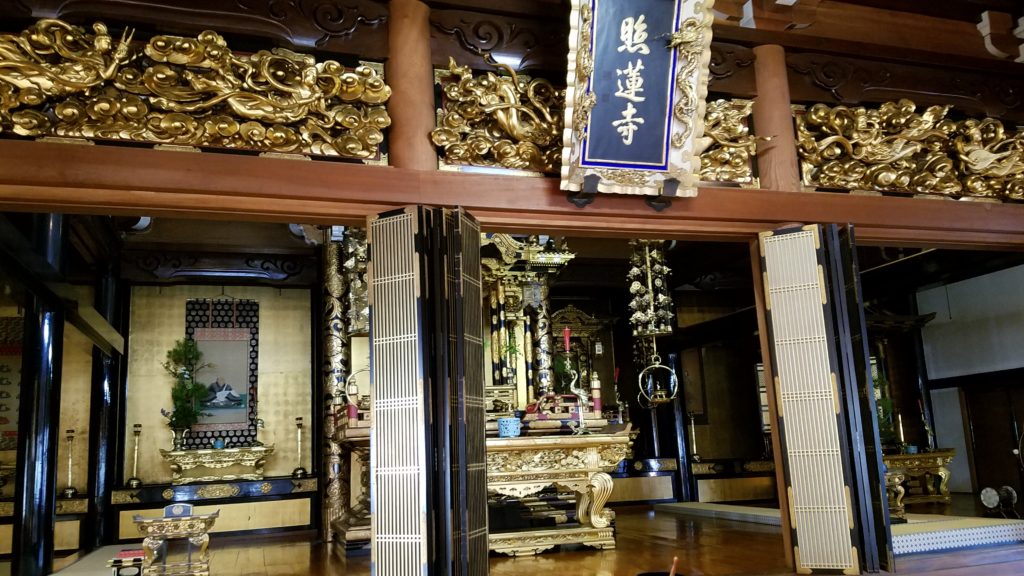 That was a little bit more of what I was expecting out of Takayama. Not to sound like a hipster that’s “too good” for the tourist hotspots, but those kinds of places always feel a little heavy handed to me. Beautiful as tourist traps may be, I don’t think they give an accurate picture of what life is really like in that area and it often seems that they’re just pandering for the business of the hordes of tourists wanting to “do what the Ancient Japanese did!” I am aware that I myself am just another bumbling, photo-taking tourist, but you know, something about the specific tourist traps just rub me the wrong way. I felt very fortunate to have stumbled upon this temple far off from the crowds to have my own isolated experience within a literally divine building.

A bit more walking later, and I decide it’s time to jump in with the crowd and see what Old Town is all about. Before that though, I actually stumbled across yet another beautiful structure!

It really is amazing what you can find if you wander off the beaten path for a while.

Speaking of beaten path, holy mother of tourism. This is probably the biggest collection of tourists I’ve seen since Disneyland. I didn’t really expect this. Old Town Takayama was filled to the brim with people. It was a little much to be honest and kind of detracted from the experience. Don’t get me wrong, the old buildings were in incredible condition and it was great to see them, but seemingly every inch of the place was populated by tourists blocking the paths to take selfies. I didn’t take any photos of the Old Town, but I’m pretty confident that if you’d like to see it, you’ll get a couple quadrillion results for it on Google Images just from the sheer amount of photographers there!

Beautiful town, suffocating tourists. I had to get out of there.

If you Google search Takayama, there is a good chance that you will see this red bridge that I stood on as the cover photo. 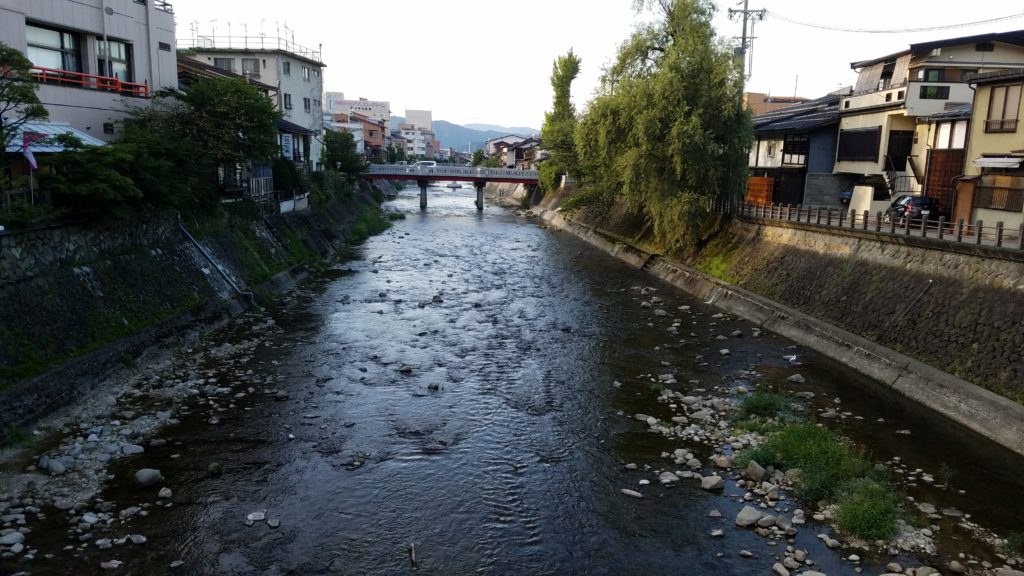 A view from said bridge.

I walked far away from Old Town and wandered the city a little bit more. I found a couple of interesting small businesses and even a little bird shop! I was getting pretty hungry, and since I knew that this was in the heartland for Japan’s rural farming industry, I wanted to try a dish that sampled a lot of the local flavors around here.

I remember from the Ramen Museum in Shin-Yokohama that each region of Japan likes to prepare its ramen in its own special way. I sought after a local ramen joint and began to do a little window shopping. After a hour or so of searching, I found a little nondescript ramen shop that served up quite the meal for only 1200 Yen (~$10).

Seared beef Nigiri Sushi, A bowl of local ramen, an iced coffee, even a little salad with some fresh local greens. There was even a sumo match on TV. Perfect. I was the only person in the shop at the time, so I pulled the cashier aside, pointed him to the meal I wanted, and within minutes… Man, it was super good. Everything was so fresh and delicious. Finding little places like this is probably the best part of the trip.

The Ramen Museum was right. This region’s ramen is very different from Tokyo’s!