Well, I can’t say that this day didn’t start off interesting. I was just enjoying my morning coffee and breakfast when suddenly I received a message from home asking me if I was having “Quite the morning.” Uhhh… uh oh, what’s going down..?

I turn on the TV and see this:

NK, I’d really appreciate it if you could just not, you know? Welp, I didn’t receive any notifications on my phone or hear any sirens. I was in Kyoto which is pretty far from the Hokkaido region where the missile passed over. State media was in a frenzy for about 2 hours – nearly every channel was on this subject.

….Then after those 2 hours, nearly nothing. The war on the Pacific Ocean was seemingly forgotten. That’s nice. Sumo wrestling was on now!

With that out of the way, it was time to check-out of Kyoto and head down to Osaka. Kyoto was fun, but I don’t feel like I got the full experience. There was just so much to explore in Kyoto, but I was located in kind of an awkward spot in town that made it tricky to visit these sites within a reasonable time frame. Oh well, maybe I’ll pop back down for a day trip later if I have some extra time.

Today, I was going to head down to Osaka, the last new destination on my trip. Originally, I was going to head down to Hiroshima after Osaka, but due to unforeseen train scheduling issues, I had to cancel my stay in Hiroshima. Instead, I’ll spend one more day in Tokyo. Honestly, this is probably a better move as most of my single night in Hiroshima would have been wasted with travel time.

I’m excited for Osaka as it’s known as “The Kitchen of Japan.” It was only a short 30-minute train ride away… oh.. this train is a little crowded.. whoops, guess I’m standing for the entire journey. Oh well!

Eventually I arrived in Osaka and wow, I really like this city. Kyoto was fun, but I couldn’t feel the same “energy” that Tokyo had. Osaka right off the bat has a fun, adventurous, and silly atmosphere that I’ve been longing for ever since leaving Tokyo. Hey, there was even another Pokemon center right inside the train station! I’ll have to check that out later. I was excited to be here!

Since my hotel was pretty far away from Osaka Station, I gave the local subways a try. It was a little confusing at first since there was a huge underground maze of different subway routes, shops, and restaurants, but I eventually tracked down my subway line. My new knowledge of how the subways worked in Japan was very helpful since I knew exactly how to find and calculate the cost of my destination while countless other new arrivals hummed-and-hawed, puzzled by the seemingly overly-complex subway ticket terminals. Don’t worry, we’re pros now!

I quickly zoomed off to my hotel and upon arrival, I was about an hour early for check-in. I dropped off my bags and decided to find some lunch. The street that I’m on is FILLED with amazing looking restaurants. Awesome.

Just a couple buildings down and I found a restaurant with a killer lunch deal.

How in the world do they sell meals like this for ~$8?!

It was a delicious sashimi assortment on a bed of rice served with a little cucumber salad, lightly flavored tofu, and of course, miso soup. Wonderful!

Lunch was through and I still had 30 minutes to spare. I headed to a little park down the street and rested for a little bit before I decided to go on a walk and see what I could find.

It didn’t take long before I stumbled upon a bunch of interesting locations.

It’s the NHK Broadcasting towers! I was watching their news broadcast just this morning. This building is akin to something like ABC studios at home. The building was super ginormous so it was difficult to even get a fraction of it in-frame.

Then, literally across the street… Whoah, a castle.

Castle in the middle of the city? Sure, I’ve got time. Let’s check it out!

The castle grounds were massive, as were the stones used to build all of the structures and walls. Each huge block of granite was about the size of a school bus and to think that the original construction of this castle was in the 1500’s. Wow.

I really love these ancient super structures right smack dab in the middle of the Japanese mega-cities. I randomly wandered through the castle grounds and crossed as many of the huge bridges I could find.

The primary bridge to the castle. Complete with weirdos taking dumb photos of themselves.

The main castle tower. Lots and LOTS of tourists in this area.

Soon after walking around the castle, I discovered the central tower. It was a gorgeous building and it seemed to have a line growing out of it – does this mean I can go inside?

Yes! You can go inside of the main building since it has been turned into a multi-story museum. Awesome! I bought a 600 Yen ticket and began my walk up the ancient granite stairs. Just then, I noticed a HUGE line out the door that practically wrapped around the building. Oh no… man.. I don’t want to wait in this… wait.. There’s a sign… It reads “Left side, elevator for 5F, right side for stairs.” This entire line is because people are too lazy to walk up stairs? Alright works for me.

I zipped right into the building via the nearly empty “stairs” line. Admittedly, the stairs were pretty steep, but the flights were very short. Why those people were waiting in an hour long line just for the elevator? I’ll never know.

Anyways, the inside of the main tower was an awesome showcase of genuine ancient armors, paintings, scrolls, and tapestries. There were a couple floors that did not allow photos, presumably to protect the ancient works from strong UV light coming from camera flashes, but there were a few things that I was allowed to take photos of. 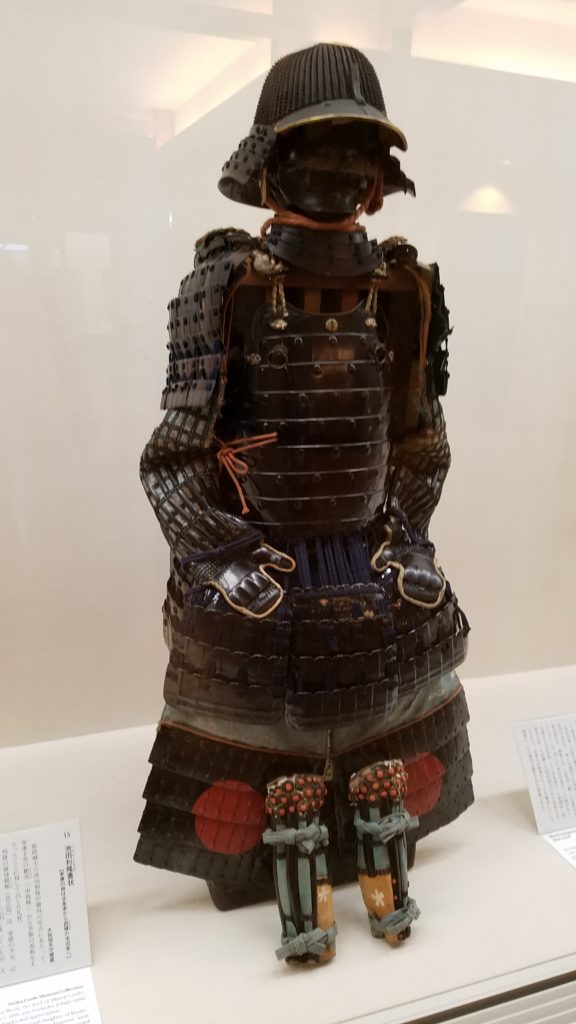 There were lots and lots of these ancient armor sets. All of them looked so cool.

Scale model of the castle grounds. There were lots of these building models and even large models of ancient battles!

Here are a couple of views atop the main tower. Beautiful.

Front courtyard. The building on the left was being renovated.

Hey look! The massive NHK tower we saw before!

Lots of large fields and gardens.

Ornate golden statues on every corner.

Here’s a short video showing my view. There was a magic show going down in the courtyard below so if you listen closely, you can hear the wonderfully appropriate soundtrack to 2001: A Space Odyssey.

A peaceful little stream away from the tourists.

A view from slightly farther away. It’s way less crowded down here.

Overall, I think that was a fun and spontaneous trip. There were a suffocating amount of tourists that were being loud and annoying, but some of the quieter parts of the castle were lovely. I really liked the view atop the main tower.

Okay, back to the hotel for a little bit so I can rest up for my next big night walk.

About 2 miles away lies Dotonbori, Osaka’s famous and iconic strip of street food vendors and entertainment hotspots. I couldn’t wait! Nightfall arrived and soon I was on my way. Walking through Japan at night is an interesting sensation. You can walk through the darkest, shadiest looking allies and yet.. you will be completely safe. You will frequently (I mean, literally multiple times every day) see what look like 2nd and 3rd grade school children by themselves walking around during the day and riding on the trains and subways. I love experiencing such a safe and fearless environment.

Eventually… I see… IT.

The iconic Glico running man. Just had to get a photo with it.

Dotonbori was AMAZING. It is an endless strip of wonderful street food, beer on every corner, and lots and lots of crazy sights. Love it! Time to get some street food.

First up, the food that Dotonbori is famous for: Takoyaki. I walked up to the little street stall where cooks were skillfully pouring batter and flipping the little orbs of deliciousness inside of massive pockmarked cast iron pans. The were also selling charcoal grilled chicken skewers. Yeah buddy, one of each please!

First off, a word of warning to those who try Takoyaki. They are SUPER HOT and will not cool off in your mouth. My first bite was scalding and painful…. but oh my god so good. It was hard to resist hurting myself again just for another bite. Atop the Takoyaki was a bunch of interesting wiggly thin fish flakes (bonito) that were mostly for texture. Takoyaki is a little puff-pastry filled with fresh octopus meat and slathered in delicious sauces. Normally, I’m not the biggest fan of octopus, but man these little balls of goodness were to die for.

Speaking of chicken, a friendly vendor behind me was barking out to the streets advertising his Japanese-style fried chicken. Yeah buddy, let’s go.

I pick up a three-wing pack and oh man, they just beat America at its own game. Sticky sweet and salty, super crispy batter, wonderful taste and texture. These wings were the bomb. Subtle flavors rule.

That fried chicken vendor was awesome too. After my meal, my hands were extremely sticky and greasy. I kid you not, the moment I stood up and turned around to ask for more napkins, he is directly behind me with napkins and a wet towel. Friggen mind reader. I say this often, but man I love Japan.

Hey there you are! I knew you were in Osaka!

Next up, Gyoza. Japanese fried dumplings. Also stupid delicious. I love the food here so much, but I decided to call it quits after that meal since I had a 2 mile walk back to my hotel! I’ll be back for more soon, don’t worry.

A walk down the main street

Lots of shops have elaborate billboards