So it’s time to head back up to Tokyo for my final hotel stay. Originally, I wanted to go down to Hiroshima for a night just to see the area and the peace museum, but due to some unforeseen train scheduling issues, I elected to refund my Hiroshima stay and buy one more night in Tokyo. As much as I wanted to see Hiroshima, this was honestly the best move as most of my time there would be eaten up traveling anyways and an extra day in Tokyo sounds like a fair trade to me!

Since today was a travel day, not too many crazy things happened today. I ate a quick breakfast, packed up all my stuff, then hit the subways toward Osaka Station. You know… there was something at Osaka Station that I really wanted to check out… hm…. 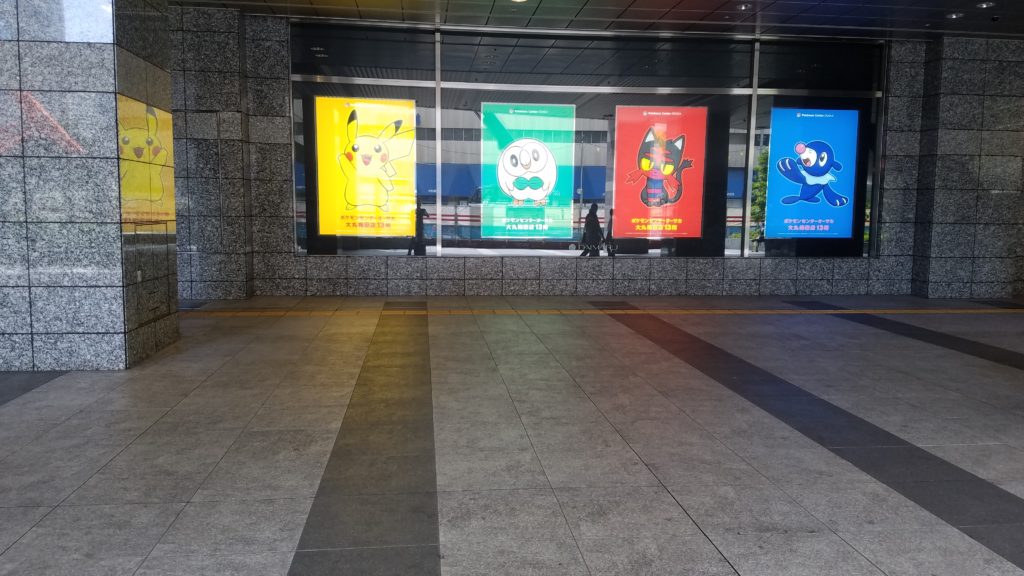 Just gonna’ pick up some essentials… you know…? Need anything from the Pokemon Center?

Pokemon Center Osaka. It’s not a “mega” center, but it was still packed with all sorts of Pokemon goodies. I love this place.

This will be the only time I will say this unironically: かわい!!

Fans of Indigo League will like this: Charizard is known as “Lizardon” down here. You can also see that they like using their more literal “Pocket Monsters” branding.

Save me from myself.

Okay, train gets here soon, better start heading to the platforms. With my previous experience reserving train seats down at Takayama, I thought it might be a good idea to pop in a reserve some seats for the Shinkansen, especially since this will be a nearly 3-hour ride. I walk into the ticket office, show my pass, and request a reserved seat on Hikari 522. Sold out. What? Uh oh… I hope this train isn’t packed.

I go up to the station platform and wait in the unreserved area. Oh man, there are quite a few people here. Please don’t make me stand in a train for 3 hours. The Shinkansen arrives, the doors open, annnnnddd… the cars are empty. I find a seat no problem. Nice.

Well, nice until a few stops later, a vehemently upset infant decides that it would like to scream and cry for the remaining two hours of the trip. Goodie. I popped in some earbuds, then just enjoyed the view of Japan passing by at 160 Km/H. I even ordered a special on-train sushi bento! It was so beautifully wrapped – just like a Christmas present of Sushi. Each piece was individually wrapped in a large leaf. This was just “some food you buy on a train” and it was fantastic! How does Japan do it?

Fancy leaf-wrapped sushi bento on a Shinkansen! Can you think of anything more Japanese?

Eventually, I’m back at Tokyo Station.

I find the green Yamanote line and begin to head down towards Nippori. It was funny, the first stop from Tokyo Station was “Kanda.” The first place I stayed on this trip. Is it possible to feel “nostalgic” over something that happened like… 2 weeks ago? It feels like I stayed in Kanda years ago and was just coming back. “Kanda, Kanda-des,” says the announcer. It felt wrong not to get off.

Next we zoom past Akihabara. It’s always fun to stop in Akiba because of the people that get on and off there. They look just like the kind of people you’d expect to get off at Akihabara. If you see somebody playing with a 3DS on the train, there’s a sure-fire bet that they will be departing at Akihabara station. Mixed in with that are glitzed up girls with bags full of UFO catcher prizes and salary men about to start their evening shift. Soon we depart, and from the windows of the train, you see the bright and in-your-face insanity of the Electric Town of Everything pass by.

Alright, finally, Nippori Station. My full day of train rides has ended. Even though it was a long day of traveling, I still can’t get over how awesome the train systems are here. While the Shinkansens would be pretty expensive without the rail pass, if you were just an average citizen of Tokyo, you can essentially board a train to anywhere and be there in only a few moments for less than $2. So amazing.

This hotel that I’m checking in to is right along the train tracks, so I only have to walk a few steps before I arrive. This place is fancy and the building looks like it’s brand new. So new, in fact, that if you were to look up this location on Google Maps, there is just a dirt plot where this hotel currently stands! Sweet. I get checked-in and head up to my room. First thing I see on my bed: 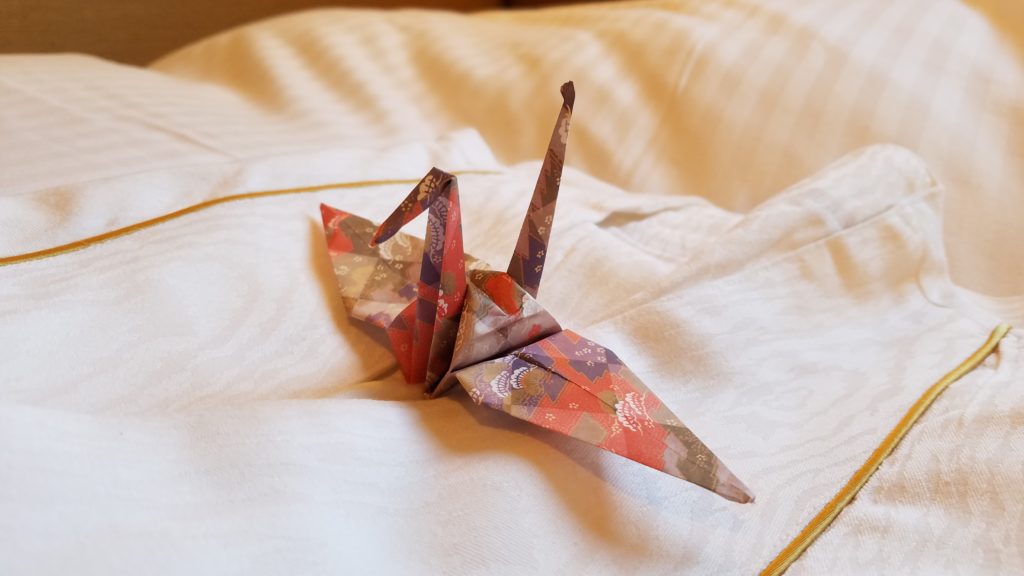 Instead of a bedside bible, it’s a bedside manga about the hotel chain. I love Japan. 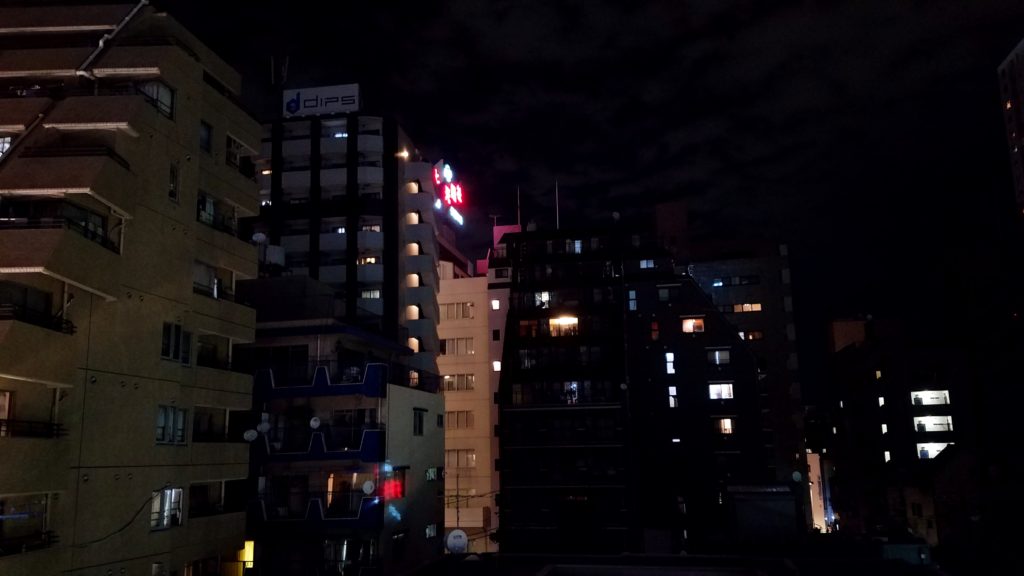 View’s not half bad either.

There’s even a BIG ultra-HD TV in here. Sweet, now I can watch 12 basic cable channels of nonsense that I don’t understand IN SUPER HD! And finally! A soft bed! YES!

Alright, this hotel is comfy. Let’s go get dinner. I took a walk around town and it looks like there is a bunch of cool places to eat. I love the crazy electric sign bombardment through all the alleyways trying to entice people to visit their restaurant instead of the billions of others. Past the train tracks a bit, I found an Izakaya serving fresh fish and more tasty Yakitori skewers. Sadly, no photos this time since it was a bit too crowded for that. I ordered some delicious Shashimi, a multitude of skewers, and even tried out grilled gizzards. Of what animal? Chicken…? I hope..? Chewy!

Dinner was good. I went down to the local 7/11 to pick up breakfast for tomorrow. On my walk back, I reflected on my trip so far. I can’t believe it’s almost over already. It feels like it has gone by so fast, but at the same time, it feels like I’ve been in Japan for years. I’ve learned so much about how this country works, and yet, I still know very little.
I look forward to my last couple of days here. What else will Tokyo show me?