Last morning in Osaka. I want to pay one last visit to my new favorite coffee spot in Osaka. The owner is just so friendly and the coffee is to die for.

Abbie pointed out that she saw some people last time with jelly on their toast and was wondering if I could ask the owner for jelly on hers too. Once we were seated, we ordered the usual and I attempted to ask for jelly. I did not know what the Japanese referred to “jelly” as, so I attempted the literal translation first, ゼリー (Zeh-ree). ゼリー usually refers to a different kind of food project, most often than not, it’s just a little sweet treat often given to kids. It was not “fruit spread” which we were looking for. After a bit of back-and-forth with charades and useless Google Translate just giving me katakana translations (AKA, just turning my American English into English with a Japanese accent), Abbie had the great idea to simply show him a picture. “Ah! Strawberry Jam-u.” Yes, yes! We got it!

I explained that in some parts of the US, we call Strawberry Jam, “Jelly.” He was really amused by this fact and came back with the whole jar of strawberry jam, asking which language “Strawberry Jam” was if it wasn’t “English.” I reassured him that it was in fact still English, we just had many different words for “jam” and I didn’t know which one the Japanese would use. That was funny. I’ve never had any sort of interaction like that before and it was fun to explain the nuances of our language.

When we were finished, the owner noticed that we left our suitcases outside. He asked if we were going back to America, and I explained that we were leaving for Tokyo and would leave Japan on April 2nd. We also asked for each other’s names and he wondered what my relation to Abbie was. “Little sister!” I said. “One more time, what was your names?” Asked the owner. “Aidan and Abbie.” I said. “I will remember them.”

“Sayonara” we all said as we departed. I’m saving the coordinates of this place since it’s not on Google Maps. What a great find.

The place to go

After breakfast, we took one last walk through the morning market shopping arcade and made our way to the train station. We needed to take a quick ride on the local loop line towards Osaka Station, then transfer to Shin-Osaka Station to get to the Shinkansen tracks.

The local loop should have taken us all the way to Osaka station, but at one stop, the train suddenly went out of service. Thanks to the old dude with the cool glasses and hat that gave us the heads up because we wouldn’t have noticed otherwise.

A couple more trains later and we were on the Shinkansen tracks. This time, we checked-in with the office and got a seat reservation. These are free with your rail pass and will guarantee you a seat. Since this is one of the most congested lines for the Shinkansen and we were going to be traveling for over 2 and a half hours, I think it was a great choice. Standing-room only would have been such a drag.

With snacks in hand, we waited at the station for about twenty minutes before setting off towards Tokyo. Bye, Osaka. See you again next time!

Visibility was pretty poor this time around, so sadly, there wasn’t really any chance to see Fuji-san. Oh well.

Most of the journey was pretty uneventful, which is nice when you’re using public transportation. Abbie and I just stared out the window and watched Japan go by at 320 KM/H.

After a very long train journey, we were here, back in Toky—-Oh my GOD it’s so cold! That’s something funny about the Shinkansens – You get to rapidly travel between climate zones. A nice day in Osaka might be a cold and rainy day in Tokyo. 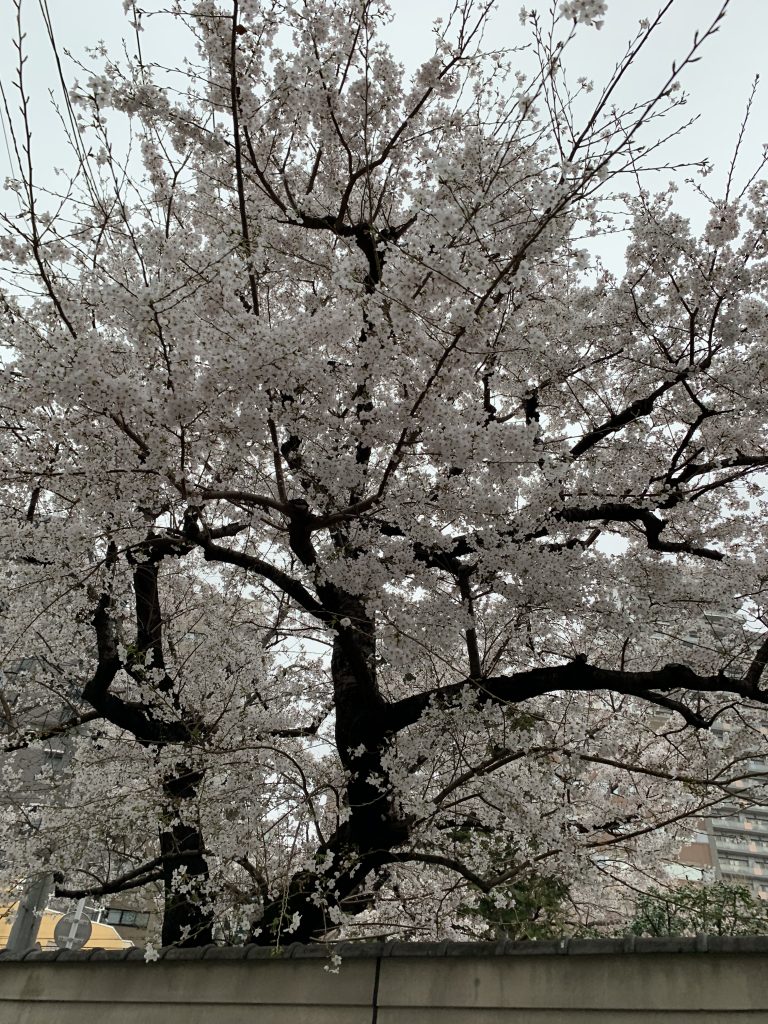 Abbie and I were really hungry after our train ride though. Strawberry Jam toast can only get you so far. How about… sashimi? 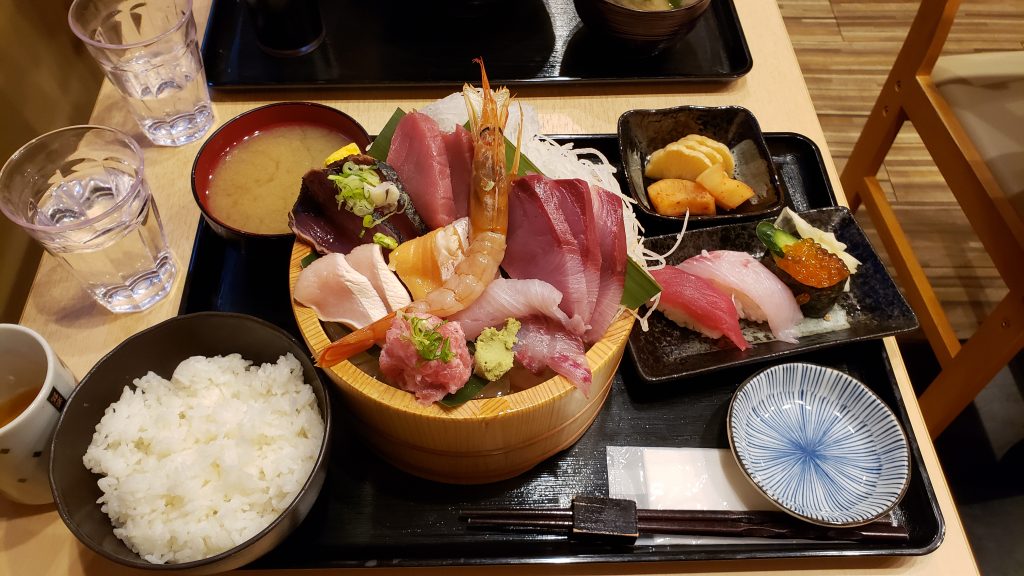 Sashimi sounds nice. This is what a $12 meal looks like, by the way.

Abbie got a slightly different meal

Everything was delicious, but my favorite parts of the meal were the ones that involved the Maguro (tuna). The Japanese take their tuna very seriously and it shows. It was incredibly good.

Let’s get back to the hotel and out of this cold!

This trashcan gets me pumped