Abbie and I both knew what the main event was for today. There was no getting around the fact that we had to sacrifice another chunk of our last remaining days here in Tokyo at SkyTree, but the prospect of eating Kirby’s face was just too good to give up. We had quite a bit of time before our surprise reservation at the Kirby Cafe was available, so we needed something to do. How about we walk the Imperial Castle Grounds and see the gardens. I bet they’re full of blooming cherry trees and people participating in Hanami. Hanami (literally translated to “flower viewing”), is the springtime festival in Japan where families and friends will picnic underneath the blooming cherry trees and view the Sakura flowers that adorn them.

Yeah, last time I was at the castle grounds, it was lovely. Just walk right in and have a good time in the vast open spaces.

As you will soon see, a couple other people had the same idea.

But before we get into all that, let’s find some breakfast! We set out towards Tokyo station and left via the grandiose east exit. This station is remarkable. 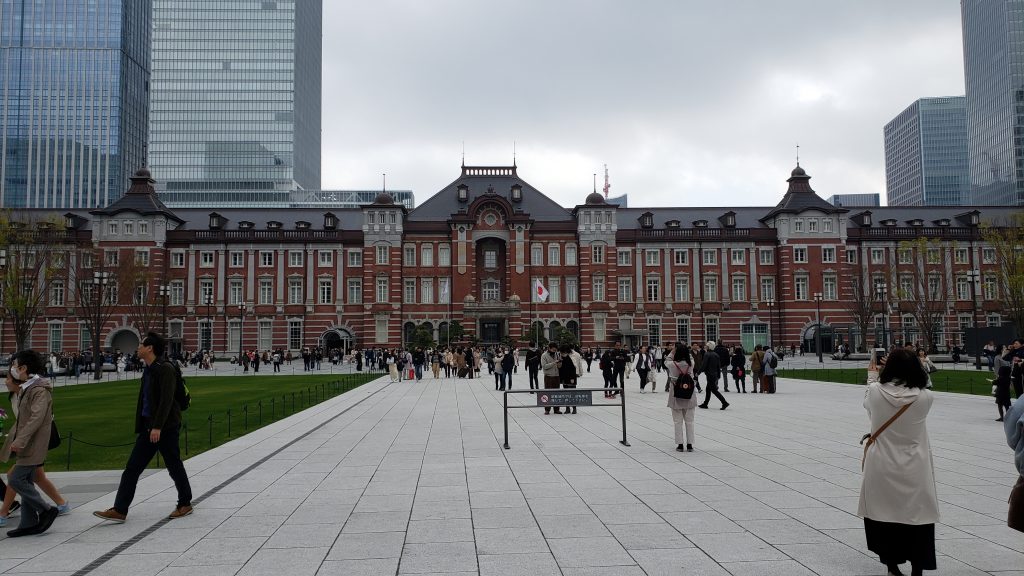 As much as my camera could capture. This place is huge!

Alright, let’s scope out some breakfast here. We casually strolled around Tokyo, both above and below ground, and eventually found a foodcourt under a massive shopping mall. This place was serving “California-style” bagels (is that a thing?). All around the store were California-themed works of art and the state flag. Hmmm.. Does this feel like home? No, but the bagels and locks were really good.

Pretty expensive for bagels and coffee. At least it was good!

Breakfast obtained. Off to the Imperial Gardens.

Crossing over a bridge to enter the Imperial Grounds

There is just an INSANE amount of people here. I’m willing to bet that there is over 10,000 people waiting in line, and that is not hyperbole. WOW. Security was really on the up-and-up as well. Bag screenings, metal detectors, K9 units. Man, last time I was here, it was an easy stroll through the front gates. I suppose it’s the last day of the Heisei era and it’s Hanami, so those two factors are likely contributing to the crowds, but wow I really didn’t expect this. Let’s find our way to the gardens ASAP since there is lots of space there.

After the massive initial crowds, the path split. One path continued forward while the other went up a steep hill. This steep hill lead to the imperial gardens, of course, but if you’re ever in a crowded situation and have a choice on where to go next, pick the path of greatest resistance. It filters out most of the people.

Once we crested the hill though, what followed was a beautiful walk through the blooming Imperial Gardens.

Abbie next to a flowering tree

The flowers smell like… nothing. They sure are pretty, though.

Sitting on a bench and taking it all in.

Vast, ancient gardens contrasted with ever more Tokyo construction in the background

All of the paths were covered in blossom petals

More than you could ever count 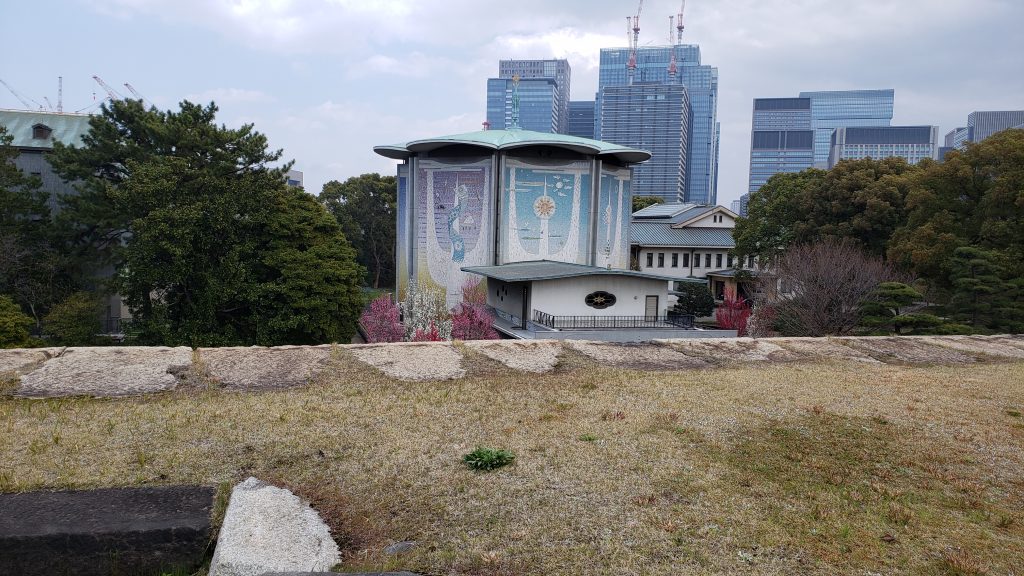 Atop the battlement looking down at the observatory 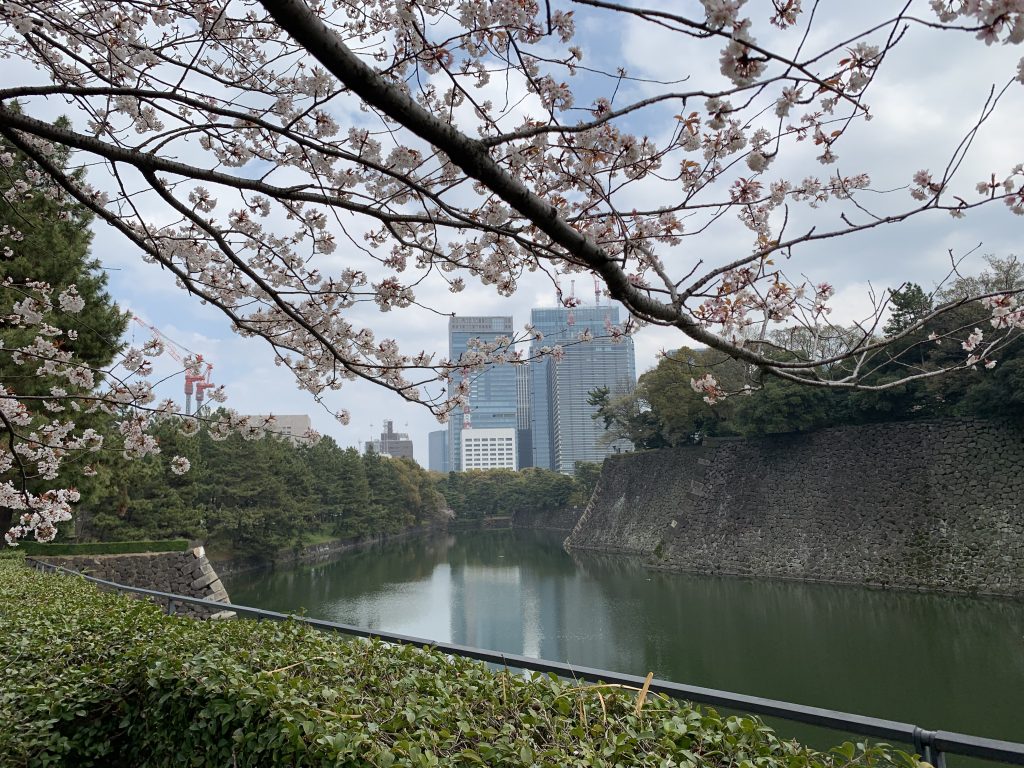 Lots of other trees were in bloom, too 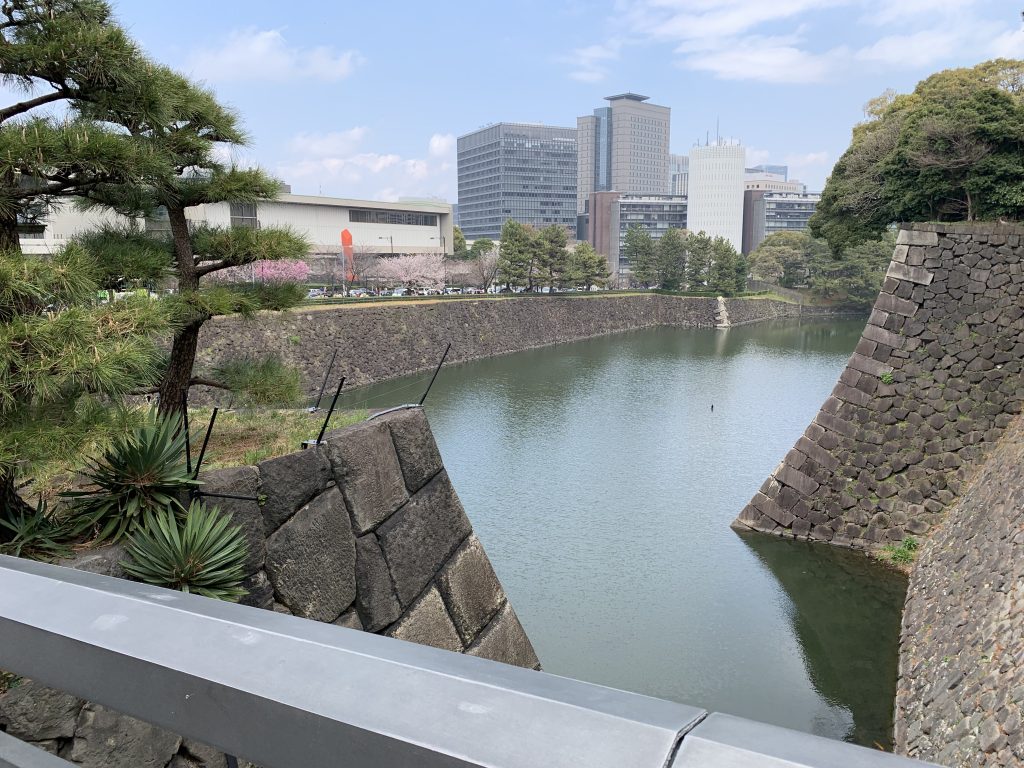 I think you get the idea. Much like New York’s Central park, this vast preserved space is a green haven in a concrete mega jungle. Difference being that these two places differ in age by a few hundred years and as far as I know, central park doesn’t have a moat or ancient castles. It really was shaping up to be a lovely day though, as the weather had warmed up a bit. We walked for quite a bit already and were becoming a little fatigued. Let’s head back to the hotel for an hour and wait for our special dinner.

Soon, we find ourselves at the SkyTree yet again, but this time, with good reason.

We met with another American couple who had also managed to snag some last second tickets. Since we were in the same time slot, I wonder if we saw the opening at the exact same time. A party of four must of canceled before us. We chat for a little bit before finally… Yes. We’re in. We made it. 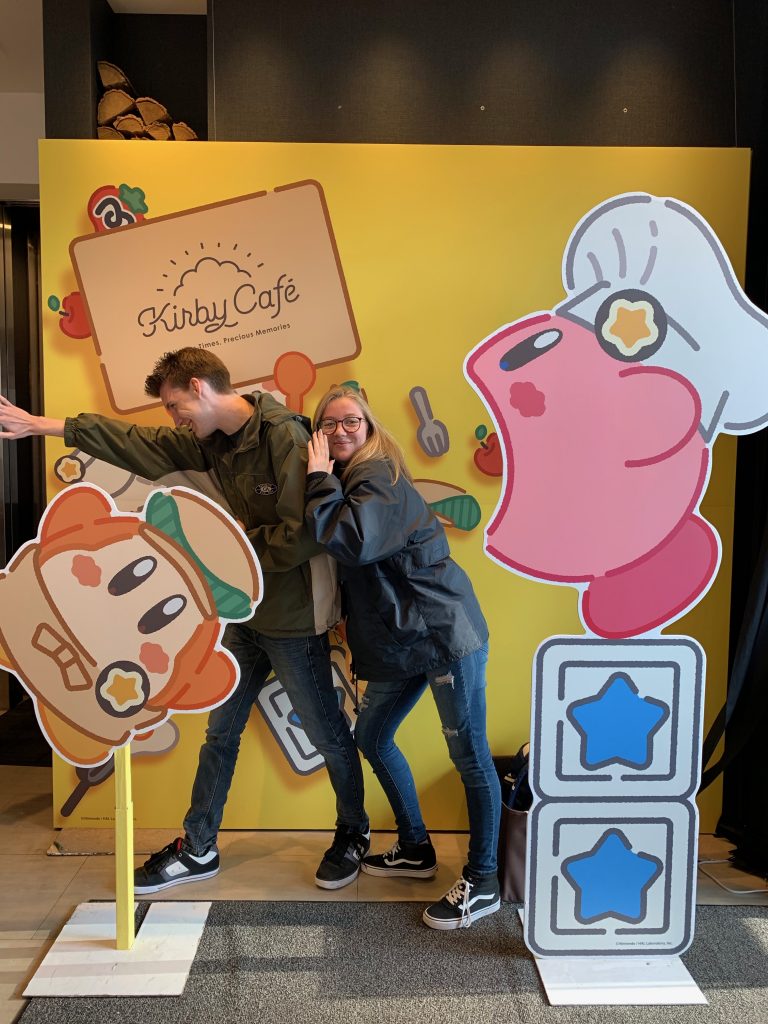 Strike a pose! The server takes your photo right as you enter. 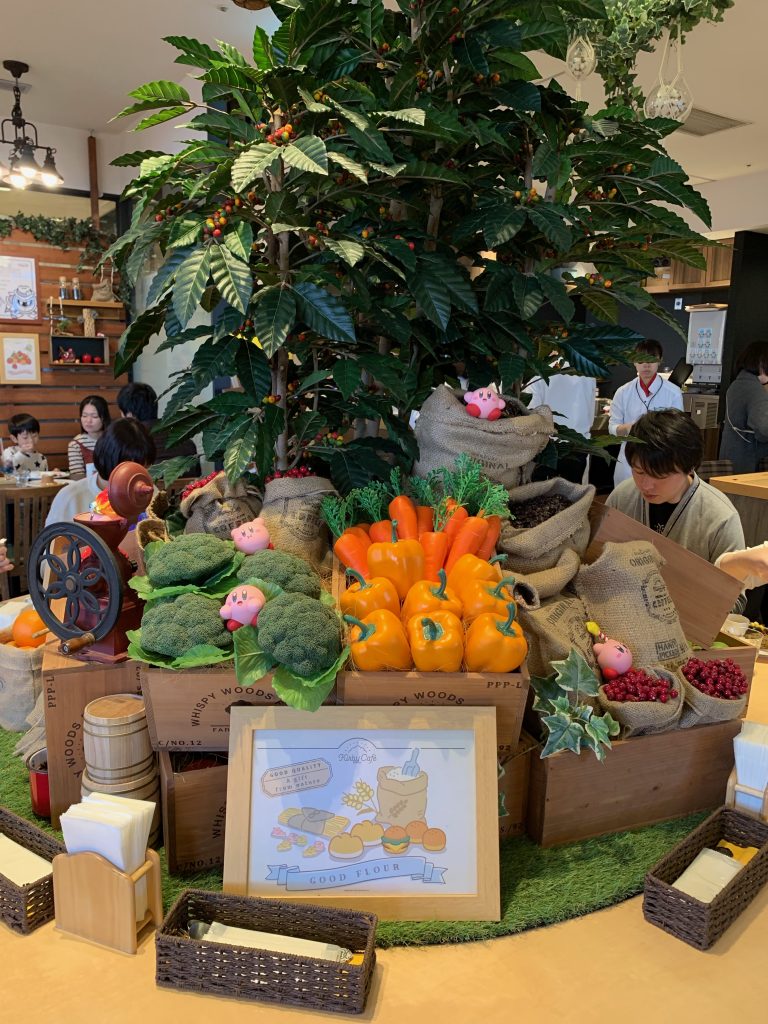 The entire restaurant is decorated with Kirby themes 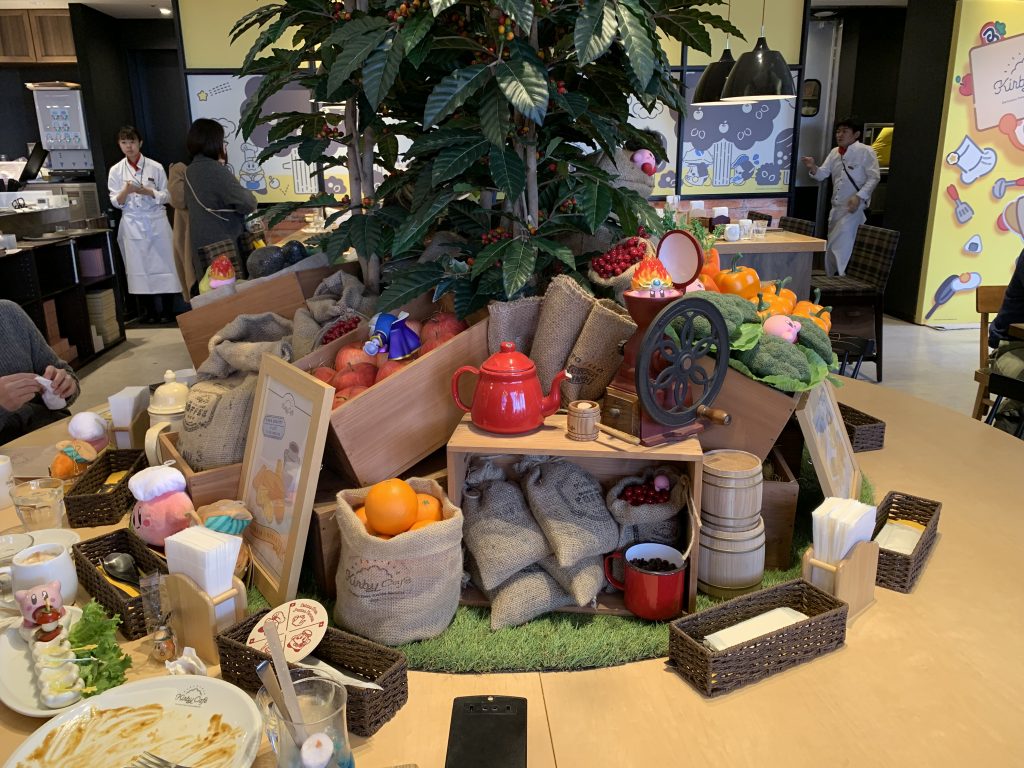 A fiery Kirby hides inside of the coffee grinder 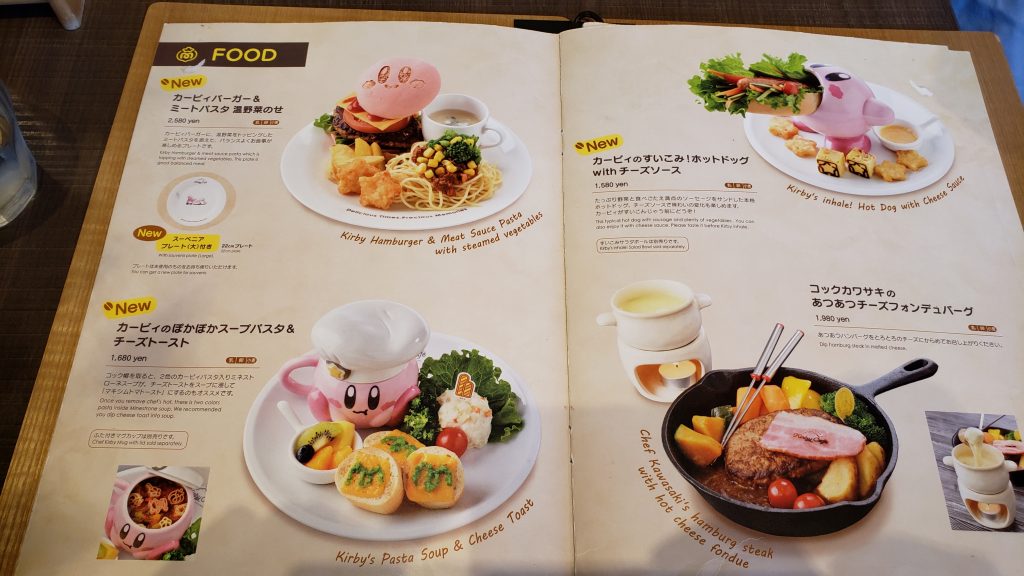 Even the menus are great.

It pained us to drink him. Kirby didn’t seem to like it. 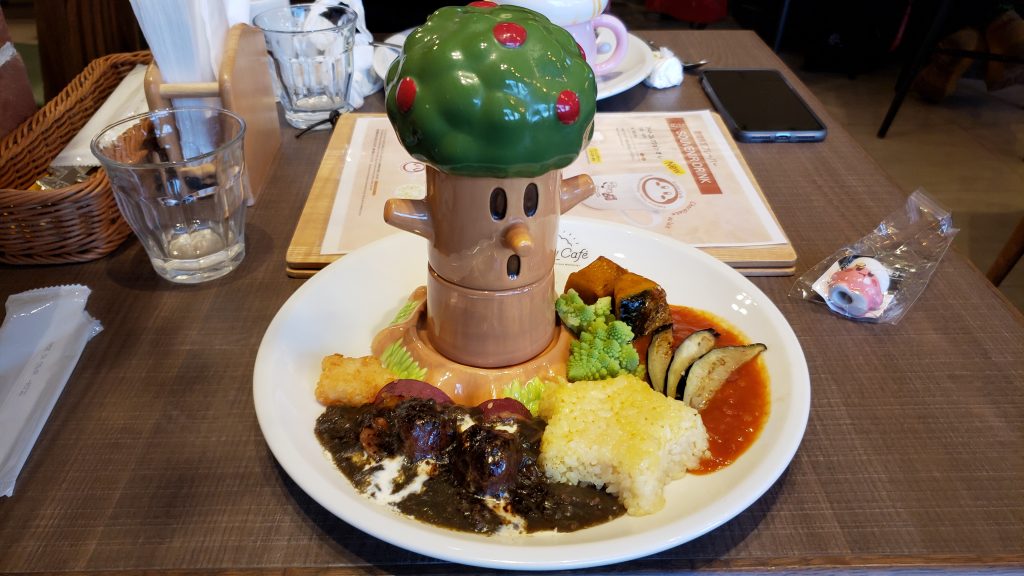 My dish. A vegetable curry, one side is tomato-based while the other is coffee based. Served with star rice pilaf, fried veggies, and inside Whispy Woods (tree) is potato salad, and cheese fondue.

You would expect a “theme-cafe” to have rather lack-luster food, since, you know… they usually do. But this was great. The food tasted wonderful and the flavors were super interesting.

We had made it. Abbie and I have wanted to go here ever since we heard about it in 2016, but never got the chance to. There was the very real possibility of missing it yet again, but through a stroke of sheer luck, we had made it. I can die happy now. You can all close down shop now, I’ve made the visit. 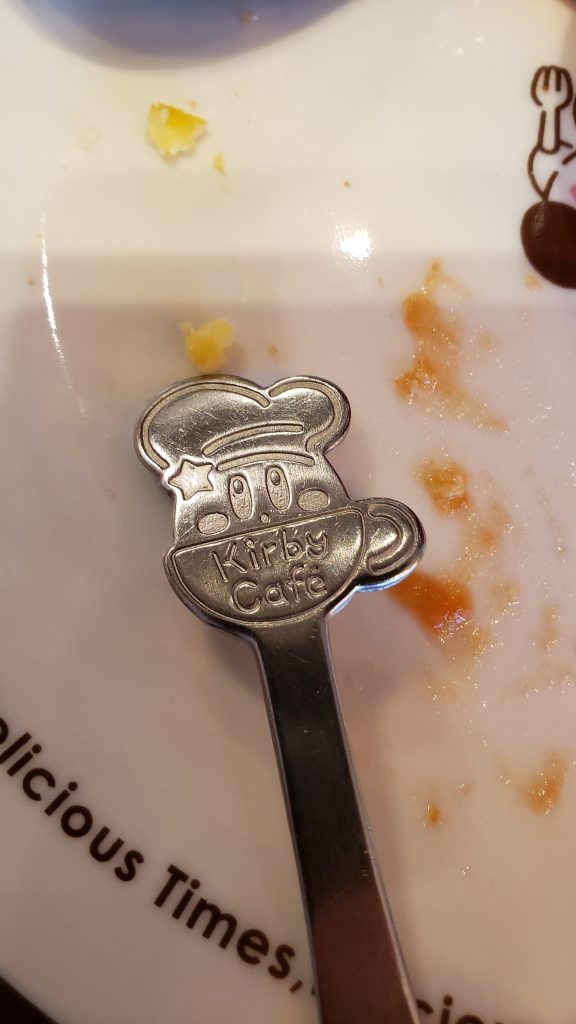 A Kirby Cafe spoon lays on the aftermath of our desert

Expensive? Yes, very. Unforgettable experience? Totally. I say: worth it. The price of the meal was high, but as a consolidation, you’re given lots of stuff with your meal to take home. We walked out with a ceramic mug, a ceramic plate, two ceramic figurines, and even a little coaster. After dinner, you’re lead into the “exclusive” gift-shop. This shop was separate from the Kirby Cafe store we visited yesterday and had a few things that were exclusive to this area. This meant that we were going to spend even more money on expensive Kirby stuff, but I decided to pick up a few gatcha’s while Abbie got a shirt and a stuffed Kirby Chef. This place was so great. Let’s leave now before we bankrupt ourselves on Kirby memorabilia.

By now, it was only about 5PM. Still plenty of time to enjoy the night. Wanna hit up Akihabra again and play some arcade games? YEAH! 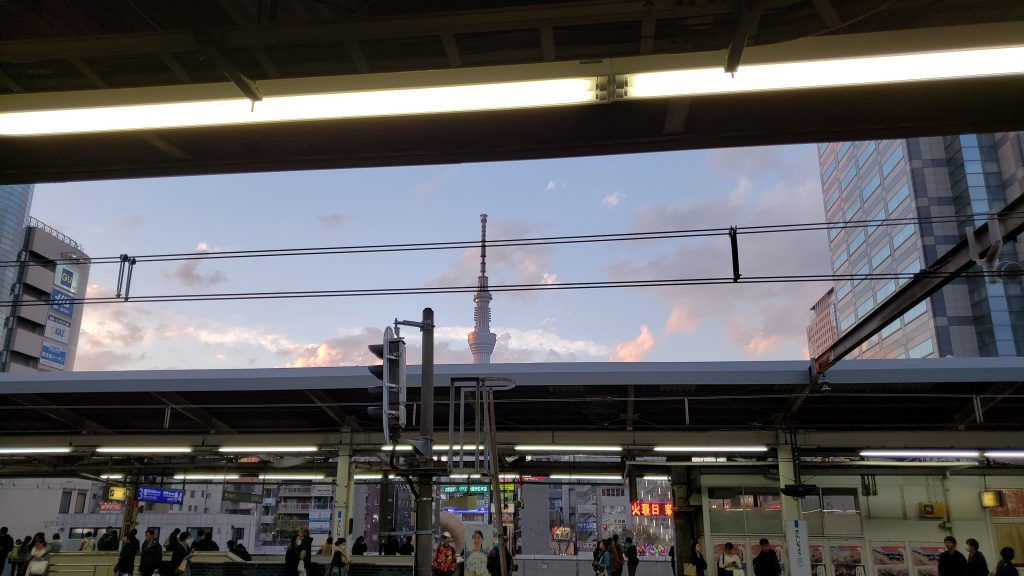 SkyTree from the train station at sunset. Seriously looks like some sort of fake fantasy backdrop.

This train took us right to a JR station where we could transfer over to a line that took us straight to Akiba. It’s funny – we were just now getting used to the drastic time change, and it was already just about time to go back home. Oh well, at least we’ll see a little bit of this crazy city at night. 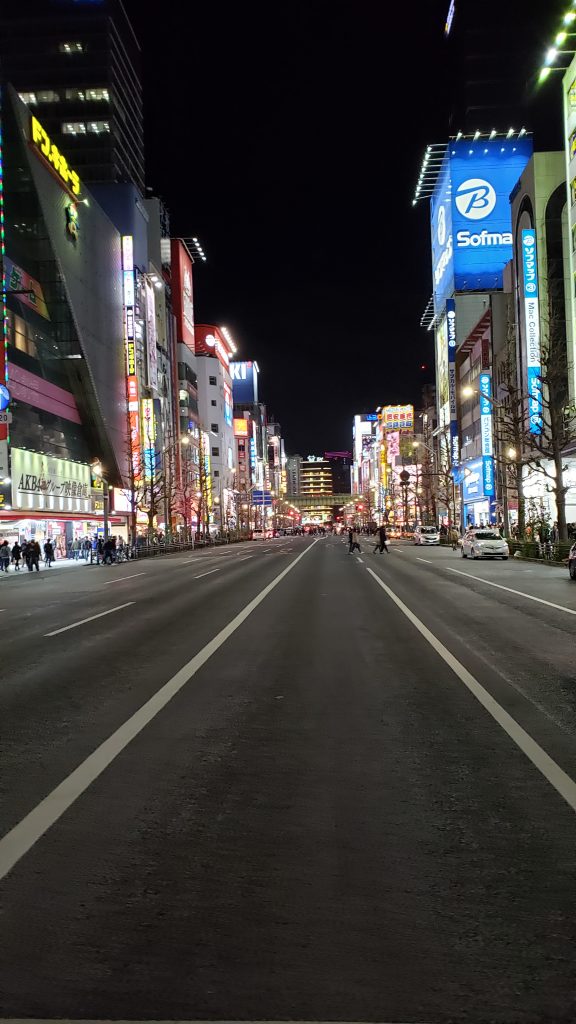 Crazier at night than during the day. 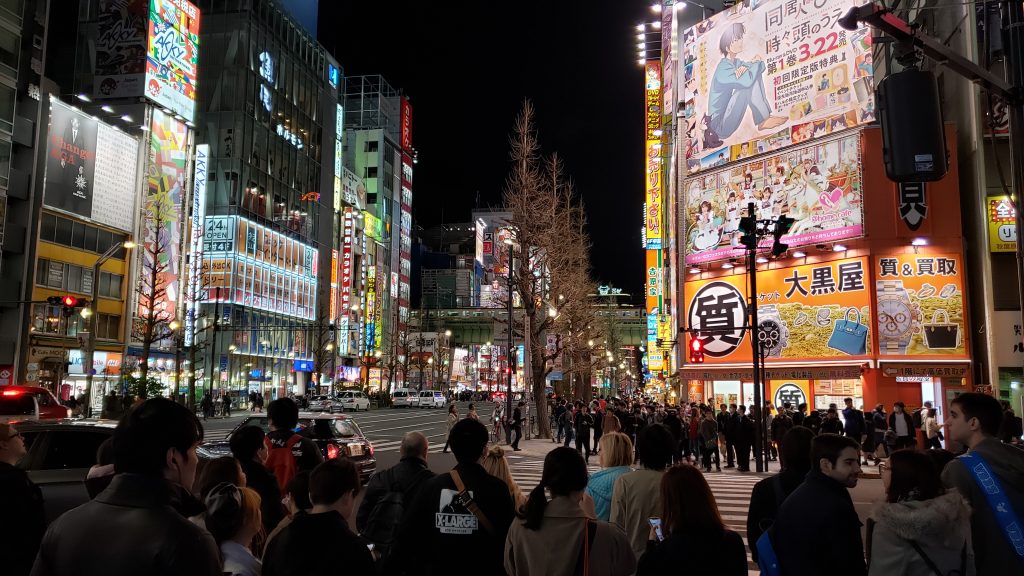 Abbie hasn’t visited a proper Manga store yet. Well, this is the place to see a few (more like a billion of them). Manga and Anime isn’t my forte at all, so I was just as confused as she was. It really is all a spectacle though. You’re bombarded with art and sound from every angle. I didn’t know there was that many ways to draw skinny girls with colorful hair. Truthfully, it was hard to find any differences between the thousands of manga that all looked the same. I need to come here with someone that actually reads and watches this stuff because I’m in over my head. I did manage to find another volume of Kobayashi’s Dragon Maid, basically, the only thing that I recognize. Abbie had become quite the fan of the anime over our vacation, so it was neat to point out that most animes that you see start out as Mangas sold in these stores.

Abbie and I picked out one manga each and we departed from the shop. Alright, I think that was enough of that for forever.

First, we visited one of the arcades known for a few floors dedicated to vintage arcade titles, the “HEY” Arcade. That’s a little more up my alley. There was an entire floor dedicated to Japanese “Shoot-em ups” (AKA, Shmups). Essentially, take the play field and cover it with more projectiles than any sane person can reasonably process. That basically sums up bullet hell games. I found a Fantasy Zone cabinet – that was a little more my speed (also it has an awesome soundtrack). I wish they had one of the rare FZII cabinets, but this will do for now.

I can’t say that I’m the best at these kind of games (see: the worst), but they’re still fun none-the-less. 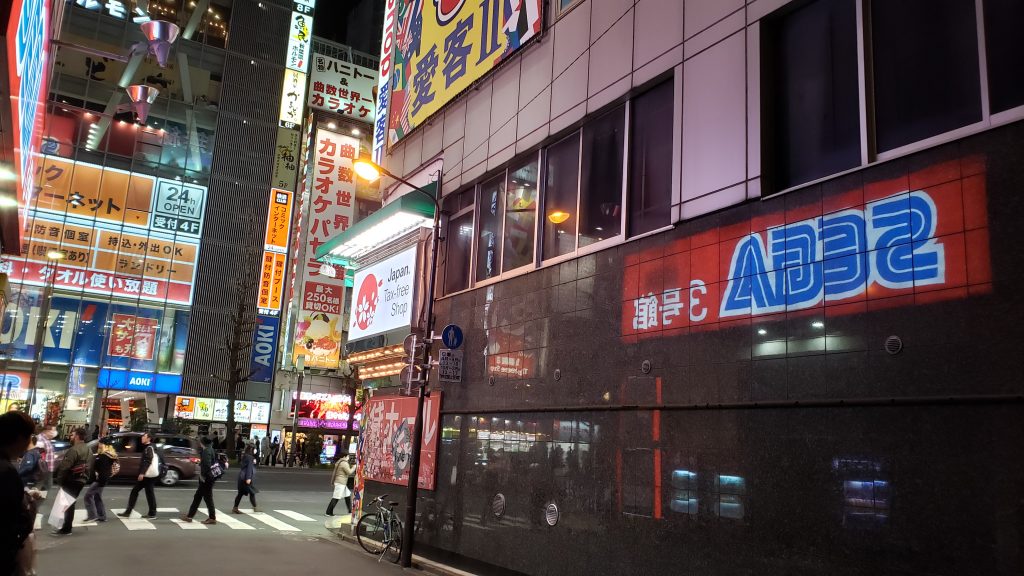 Resting in an ally with the Sega Arcade sign reflecting in the marble wall in front of us.

We wandered back to Club Sega to see if the Table-flip game was alive again. Sadly, it was not. There was, however, Densha De Go, a super realistic train simulation cabinet that let you operate trains around this area. We had to give it a try.

Hey JR, I practiced my point-safety. Hit me up if you’re looking for new conductors.

I had to redeem myself.