Okay, this is going to be a fast paced-post with not a ton of writing since we need to get out of here quickly this morning and move on towards our next hotel!

Today, we were going to checkout one of the many premier shopping districts in Tokyo, Ikebukuro. In the center of Ikebukuro lies a MASSIVE shopping complex known as “Sunshine City.” Think of it as not just a “super-mall,” but a hyper-mega-supreme mall. The “City” in Sunshine City is not just for a colorful name.

Though, the name is literally colorful.

We set out to Tokyo station, this time a bit later in the morning in search of a meal. It was about 7:30AM this time, so surely more things had to be open. Yes, more shops were indeed open, but it almost seemed like overnight, each restaurant we were interested in moved their opening hours up ever so slightly – like they were messing with us or something. Oh well, let’s check Ikebukuro for something to eat when we get there.

A short trip on the Yamanote line later and we arrived. Ikebukuro is a very upscale, rich shopping district. If you’ve ever wanted to move beyond the cityscape hubworld in the video game Splatoon, this is probably what you’d see.

Do you think they know anything about Mahjong?

After walking around the train tracks (and noticing that the first few buds of the cherry trees were blossoming!), and a little bit of strolling around town, we arrived at Sunshine City. This massive complex houses hundreds of shops and restaurants. There’s even hotels, an aquarium, a planetarium, VR experiences, a MASSIVE display and water-feature, and most importantly, the Pokemon Mega Center.

This place is HUGE.

But before we dive into the shops, we were starving and needed to eat something. Last time I was here, I visited a KILLER sushi joint. Let’s find that!

Abbie ordered the sashimi bowl while I got the same sushi assortment as I did last time.

There simply is no use in comparing Japanese sushi to American Sushi. They are not even in the same universe. You’ve never tasted anything more tender and delicious. Especially the Salmon and the Eel – to die for.

On to the super fun stuff:

This place makes me happy

Abbie hangs out with her boi 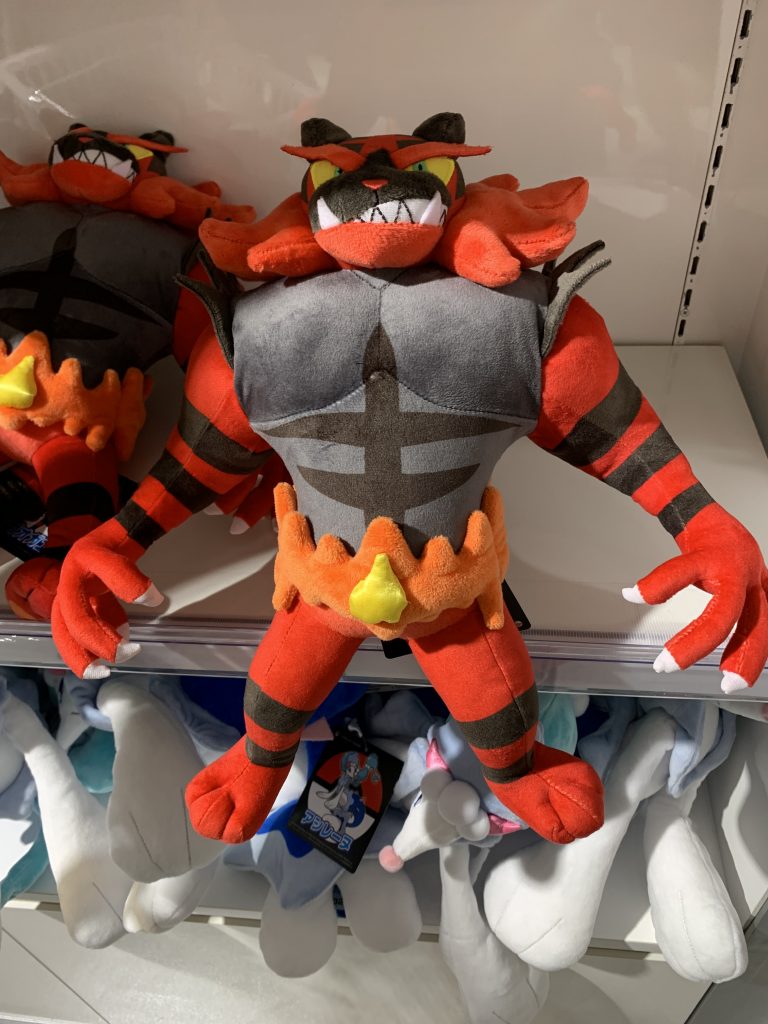 Abbie look out you’re about to get hit by an Aura Sphere oh god she has airpods in oh god she can’t hear us.

Outside of the mall is a little rooftop relaxation area with a beautiful little miniature town display.

We even found a Toys R Us. Think of what a Japanese Toys R Us would be like: Yep, you’re exactly right. 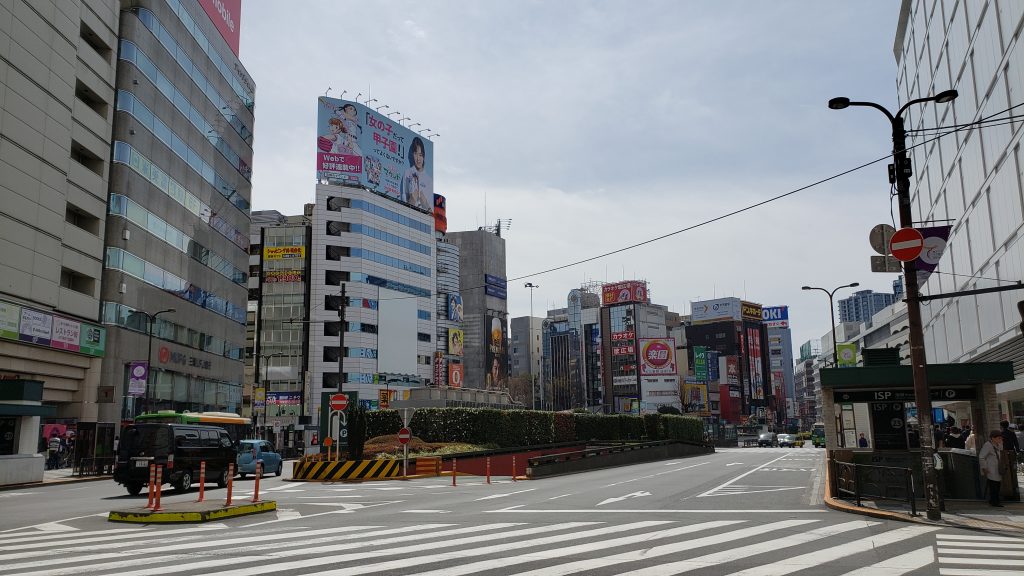 コーヒーとココア! A wonderful Latte and iced cocoa desert for our break.

Abbie was in shopping heaven, so I let her shop around a little while I rested my feet. She ended up buying a cute, Japanese-style dress, but she had a different goal in mind. See, in Japan, English is often used as a stylistic choice. It’s seen as fashionable and trendy, and much like tacky foreign language tattoos you see in the states, their translations are often nonsensical. Abbie wanted to find an article of clothing with the best English nonsense that she could find. We found many examples of this, but this shirt was one of our favorites.

Okay, that was a TON of walking. Let’s head back to the hotel. Off we go on the Yamanote line back to our temporary home.

We were finally beginning to adjust to the jet lag, so we decided to stay up for dinner this time and head to the fancy Yakitori restaurant right down the road from us. This place was fun. Order raw meat and grill it yourself!

Devastatingly good. Look at that marbling. 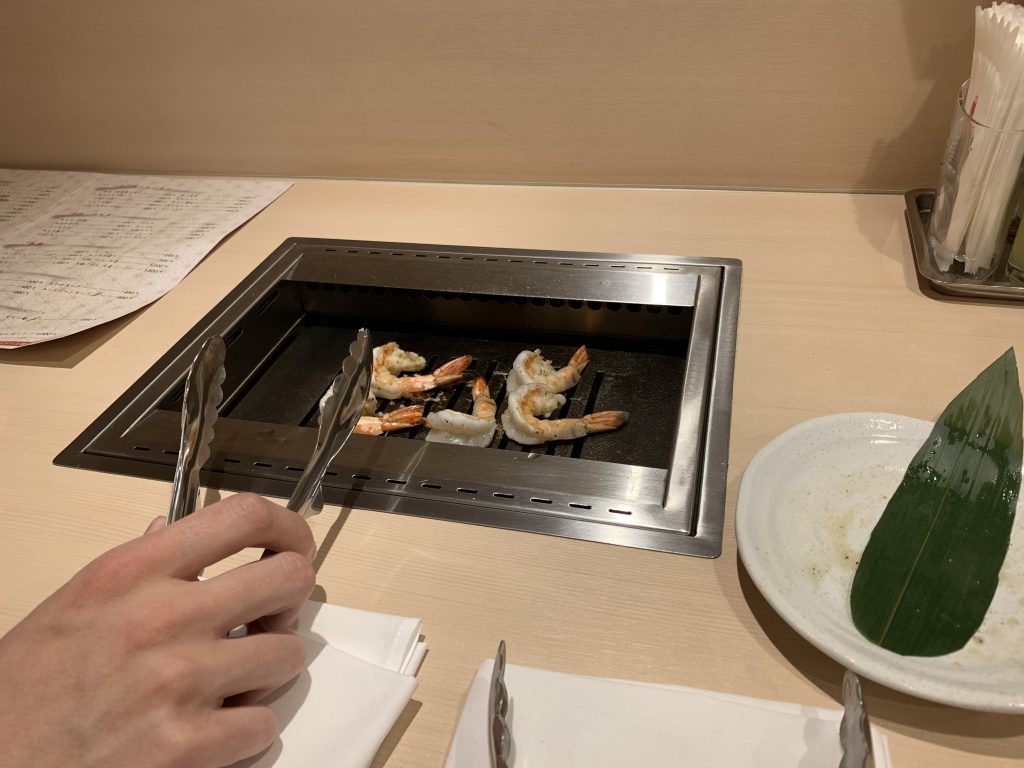 This kind of place was totally upscale and expensive, but since it was our first proper dinner, I think it was worth it. It’s the kind of place that “doesn’t have pictures on the menu,” so I was handed the Gajin-baby card with a limited amount of “safe” menu items and a couple photos to point towards. While I did use this menu to start off with (since a couple things did look pretty tasty on it), I was interested in the massive menu of interesting mystery meats. I knew how to read all of the characters on the menu, but I didn’t know what each menu item actually meant. A little bit of researching between orders, and wow. Thank goodness I knew how to read those characters. The quality of meat went from “really, really good” to “HOLY SHIT THIS IS INCREDIBLE.” Do your homework, kids. It’s worth it for the meat!

…After that wonderful dinner, we went back to our hotel and prepared to do a load of laundry. The washing machines work fine, but the dryers here actually suck so hard it’s not even funny. They run both the washer and dryer on a shared 100V circuit, and even with an HOUR dry time, my clothes were still soggy. Ughk. Guess I’ll just hang an outfit out to dry and pack away the rest for later.

You can’t not get a frog-ninja.