So my sister Abbie and I have found ourselves in Tokyo – you know, as you do – wandering the streets like brain-dead sleepy zombies in search of our hotel. Actually, that was the easy part, let’s talk about the hard part:

Everything began back at home. 8AM, rush-hour traffic to LAX, a non-coffee related diversion to Starbucks, airport, security, freedom from the TSA. Abbie and I explored the gorgeous Tom Bradly international terminal since we had a couple hours to spare. Abbie decided that her breakfast was going to be KFC. Truthfully, that’s probably the most Japanese thing that she could have picked.

This was going to be my second trip to Japan, the previous trip being written about in detail here. This time, however, as mentioned above, I am not traveling alone. My baby sister, who is now an actual adult now by the way (what??), will be joining me as we explore The Land of the Rising Sun. Now, it’s just up to us to get there.

Last time, I took an American Airlines 787 Dreamliner to Japan and it was pretty nifty. This time, I’ve chosen Japan’s flagship carrier, ANA on a 777. ANA is a “five-star” airline, and it most certainly showed. Attentive and friendly staff, tasty in-flight meals, galleys stocked with lots of incredible snacks – yeah, full-service airlines rule. Only thing I could think of docking them for were their rather stiff seats that really wore on me through the flight, but that’s more Boeings fault than anything.

A note inside the bathroom. So nice.

I digress. 12 Hours in the sky is enough to make anybody go crazy, but when the service is flawless, it makes the time go by so much faster. There was also a group of young children in front of us with a baby who could have been no more than 1 year old. At the very start of the flight, this baby immediately spun up and started crying. Abbie and I feared the worst, but only moments later, that baby fell asleep for nearly the entire flight. Wow, good job kid, props to you. 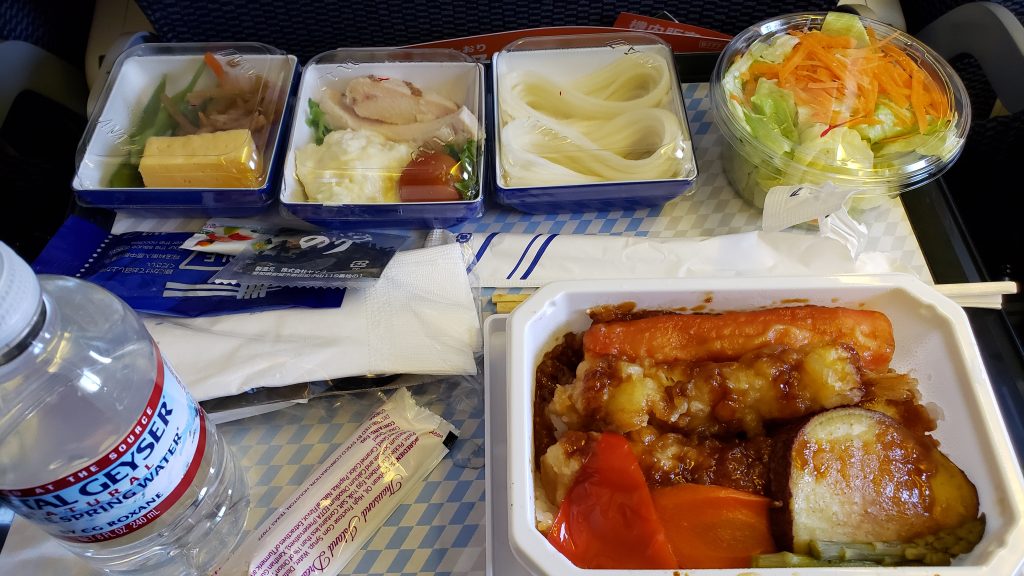 Main was a little soggy, but tasty. The sides were where it’s at though!

Eventually, we made it. As always, walking off the jetway instantly invigorates your soul with a newfound energy that you thought had left you once you crossed the international date line. We were here! Zip through immigrations, zip through customs. Easy. In fact, customs didn’t even search any of our bags like they did to me last time. Neat.

Okay, so last time I arrived in Narita, I was in terminal 2. Terminal 2 is definitely a bit more “foreigner-friendly” and has a better layout overall. I needed to find our SIM cards to use our phones and exchange our rail tickets. Finding our SIM cards took me longer than I’m willing to admit. Last time, my SIM card was available at the little post office. I assumed that this time would be no different. NEVER ASSUME. After about an hour of walking around to find the post office, we were informed that the SIM cards were delivered to a different shipping lines office, which we had already passed, at the opposite end of the terminal. Let us never speak of the SIM cards again.

Land. Japan is a sight for literally sore eyes.

After that, though, everything else was relatively smooth sailing. We exchanged our rail passes without a problem and jumped on the Keisei Skyliner train on our way to Tokyo. This was actually my first time on the Skyliner. Last time I took the Narita Express, but since we were here for a slightly awkward 15 days, I decided to activate our 14-day JR rail passes for the following day and grab the Keisei Skyliner instead. Soon, our train lurched forward and sailed into a really, really long tunnel. Wow this tunnel is super long. Why isn’t this tunnel ending…? OH WAIT, it’s dark outside?! Yeah, guess we were looking for those SIM cards for a little too long. Oh well, Tokyo is awesome at night.

Soon, we arrived at Ueno Station. Abbie had previously fought with the ticket gates and failed to get her card punched in, so I was totally waiting for her to insert her ticket and get stopped by the automatic doors. This would have been both hilarious and frustrating since we were both beyond tired. I insert my ticket, walk through the gates. Abbie inserts hers (this time, the correct way!) annnnddd…. right through. Phew. Okay, this is it. Tokyo. Get ready for your first time walking up those stairs:

Yeah, I love this city. Let’s get to our hotel. We had two options: Yamanote train line and a bit of a walk, or the Tokyo Metro which takes almost directly to the hotel. It was about 7PM at the time, so peak rush-hour. Japan is infamous for its incredibly crowded trains at this hour, so I decided to take a chance on the metro since it was heading towards central Tokyo instead of away from it. Another thing I was thankful for was my ability to read the rail maps still and use the ticket machines. Being as tired as I was, not having this prerequisite knowledge would have been a disaster. Fortunately though, I managed to grab us both tickets for the proper amounts in no time. Once we were at the station, a train departing central Tokyo arrived and it was PACKED. Uh oh, is our train going to be like this too?

….Nope. Just like I predicted, our train had very few people on it since it was heading away from Tokyo. Perfect. A couple stops later and tada! Our hotel is just across the street.

The streets were filled with many smells of delicious and tantalizing foods. We were so hungry, but also tired to the point of literal delirium. Let’s check-in to the hotel first and THEN we’ll get something to eat. Yeah no we checked in and we were done for the day. As disappointing as that sounds, trust me, the fatigue was unbearable.

As I write this at 3AM, now rested, it was time to prepare to hit the town and grab something to eat. …or maybe just the kombini for now.