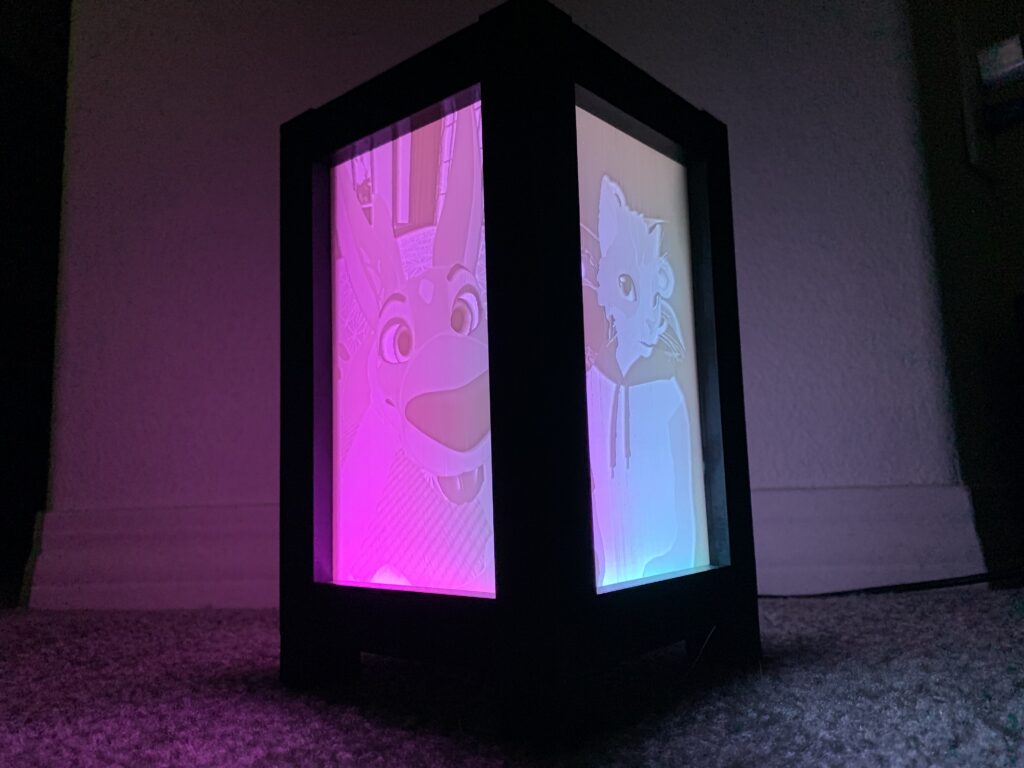 In short, this is a 3D printed lantern I designed and built that features interchangeable plastic photo panels, known as “lithophanes,” and a custom RGB LED lighting board that allows you to change the color scheme backlighting the photos to what ever you want.

So, during the pandemic, the world kinda’… well, stopped. Access to friends was limited, so admittedly, it got a bit lonely. However, I had picked up a virtual reality headset earlier in the year and I decided I was going to put it to use playing a social game called “VRChat.” VRChat is basically just a sandbox virtual reality game where you can chose to play as any avatar you want in just about any virtual setting you can image. It’s a fantastic, sureal way to meet new people.

Long story short, I eventually established a robust friend group who I really love being with. Frequently, we visit our friend’s virtual karaoke world to sing songs together (much to the dismay of our neighbors at 3AM). This karaoke world is Japanese themed, and I noticed the little traditional lanterns decorating the level. 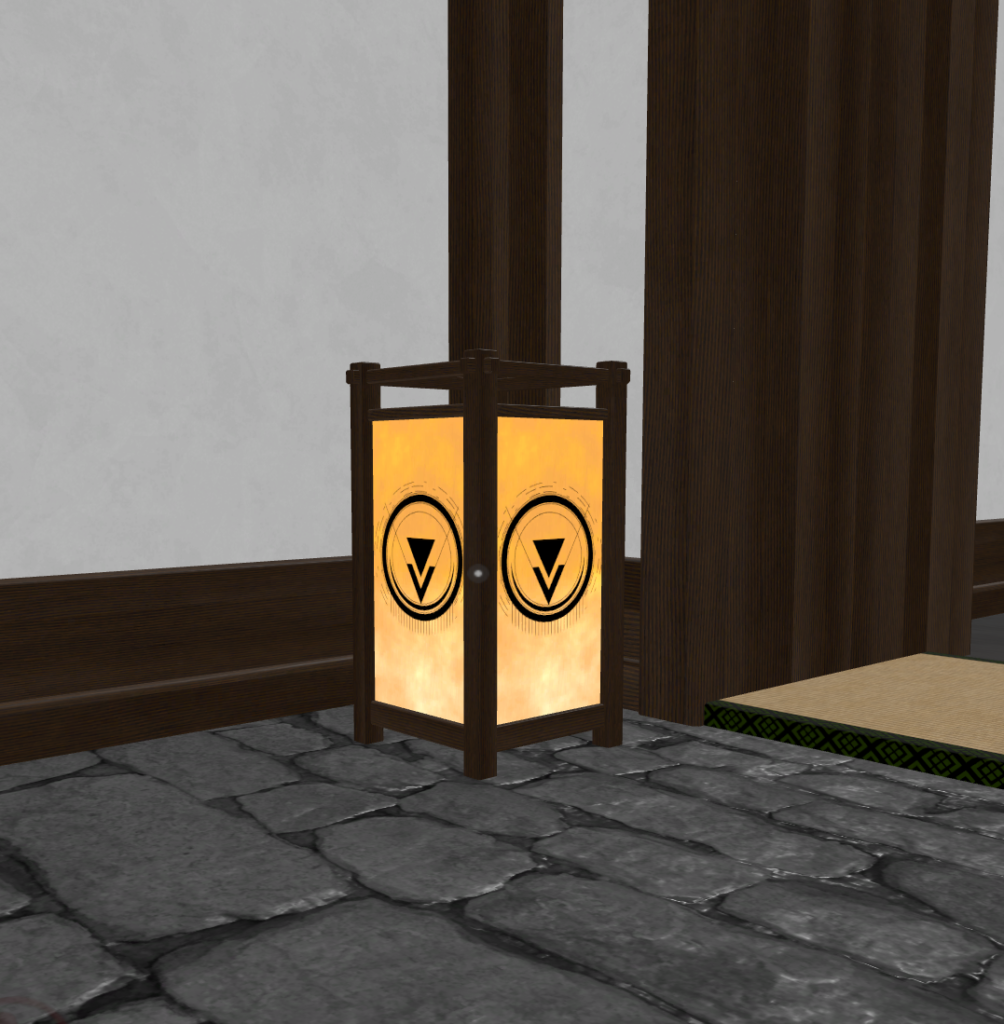 The traditional lantern design found in our virtual karaoke world that inspired me.

In a passing comment, I mentioned that it would be neat to explore lithophanes using a lantern design like this. It didn’t take long after that comment that I started theorizing designs and prototyping to bring my idea to life. I thought to myself, “What if I could create one of these lanterns with interchangeable panels featuring images of my virtual friends? Wouldn’t it be amazing if you could change the color of the lantern to what ever you wanted?” Uh, yeah!

I’m not a particularly skilled 3D artist, but I figured that the boxy shape of these lanterns wouldn’t be too difficult to model out. Spoiler: There were a lot of different things to consider about the design other than just the shape.

My tool of choice? Fusion360. As much as I despise Autodesk, there’s simply no contest when it comes to intuitive parametric 3D modeling.

I got to work designing the body and lid. There were a few main considerations for me: 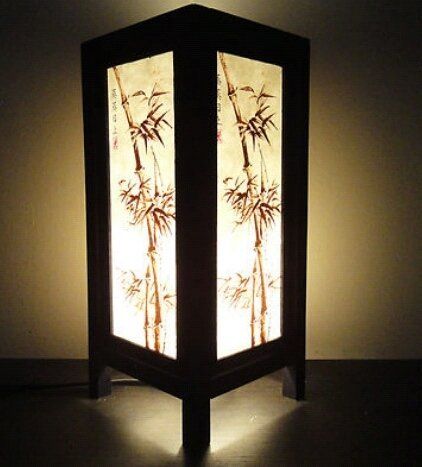 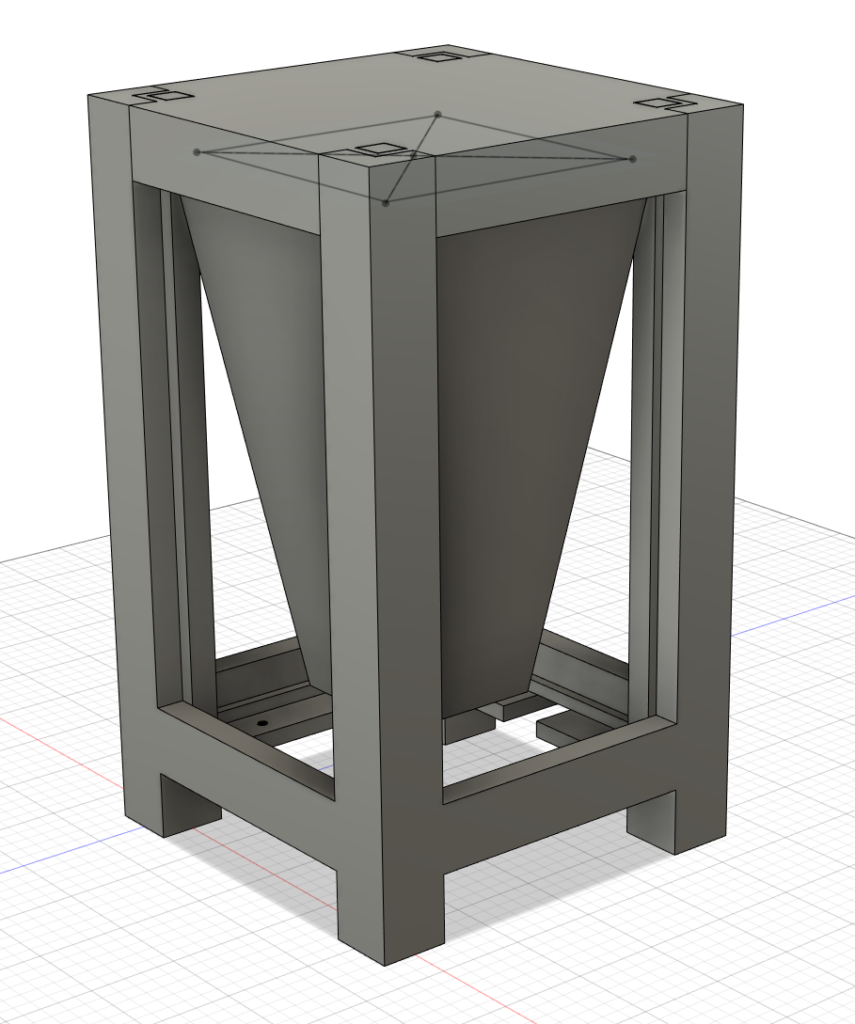 Here’s the model I came up with

Notice the slats along the sides to fit the panels into, the notch in the bottom back side to accommodate the USB socket, the mounting holes for the future PCB, the flush-fitting lid with slats on the inner walls (not seen here), the upside-down pyramid light guide, even the little ledge on the bottom of the base to hold up the lithophane panels. There was a whole lot to consider, and given than this was my first attempt, I’m pretty proud of the result!

Since the lantern body features large overhangs on the bottom section, support material is required, though, due to the boxy, high-surface area shape, supports are really not too much of an issue and are fairly easy to remove. Just be sure to be careful of support material ending up in the screw holes or along the lithophane guide-slats. 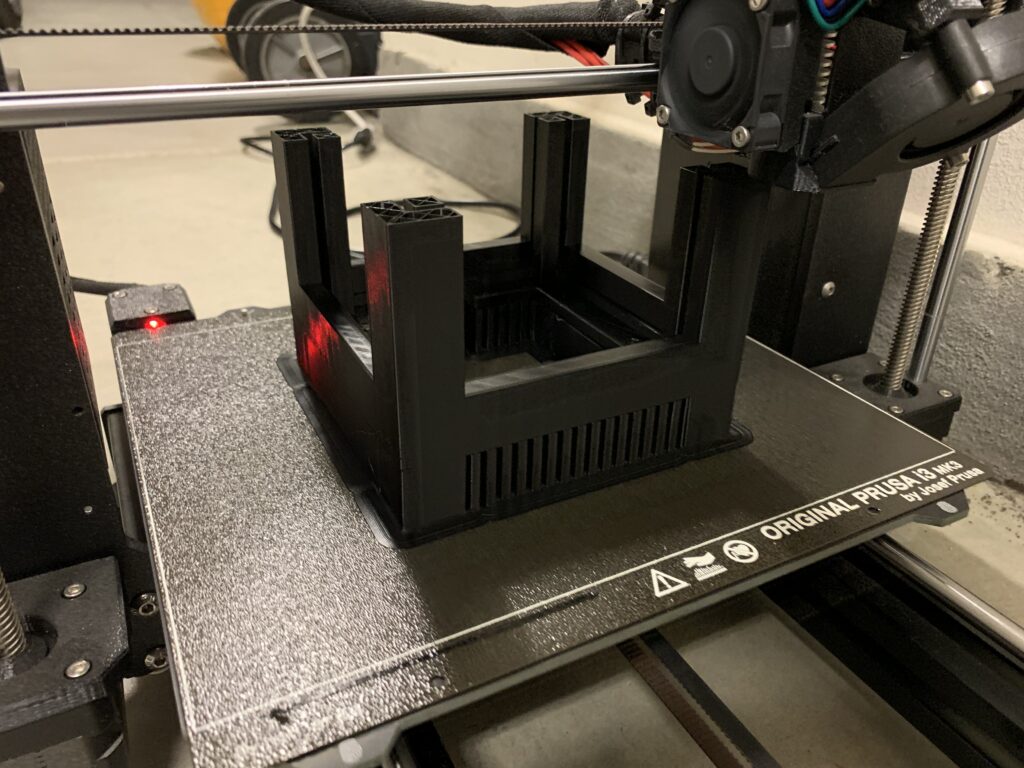 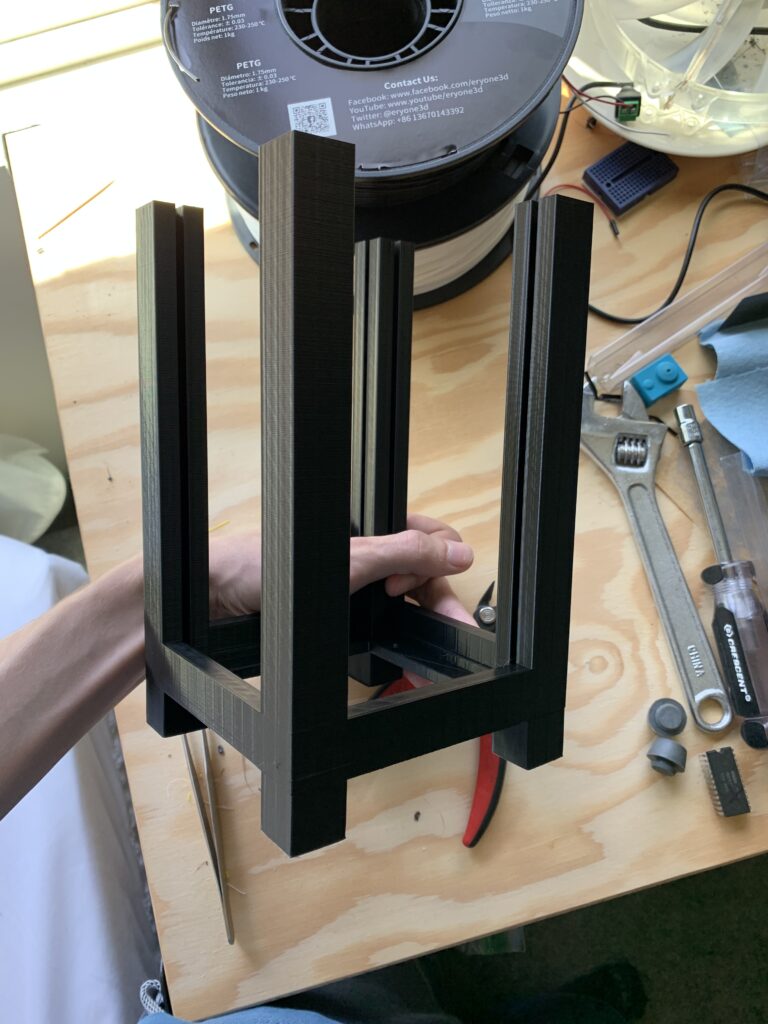 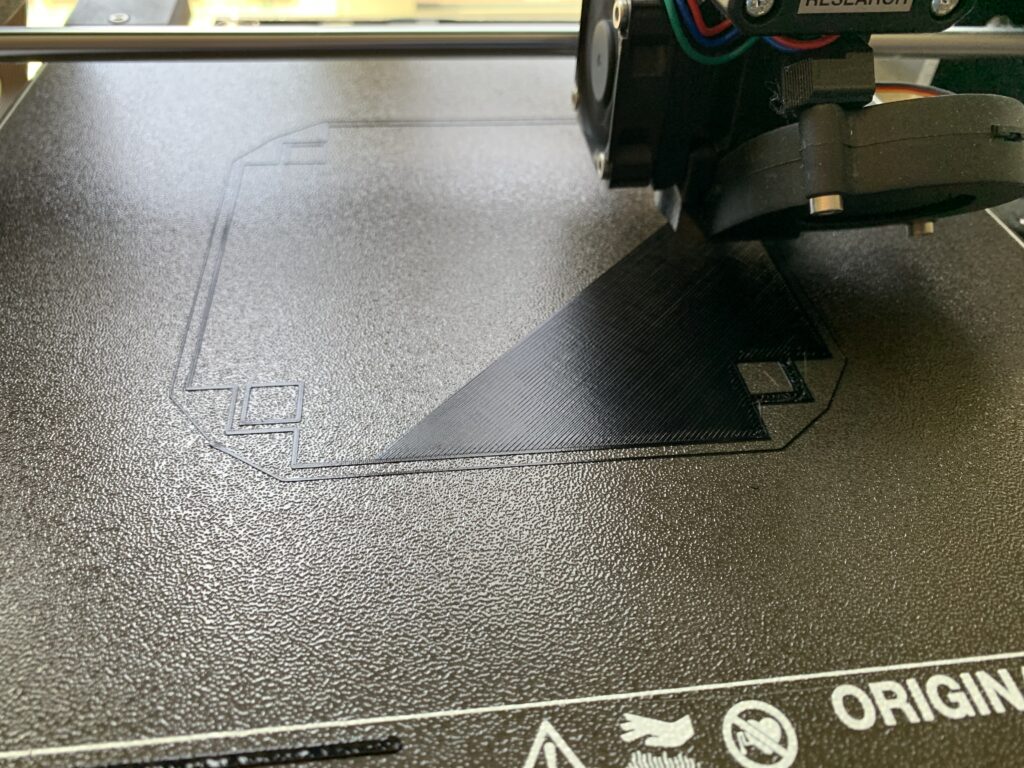 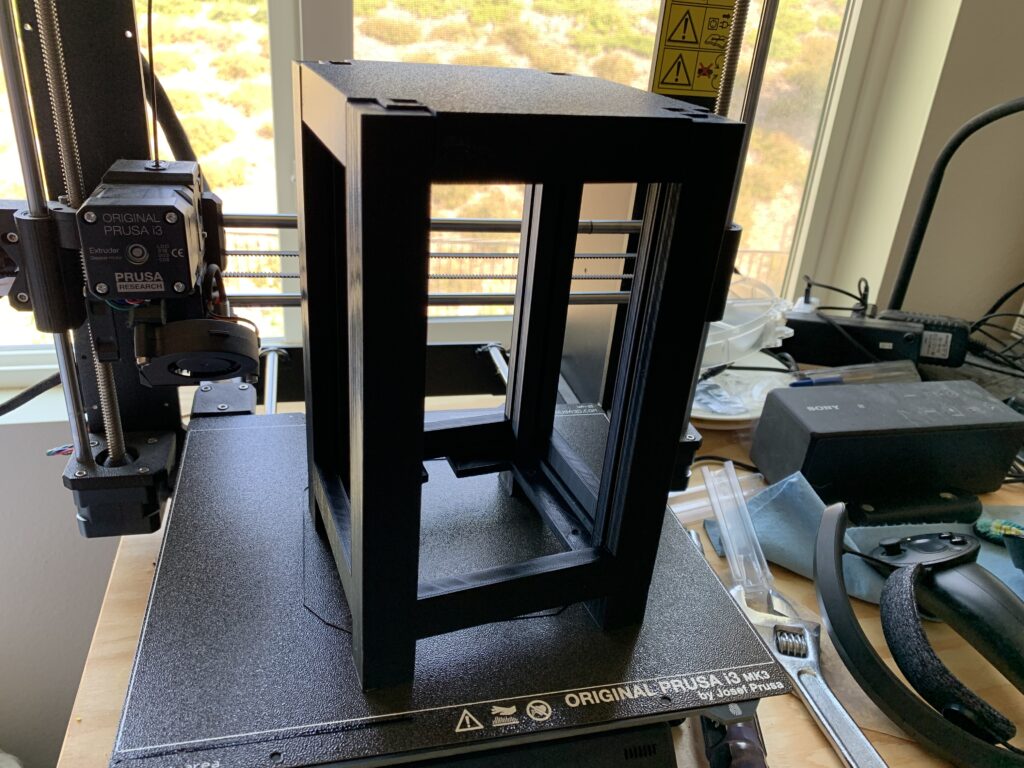 Looking alright, but it appears that the interior support bars in the lithophane slats are hard to fit flush within the lid’s square corner-mounts. This required a couple tries to get right. 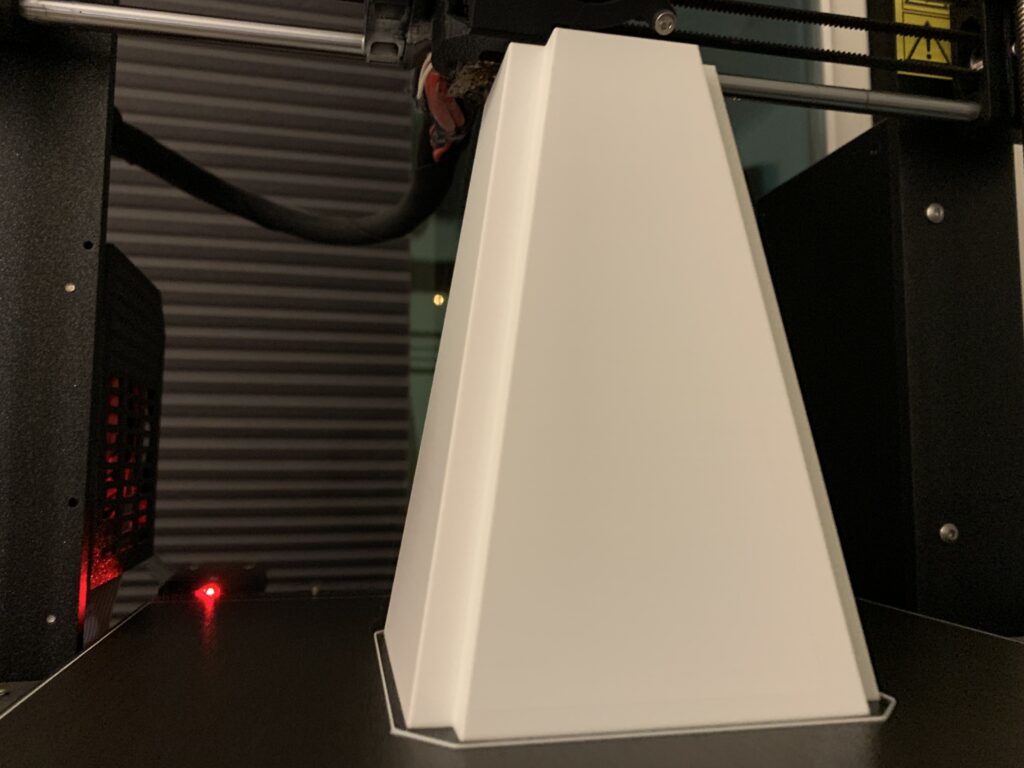 The light-guide that will be affixed to the bottom of the lid with glue! Looks like something out of a sci-fi movie.

Here’s the part I was most looking forward to: the electronics!

There are indeed pre-made products a’plenty out there that would probably get the job done just fine, but where’s the fun in that? Here, we go full custom.

Therefore, I needed to consider my goals once again before I went to work designing this circuit board. 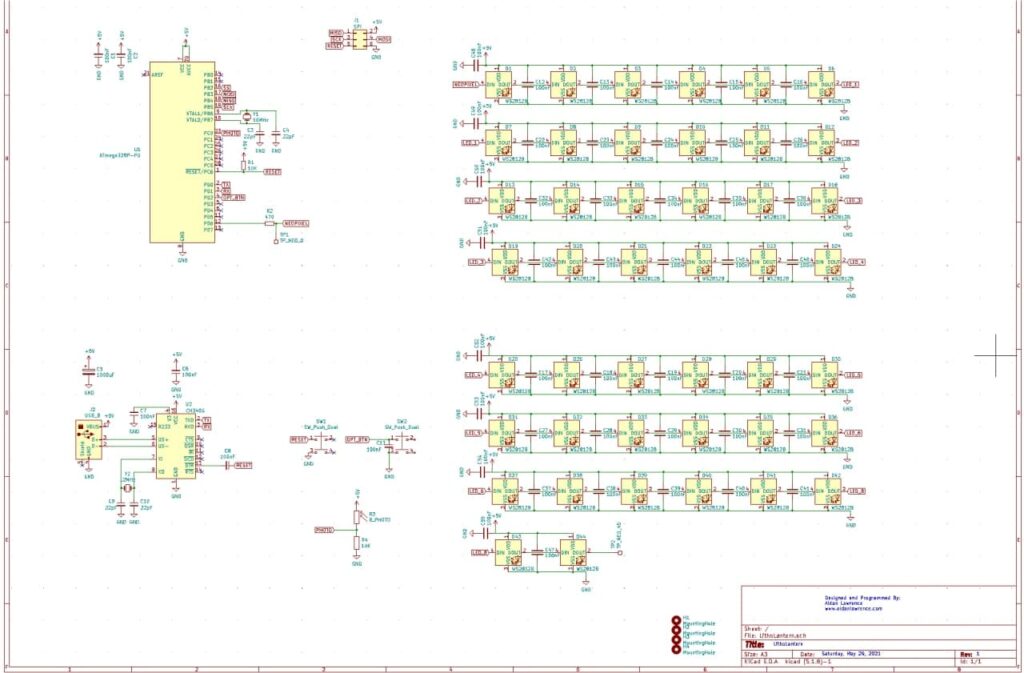 Boy, all those LEDs were a pain to hook up. Don’t forget your bypass capacitors on each one! 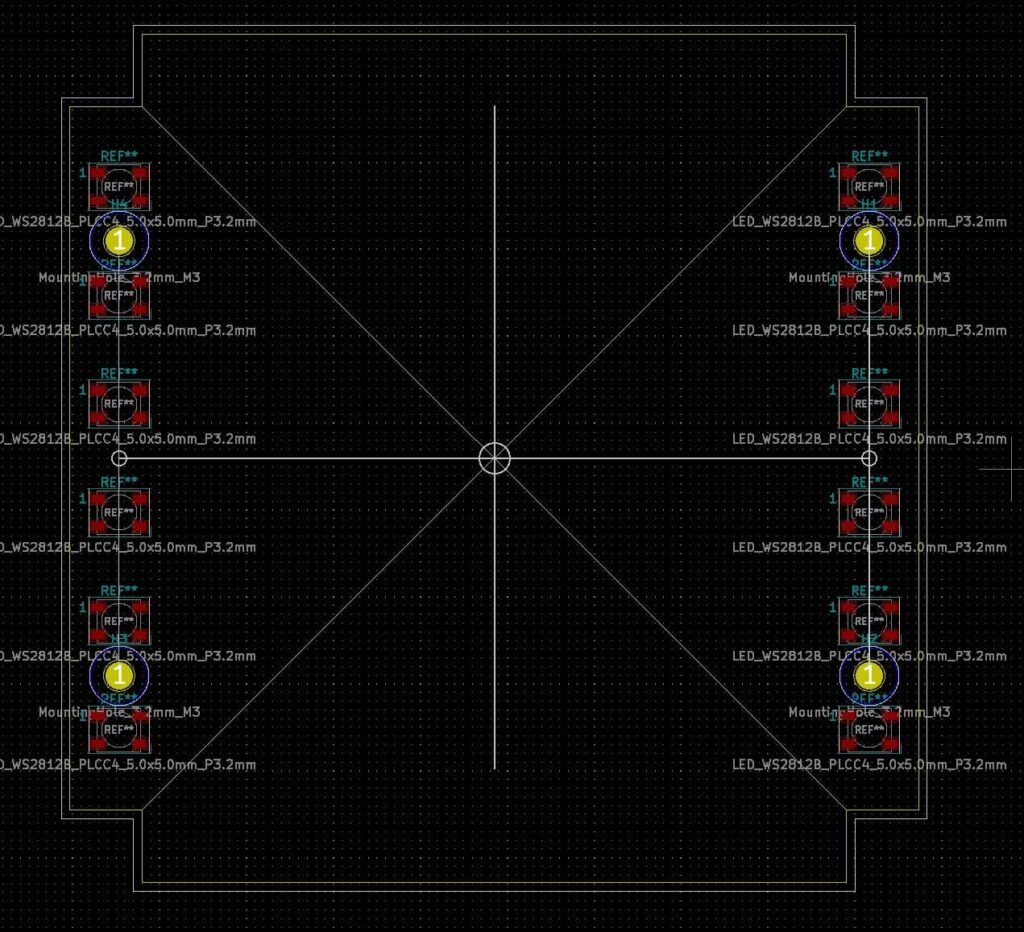 Drawing out the board, making sure the dimensions were correct, positioning the screw-holes, and determining how many LEDs to place was a huge challenge, but I nailed it! I actually did this before designing the schematic. Notice that here too I accounted for tolerances. The yellow perimeter is the actual board side, the white perimeter is the interior outline of the lantern’s seating plane. 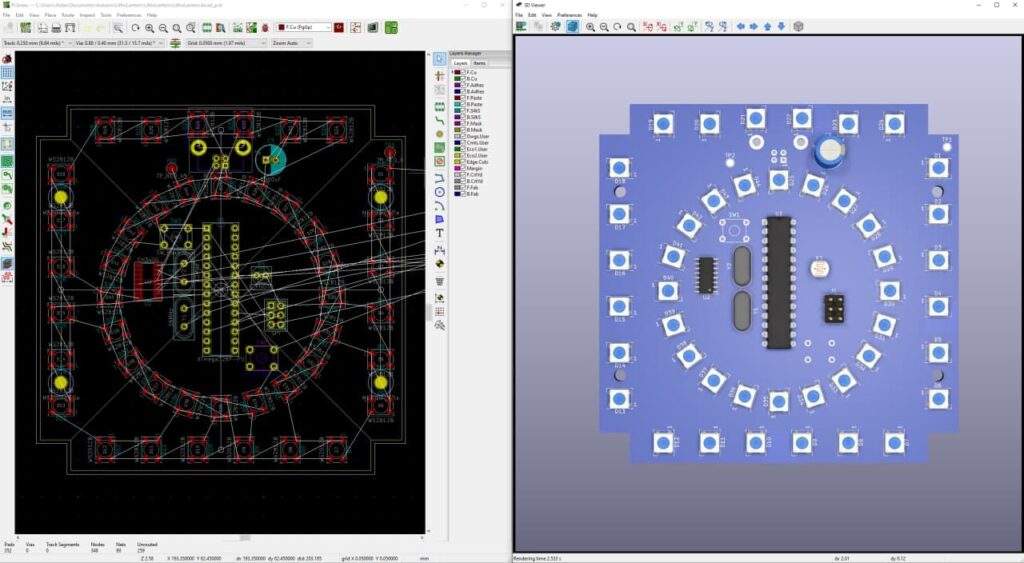 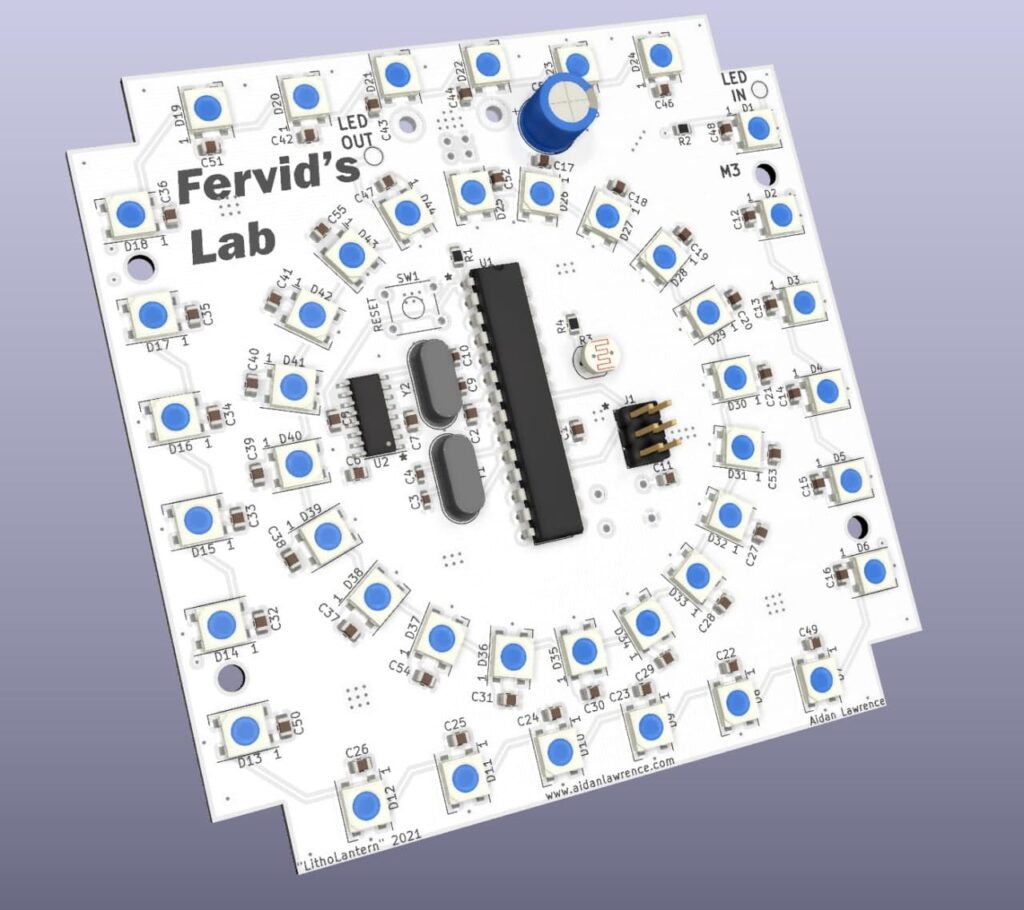 Looking good! The PCB was originally going to be white to reflect light better, but this made my PCB costs explode by a factor of 4, so I eventually changed it to the far-cheaper black color solder mask. 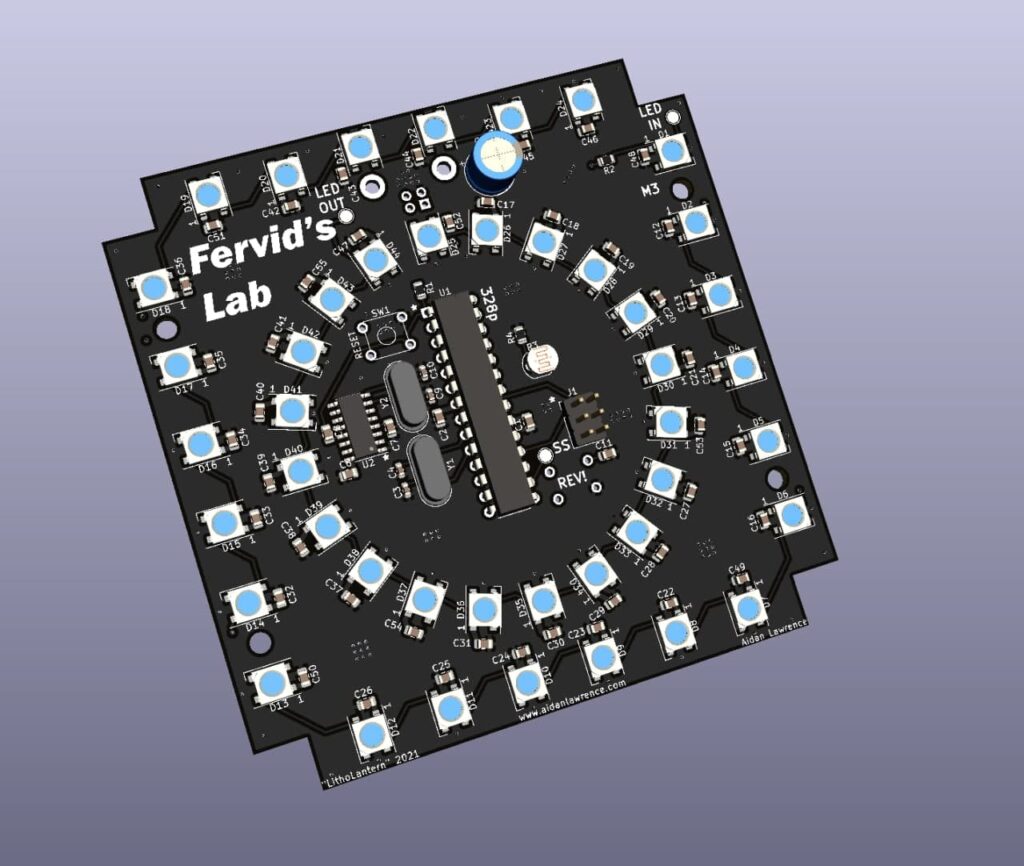 About a week later… 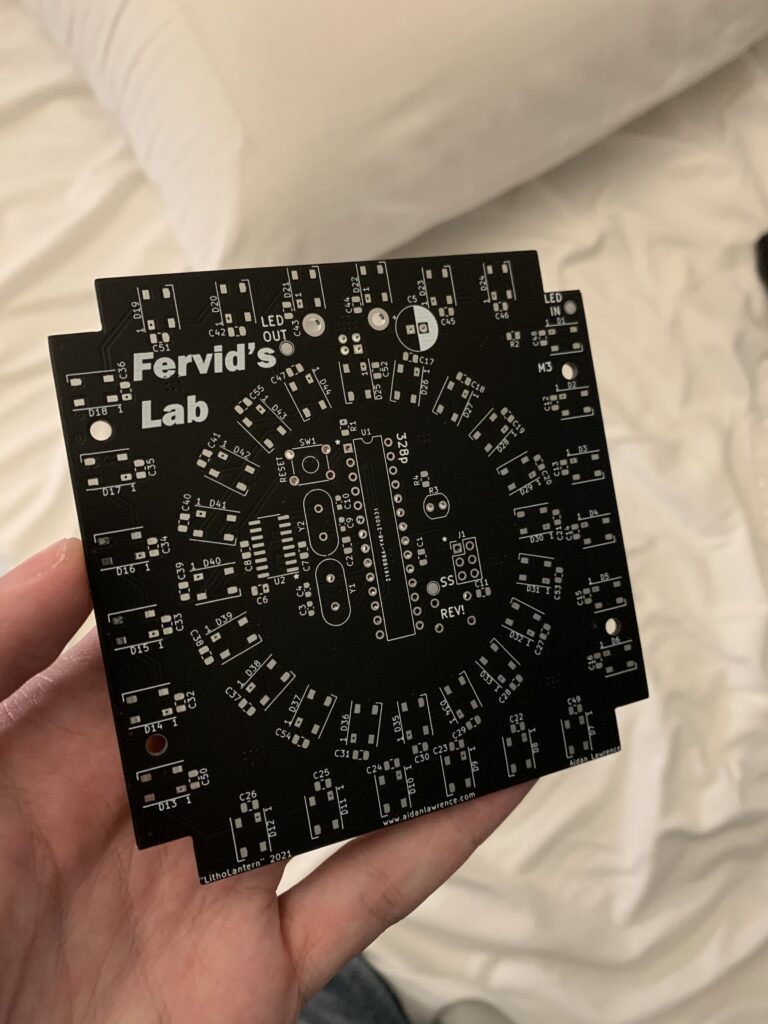 Beautiful! By the way, “Fervid” is my online pseudonym, hence “Fervid’s Lab.” I also play as a virtual tiger, so big cats on the silk-screen!

Let’s get it all put together, programmed up and…

Forgive the camera faceplant. This was just a quick test video and I ran out of hands. But, as you can see, we’ve got a bunch of really pretty, individually programmable lights! Tada!

The order of the LEDs starts at the top right corner (right of the USB socket), and goes clockwise. After the last LED along the sides, the inner ring is addressed starting at the top center going clockwise again.

Can you believe that I did all this without testing if I could even make a viable lithophane first? Perhaps that was a poor idea, given how much time and money I’ve put into the project already, but hey, this stuff is exciting.

I’ve never actually attempted to print a lithophane before, so this was going to be an interesting experience.

It’s actually not all too difficult to create a lithophane as there are several free websites and programs dedicated to converting your photographs into printable 3D models. My personal favorite is this site: https://lithophanemaker.com/Framed%20Lithophane.html

I feel like these settings worked best for my project. The frames come out perfectly and fit nicely in the lantern. Notice how I’ve rotated my image beforehand. I think this preserves a lot of the detail. 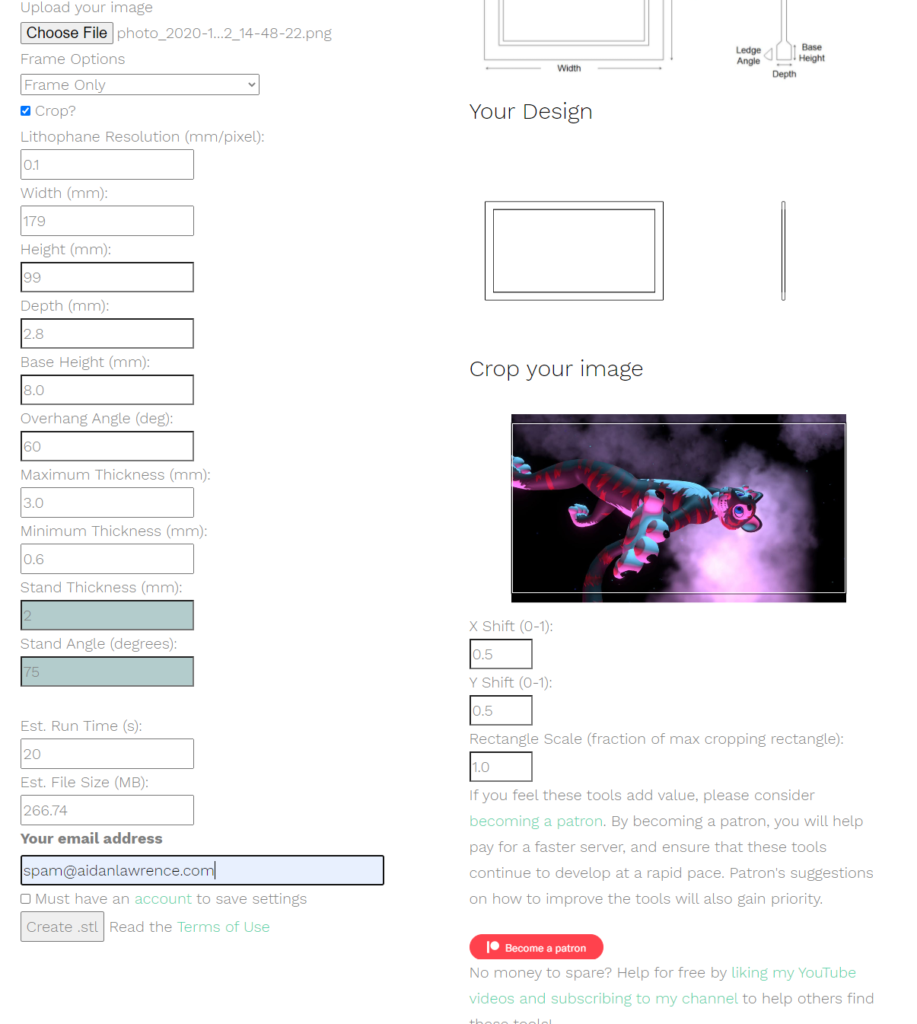 Here was the result:

A panel of the tiger character I play as! I’m always blown away at the level of detail in these lithos. It’s like magic.

After a bit of research, I’ve found that lithophanes print best when they’re printed on their sides, rather than flat on the print bed, which is counterintuitive at first, but makes sense when you consider that the print head moving across your photo would leave unsightly marks if it was flat on your print bed. Therefore, a brim is practically required for your print to stay affixed to the bed while printing. You will also want to make sure that the lithophane’s longer dimension is moving with the print bed (Y-axis) rather than with the print head (X-axis), as you want to reduce the leverage and inertia acting upon the fairly precarious vertical print. PLA is my personal plastic of choice since stringing and warping is minimal.

A layer hight of 0.1mm produces great results. You’ll also want to make sure that your infill is set to 100%.

Here is an example of my Cura slicer settings: 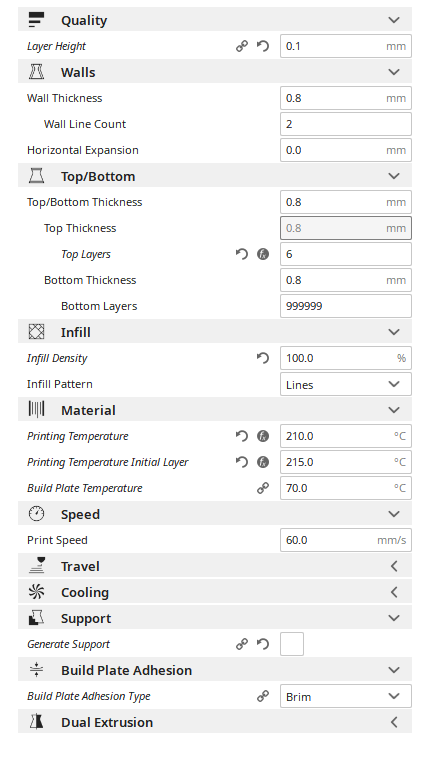 You may want to experiment with your temperatures a bit as I tend to run my PLA a little on the hot side. 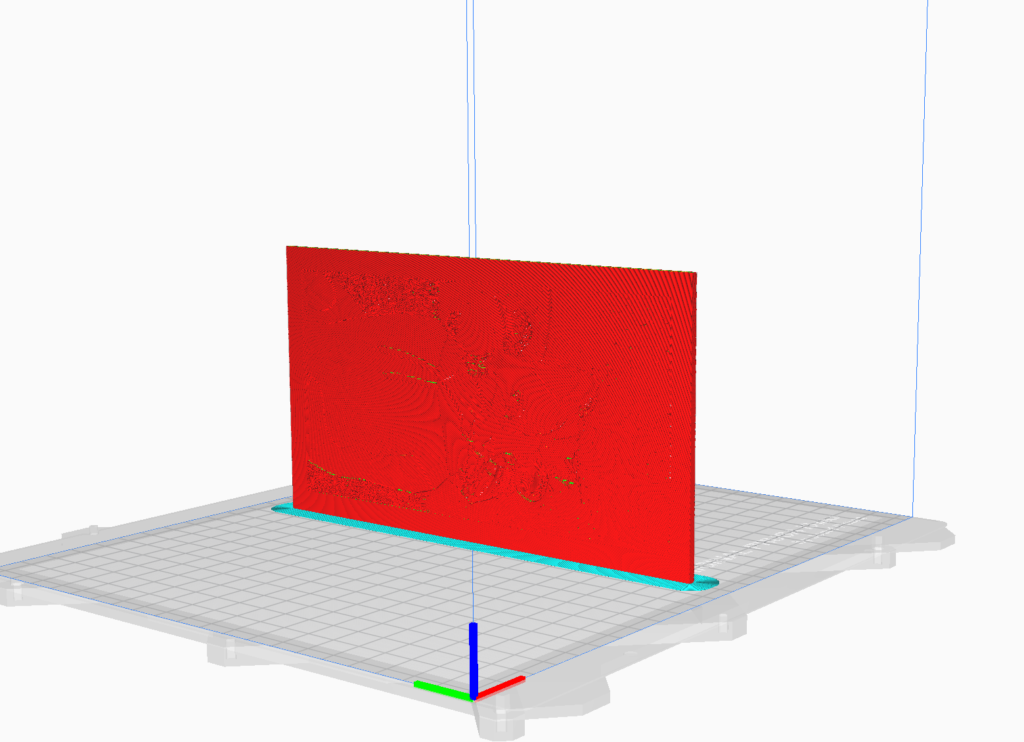 A panel sliced and ready for printing. Notice how the panel is on it’s side with a brim and is aligned with the Y-Axis. Send it to the printer and get ready to wait for about 12-16 hours!

After your print is finished, you can remove the brim with a set of needle-nose pliers, a little bit of elbow grease, and a knife to clean up the sides. you want to make sure the brimmed edge is flush to ensure that it fits in the tight-tolerance lantern body slats.

Once everything was finally printed out and put together, this was the final result…

…Featuring portraits of lots of my friends in their virtual characters! And, uh oh, looks like one of my LEDs in the center ring died, preventing the others in the chain from lighting up. WS2812’s are sensitive to ESD and heat, so I wonder if I shocked it on accident or if the reflow oven busted it. Oh well, the lantern still looks great and I’ll get that fixed up!

I’m really impressed at how well the lithophanes came out. For example, here’s an original image and the resulting litho… 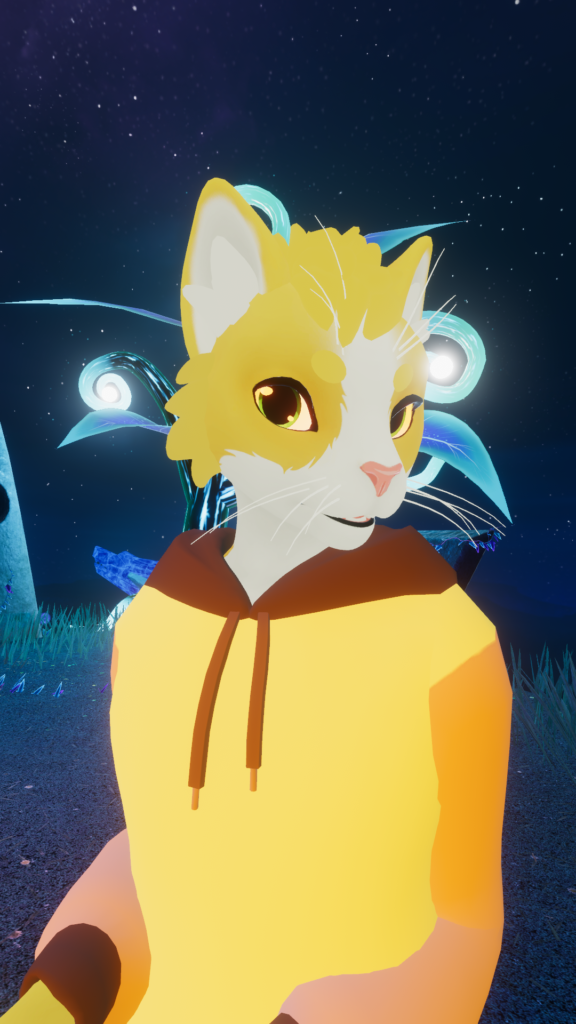 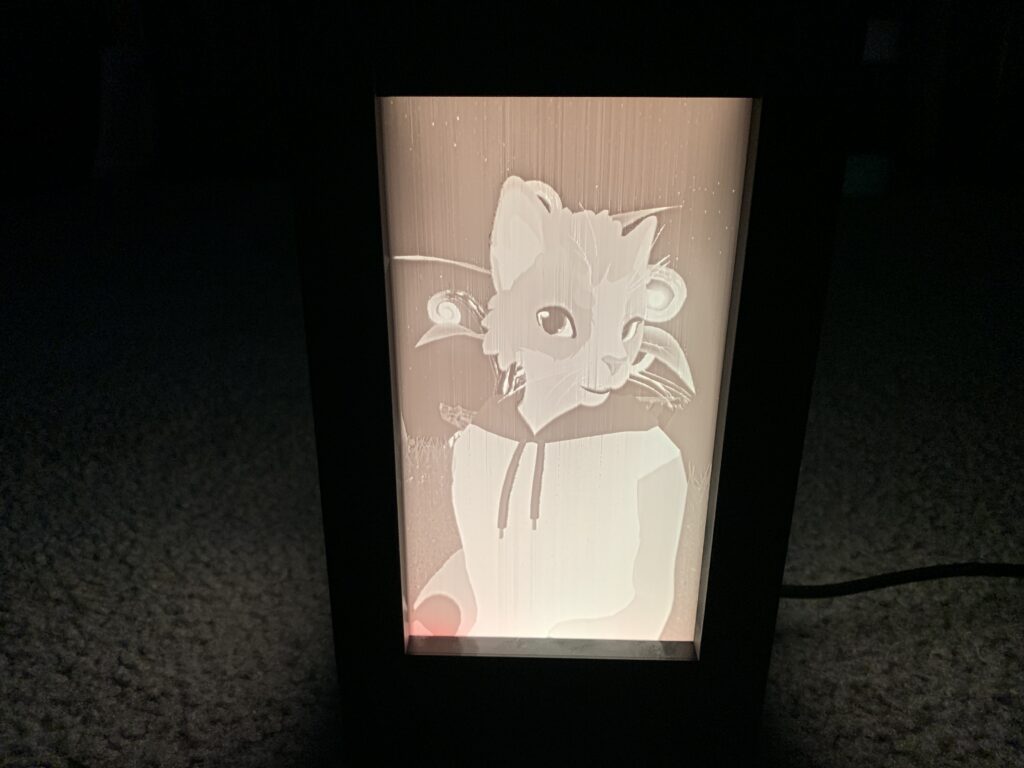 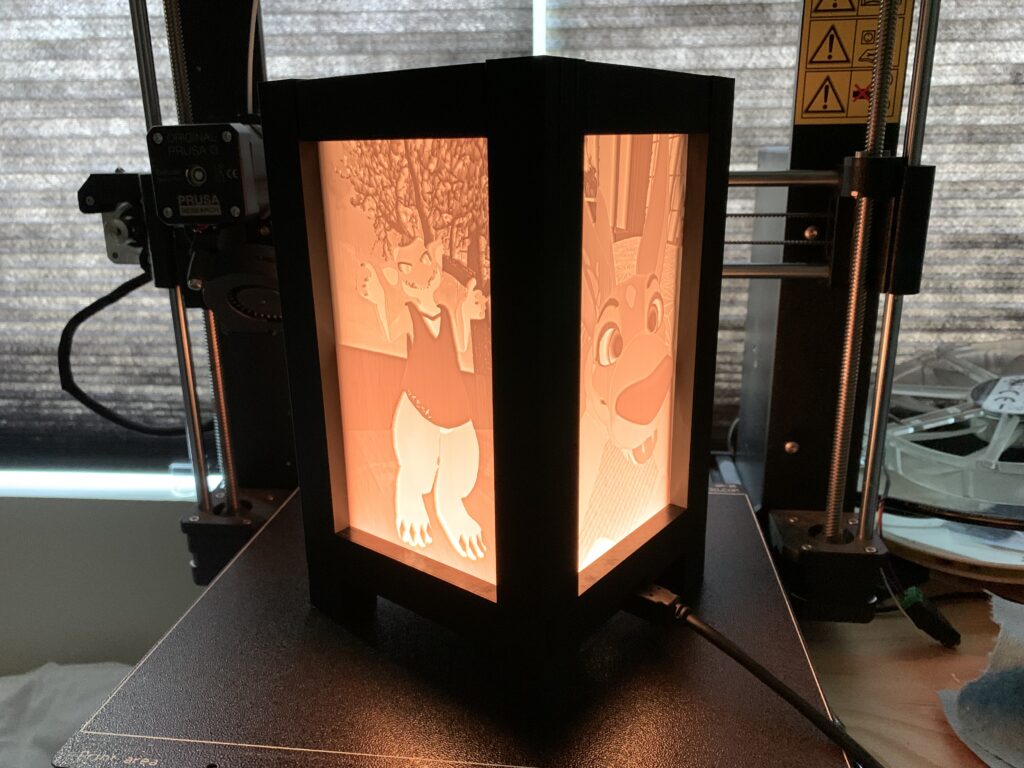 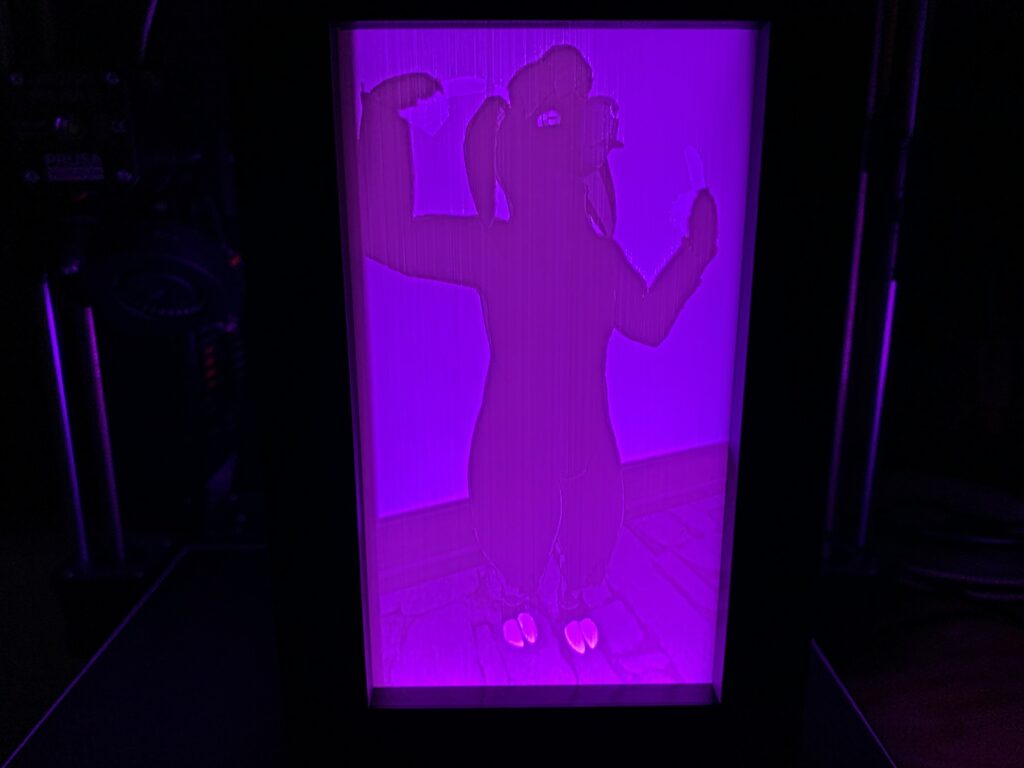 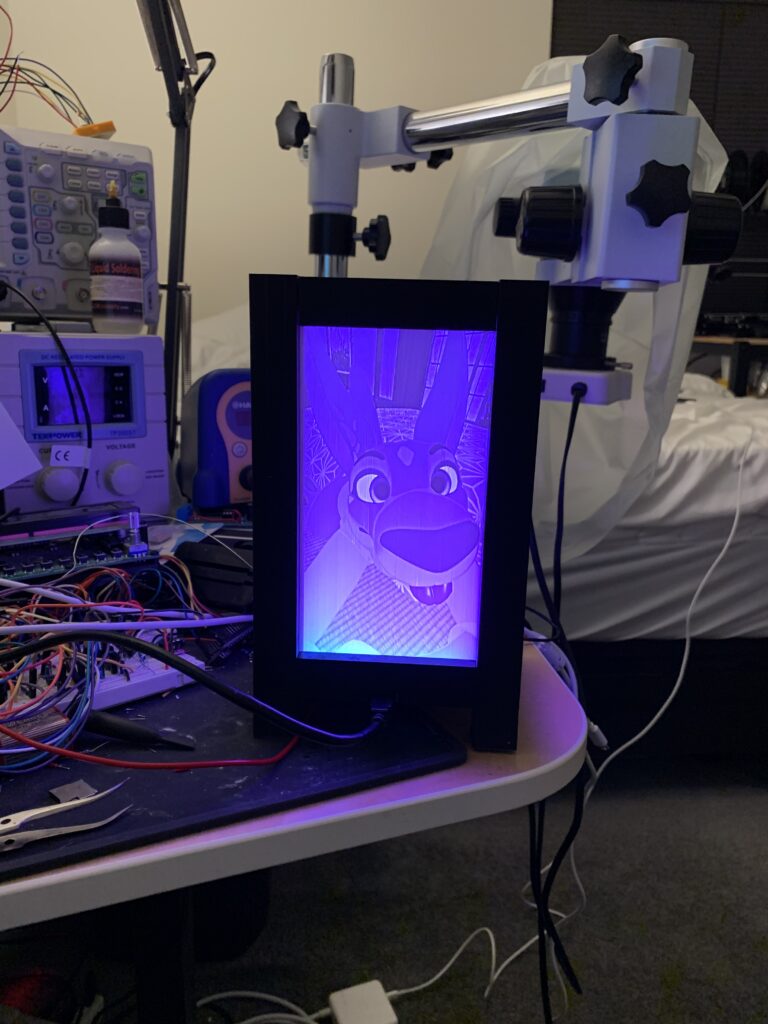 The ability to change the colors on each panel is super awesome. This was a really fun project with an excellent result for just winging it on a whim. My camera seems to struggle capturing the colors of the lantern as it’s seen in real life, so the colors are much more subtle when viewed in reality. 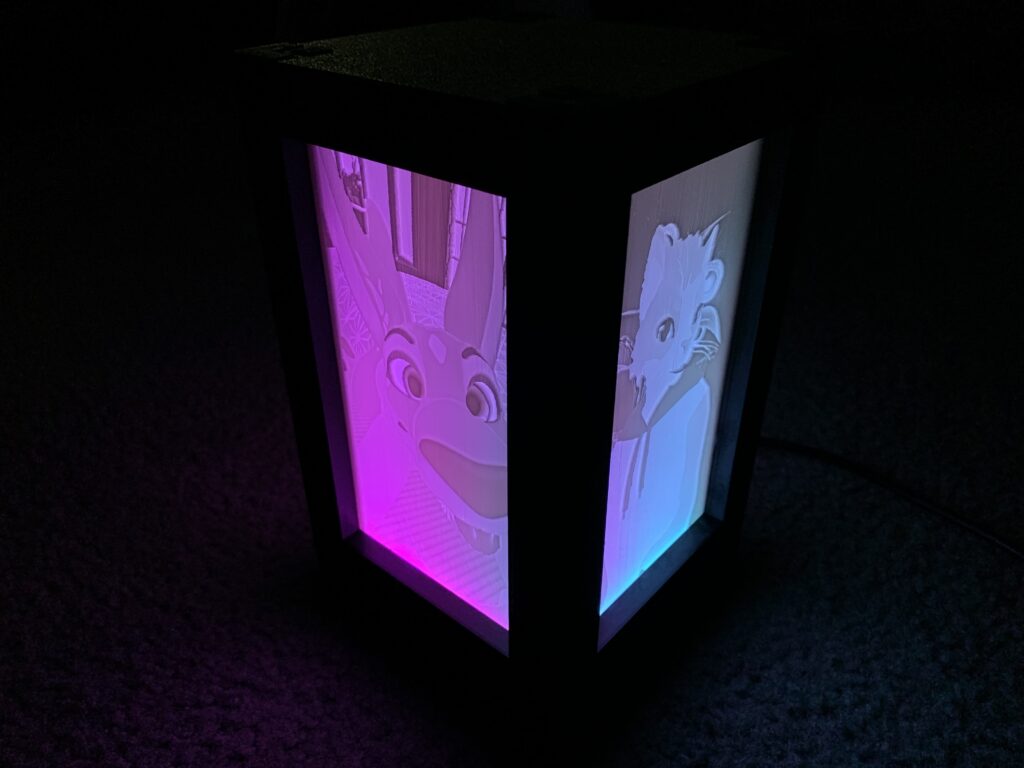 …And, the ability to swap lithophane panels is also really cool! Let’s say you’re playing a game of Murder and your friend decides to shoot you in the face for no reason. Well guess what? You can just swap their panel out for a new friend!

I’m thinking about cleaning up this project and making it open. In its current state, it works pretty well, but isn’t really polished enough for any person to just go out and build one. There’s quite a bit of first-hand knowledge required to get it to run properly, so I’d like to make it a lot easier for others to assemble and program. For now though, I’ll just keep it as a personal project that I thought would be really cool to make and share. Hope you enjoyed learning about the process!